In advance of ABcann Global (TSXV: ABCN) trading publicly in the very near future, we hosted CEO Aaron Keay to discuss the company. Keay began by reviewing the corporate presentation (download the slides) and then answered several questions. A recording of the full webinar is included here, with a summary below.

Aaron discussed the history of the company as an LP since 2014, its $47.5mm of capital raised to date and its expansion plans to double capacity at its first facility and to complete its second facility with a targeted 40mm gram production capacity.

ABcann has experienced a very high customer retention rate and abandoned wholesale sales in December due to an increase in its patient base which appreciates its organically grown product. Keay described founder Ken Clement’s vision to attain consistency in output and how the company has partnered with Dr. Michael Dixon and the University of Guelph by investing $1.5mm into research to produce standardized pharmaceutical grade cannabis. The company has attracted the attention of Syqe Medical, which has been testing its product due to its consistency for potential inclusion in its innovative inhaler device.

Keay explained the company’s computer-controlled pod-based growing method that controls air quality, CO2 levels, oxygen levels, water quality and volume, light spectrum and cycles, temperature and humidity, plant nutrition and the curing process. The ultimate benefit to the company is that it achieves substantially higher yields per sq. ft. ABcann is able to achieve substantially higher production as measured in grams compared to the total space devoted to flowering rooms. He cited savings in several areas, including water, electricity, fertilizer and pesticides (not used by ABcann).

The company plans to double capacity in its Vanluven facility to 2mm grams per annum this year. It will be building out its Kimmett facility, which can ultimate yield 1.2mm sq. ft. It owns the 65 acres and will initially be building a 71K sq. ft. facility with 20mm grams of potential production per annum assuming double-tiering. 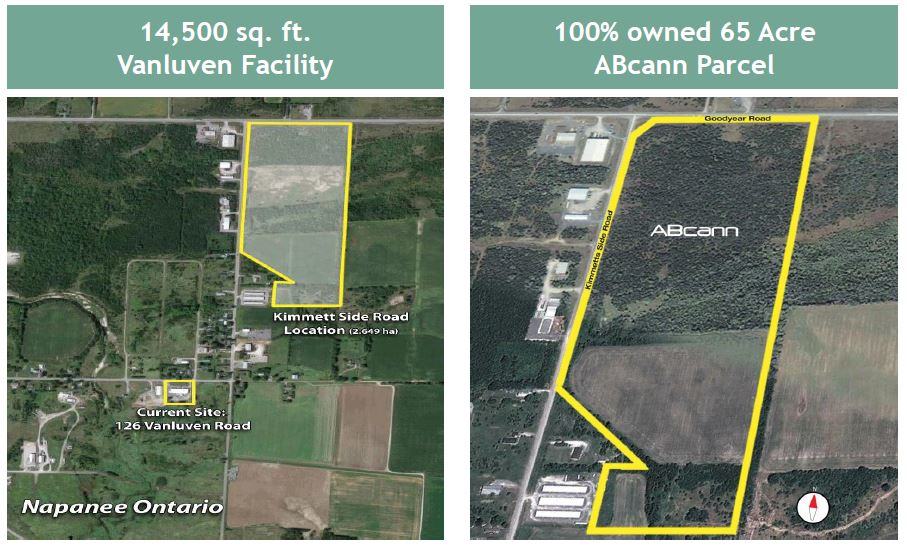 Keay shared a timeline of near-term objectives and discussed the capital structure of the company, which upsized its recent transaction to $10.mm at $0.80 per share and also included a $15m convertible note ($1.05 conversion) that was sold to a single institutional investor. More information on the capital raise is available here.

Aaron discussed the capabilities of his directors, management team and advisors and hinted at a new advisor the company will name shortly. He summarized the story and indicated that the stock should be trading soon, most likely in this coming week. The company will be listed initially only in Canada, but it intends to get an official U.S. listing (OTCQX) 30-60 days after trading commences.

As far as positioning for the recreational market, Keay suggested that ABcann Global will create a separate company to address the market beyond what ABcann Medicinals is doing and will be aiming for a lower priced product. He is considering acquisitions, joint ventures and the creation of its own branding. He also suggested that the company will be creating a partnership to create extracts over the next six months as opposed to building an effort on their own. He sees the company as most likely providing its cannabis to other companies who want to create branded products.

As it relates to Germany, the company sees the opportunity as being very similar to Canada. The company will be applying for one of ten initial licenses and feels it meets the strict criteria, including having shown three years of required production experience. He expects that the new German program, which includes pharmacy distribution and insurance coverage, will inspire other European countries. Down the road, the company has interest in Israel and Australia as well.

Keay discussed the cost of production, which ranges from $2.50 to $3.50 per gram now, depending on the method of calculation, and he expects it to be $2.00-2.25 after the new facility is operational.

Aaron discussed his outlook on capital raises, and he expects that LPs may begin to make investments in other LPs. Cronos Group (TSXV: MJN) (OTC: PRMCF) has been an investor in ABcann for a while. He also pointed to a deal by Aphria (TSX: APH) (OTC: APHQF) for a non-conventional debt deal that points to other ways to access capital. He indicated as well that the initial float will be about 25mm shares.

I asked Aaron about his current medical cannabis products, which use non-conventional names. The company, after extensive study of its patients, decided to abandon street names. Interestingly, the company has settled on just 7 strains, and it offers up to three lines of each of the strains, including milled, standard and premium (hand-trimmed), depending on crop availability.

Aaron suggested that what really differentiates ABcann from its peers is the consistency of the product, as the industry has had too much variability to date. Medical patients and cannabis consumers have the right to get the same product they expect each time, similar to a glass of wine or other forms of medicine.

To learn more about ABcann Global, please visit this page. You can also contact the company by filling out this form or, alternatively, emailing invest@abcannglobal.com.