Trulieve Completes Merger and Listing on the CSE

Trulieve also announced today that the Subordinate Voting Shares of Trulieve will begin trading on the Canadian Securities Exchange (the “CSE”) under the symbol “TRUL” on September 25, 2018. A listing statement with information about Trulieve and prepared in accordance with the policies of the CSE will be available on SEDAR at www.sedar.com.

Trulieve US is the first and largest fully-licensed medical cannabis company in the state of Florida and serves over 80,000 patients. It is completely vertically integrated with over 450,000 square feet of cultivation facilities with a further 95,000 square feet to be added in 2018. Trulieve US operates a “good manufacturing practice” certified processing facility that produces 90 different private label, medical grade cannabis products that are sold through 17 company-owned dispensaries.

“Trulieve US was built with a patients-first mentality by focusing on improving access to medical cannabis while producing the highest quality products in the industry,” said Kim Rivers, CEO of Trulieve. “Achieving this important milestone of a public listing enhances our ability to expand and serve more patients while allowing investors to participate in our growth.” 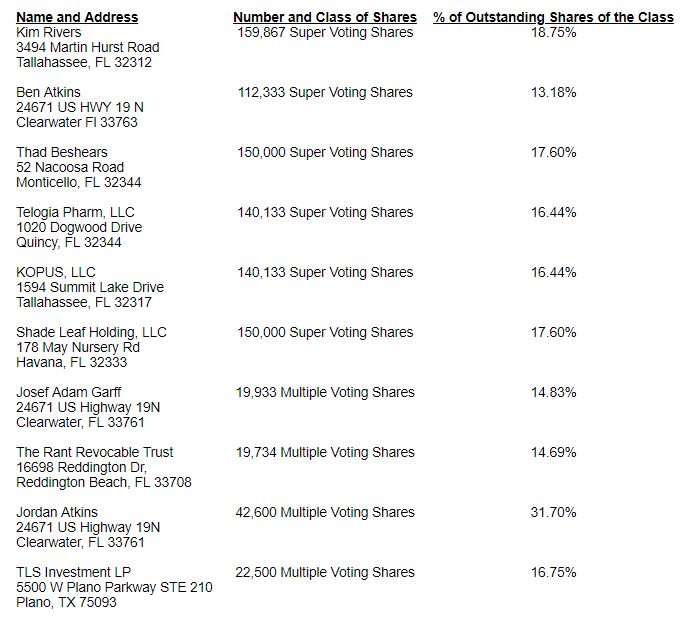 Prior to the closing of the Transaction, none of the above listed persons owned or controlled any shares of Schyan Exploration Inc. Each of the above listed persons may increase or decrease its investment in Trulieve depending on market conditions or any other relevant factors. The head office address for Trulieve is 6749 Ben Bostic Road, Quincy, Florida 32351, U.S.A.

Trulieve is a vertically integrated “seed to sale” company and is the first and largest fully licensed medical marijuana company in the State of Florida. Trulieve cultivates and produces all of its products in-house and distributes those products to Trulieve branded stores (dispensaries) throughout the State of Florida, as well as directly to patients via home delivery.