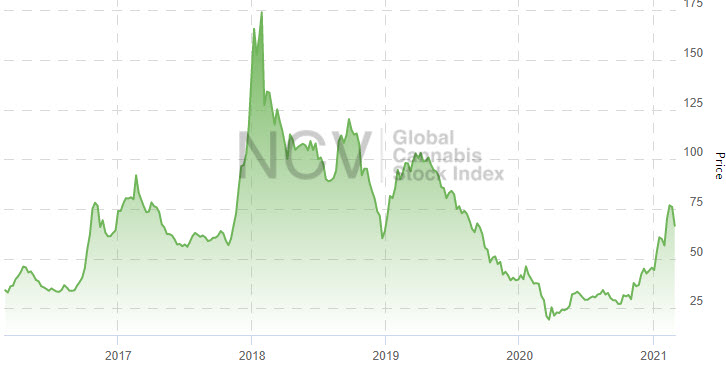 The strongest 4 names in February all gained at least 66%:

Taat Lifestyle and Wellness, which is focused on tobacco-free alternatives to cigarettes that contain CBD, was last month’s worst performer. During February, it issued 8 immaterial press releases detailing the rollout of its products. Organigram extended gains from January as it benefited from continued interest in Canadian LPs that trade on higher exchanges in the U.S. The stock is up 128% in 2021. Clever Leaves which was unchanged in January, caught up to the market move this month. It began importing CBD into the U.S. and also named a new CFO. Aphria, one of the strongest stocks in January, continued its leadership and is up now 158% year-to-date. During February, it received HSR clearance for its is pending acquisition of Tilray.

The 4 weakest names in February all declined by more than 5%:

Canopy Growth, which had a strong January, retraced some of its gains, leaving it up 33% year-to-date. The company reported its fiscal Q3 during the month and closed the plan of arrangement with RIV Capital. It also filed a preliminary prospectus for the issuance of up to US$2 billion in equity. Hydrofarm issued guidance for 2020 organic revenue growth of at least 20% during 2021 late in the month. Neptune Wellness released its fiscal Q2 financials, which were worse than expected, and it also raised capital. Aurora Cannabis, which is up 27% year-to-date, reported its fiscal Q2 during the month as well.