Cannabis stocks, as measured by the Global Cannabis Stock Index, fell slightly again in May, declining 2.3% to 104.89, after advancing in the first part of the month and then pulling back: 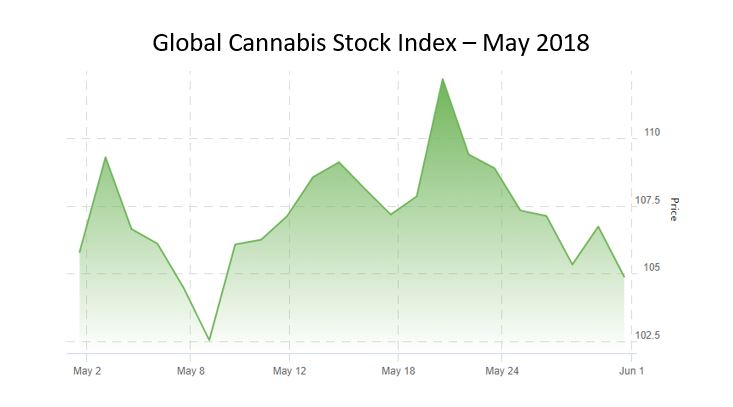 The index, which went through its last quarterly rebalancing at the end of March and has 68 qualifying members that were equally weighted at the time, declined 24.5% in the first three months of the year and, after two more modest monthly declines, has decreased 26.2%. Despite the losses, the index is still up almost 85% since bottoming in late October.

Companies listed on the OTC performed slightly better than those listed in Canada or Australia, though this was due primarily to strengthening of the U.S. currency. Canadian licensed producers, a subset of this index, were modestly higher in May. 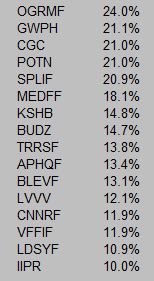 Among the winners, Organigram (TSXV: OGI) (OTC: OGRMF) attracted attention most likely due to a strong quarterly report as well as speculation about further consolidation in Canada. MedReleaf (TSX: LEAF) (OTC: MEDFF) rallied on its proposed acquisition by Aurora Cannabis (TSX: ACB) (OTC: ACBFF), fueling the speculation that other deals may follow. GW Pharma (NASDAQ: GWPH) moved to an all-time high ahead of likely FDA approval for its Epidiolex. Canopy Growth (TSX: WEED) (NYSE: CGC) rallied on the move to the NYSE, but it may be benefiting from its position ahead of legalization in Canada.

Nineteen companies posted double-digit declines, with most of them having primary listings in Canada:

We will summarize the index performance again in a month as well as provide commentary on the quarterly rebalancing. You can learn more about the index members and the qualifications for inclusion by visiting the Global Cannabis Stock Index. Be sure to bookmark the page to stay current on cannabis stock price movements within the day or from day-to-day.