GW Pharmaceuticals (NASDAQ: GWPH) released financials for its fiscal 2018 Q3 after the close today and hosted a conference call for investors and analysts. Readers can access a full transcript provided courtesy of Seeking Alpha. As the company nears the launch of its cannabis-derived treatment for seizures in patients with rare forms of epilepsy, the investor community is focused almost exclusively on Epidiolex and its commercialization.

One of the big questions for the company  in recent quarters has been its expected pricing, and the company revealed during the conference call for the first time that Epidiolex will cost $32,500 per year on average, depending upon the weight of the patient and the dosing. The goal of the company, according to Julian Gangolli, who, as President, North America, is leading the company’s commercialization efforts, was to keep the price “in line with other branded antiepileptic drugs used to treat these intractable conditions.” The company later indicated that the price, which appears to be on the lower end of range of prices that analysts have expected, was a function of feedback from insurance companies. While GW Pharma reported that its talks with payers have been productive, it didn’t announce any formal agreements. The company also expects that Medicaid will represent an important payer, though there is still no reimbursement agreement announced.

GW Pharma also revealed that its current base of patients receiving Epidiolex through the expanded access program will continue to receive the product free of charge until it begins to migrate these patients to commercial product by mid-2019, choosing instead to focus its efforts on getting new patients. During the Q&A, no analysts questioned the financial impact of this move, which is likely to result in higher revenue over time but to depress it in the near-term.  Going into the call, the analyst consensus for FY19, which is predominantly a function of Epidiolex sales, was $135 million, according to Sentieo.

Management also pointed to its efforts to educate patients, caregivers and the physician community, including the launch of websites CannabinoidClinical.com and TakeOnEpilepsy.com, but it cautioned that “it may take time for physicians to learn how to use the new medicine and adopt it in their clinics and for payers to provide reimbursement coverage.” Investors have seemingly cooled to the GW Pharma story since the drug was approved in late June. In fact, the stock price peaked prior to the formal approval at an all-time high of 164.76 and closed today at 129.00, down 21.7%, though it is still 33.8% above the 52-week low set in September: 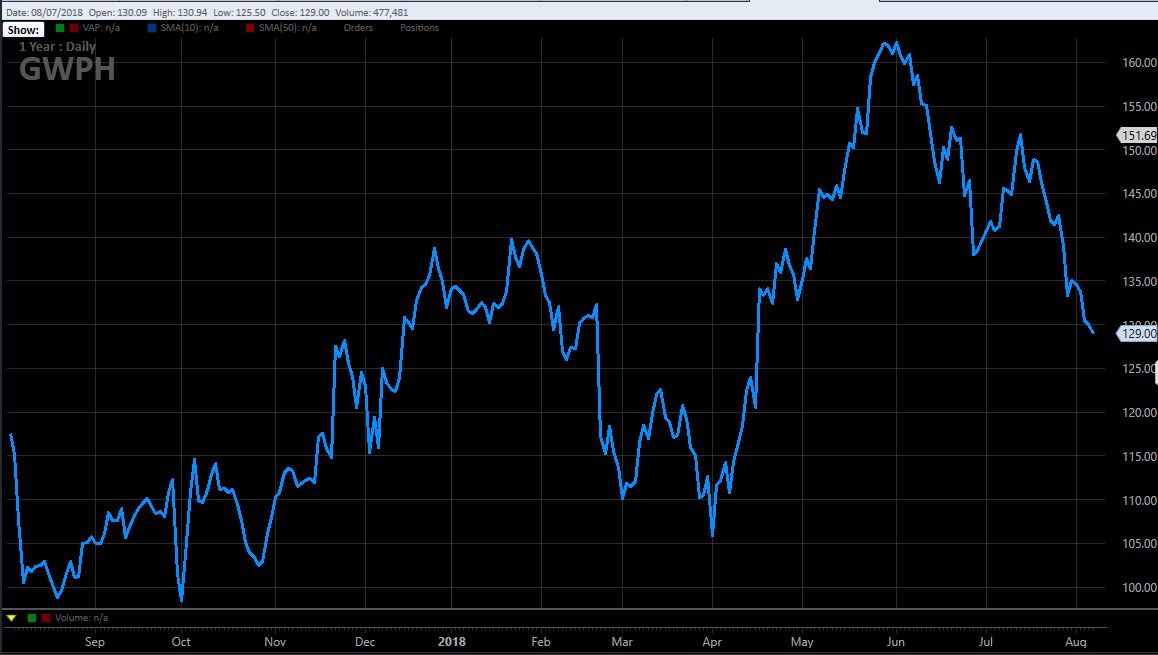 One other issue that appears to be of concern to investors is the actual scheduling of Epidiolex. The company continues to expect the DEA to formally schedule the drug as IV or V by late September, with the agency taking the full 90 days allowed. Finally, investors should be aware that going forward, beginning with the annual 10-K report, GW Pharma will be filing with the SEC and its accounting will be in in accordance with U.S. Generally Accepted Accounting Principles and in U.S. dollars.