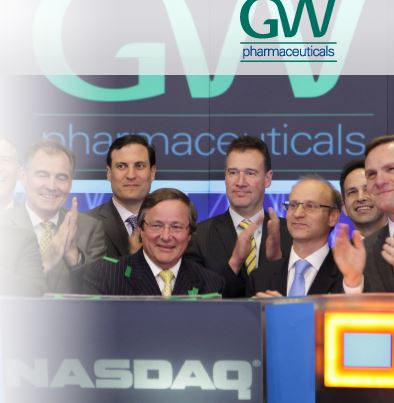 Most investors understand the importance of listening to quarterly conference calls, as companies will often reveal important information in either the prepared remarks or the Q&A that follows that isn’t conveyed in the press release. Such was the case with GW Pharma (NASDAQ:GWPH) (LON:GWP), which reported its Q2 today.

Today’s press release neglected to mention the timing of the New Drug Application (NDA) filing with the FDA for its epilepsy drug, Epidiolex.  The timing is crucial because the drug can’t be marketed until it receives FDA approval, which can take more than a year from the time the NDA is filed, though for GWPH, which has Fast Track Designation, a likely scenario would be about 10 months from submission to being able to market Epidiolex. When it reported Q1, the press release was very clear regarding the timing, with the company suggesting it would happen in Q4:

After the March 14th news regarding the Phase 3 Dravet syndrome trial results, the company suggested that it would “request a pre-NDA meeting with the FDA to discuss our proposed regulatory submission”, and some investors concluded that the company might actually accelerate the filing.  The company later posted an investor presentation to its website that still indicated a Q4 NDA submission (see page 3). In the conference call from Q1, the company had suggested that if the results of the trial were very strong, it would consider filing on the basis of just the first trial rather than waiting to complete several others.

The language in the press release today regarding timing of the NDA filing was quite different from three months ago, not really addressing it at all:

As Justin mentioned, we have requested a pre-NDA meeting with the FDA to discuss the proposed Dravet syndrome NDA submission, and we expect this meeting to take place in the summer. The outcome of this meeting, together with results of our two Lennox-Gastaut syndrome trials, will provide greater clarity of the optimal NDA submission strategy.

In our view, the submission is most likely to take place during the first half of 2017, and subject to the outcome of the LGS trials, would include data supporting the approval of Epidiolex in both indications. The work on compiling this NDA has now commenced.

The company, then, quietly pushed out the NDA filing by up to six months, which means Epidiolex, if it is ultimately approved, will not likely be on the market until very late 2017 or even early 2018. Surprisingly, the analysts on the call did not question the company on this pushout. Unfortunately, sales estimates will likely be adjusted lower for the company for Fiscal 2017 ending 9/30/17, as some analysts appear to include Epidiolex sales, which now don’t appear likely to materialize.

An additional negative detail revealed on the conference call but not in the press release was that the 2nd Dravet Phase 3 trial, which the press release described only as “ongoing”, is still enrolling.  CMO Wright said:

We have elected to keep the second Dravet syndrome trial open for recruitment until after the pre-NDA meeting. This allows us to retain some flexibility through our pre-NDA discussions.

This delay is likely at least partially responsible for the pushout of the NDA filing, as the company will want to include the results from this trial in the submission. The 2nd Dravet syndrome trial lasts 18 weeks (4 week baseline observation, 2 week titration, 12 week analysis).  If this trial begins after the meeting with the FDA, which is expected in late June but hasn’t yet been scheduled, it might not read out until early 2017. The company had previously suggested the results from this trial would be available in the second half of this year.

GWPH had sold off going into the report in a market that has seen a sharp pullback over the past two weeks for biotech stocks.  The stock closed well off the lows of the day near 74 but down 0.75% from the prior day. 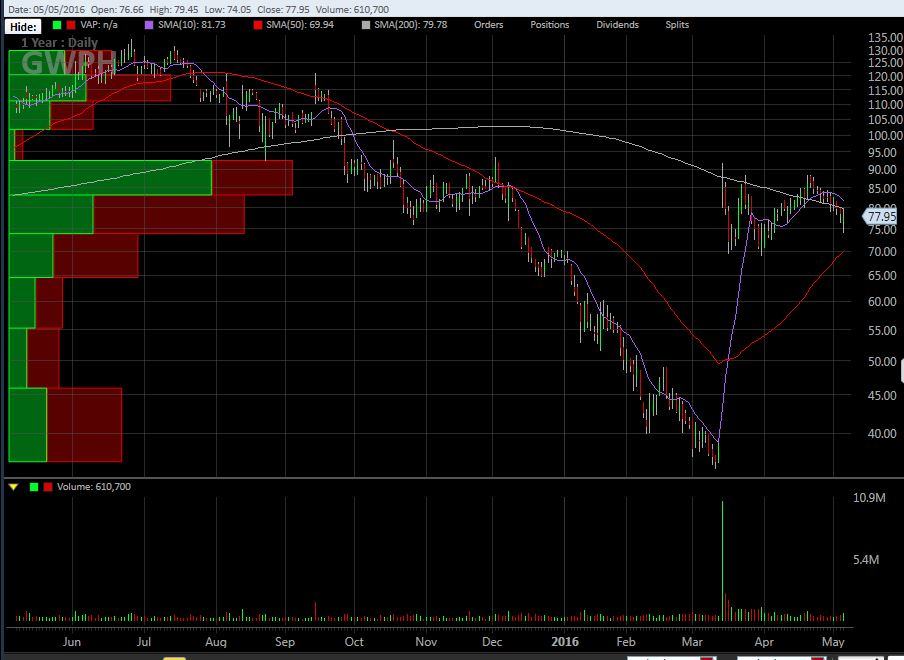 While GWPH’s Epidiolex has substantial long-term potential, the delay in filing the NDA, which hasn’t been reported in financial media, could pressure the stock in the near-term as analysts pull revenue for FY17 out of their models.