GW Pharma is trading near $74 following the issuance of a press release detailing the first of four late-stage clinical trials for its epilepsy drug, Epidiolex. The stock has been under severe pressure over the past few months due to weakness in the overall biotech market as well as fear that the first trial would not achieve statistical significance.  The company reported “high statistical significance” in reducing convulsive seizures. 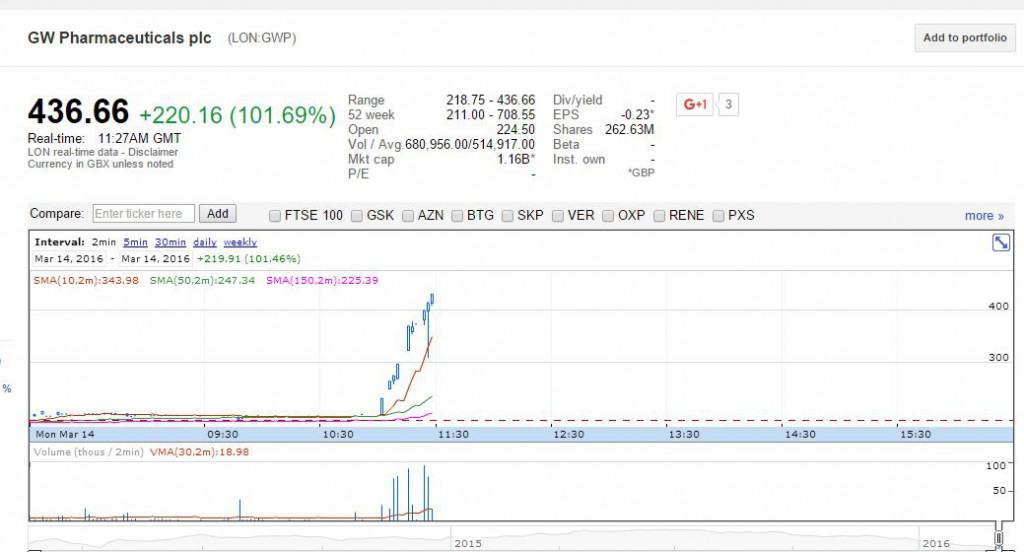 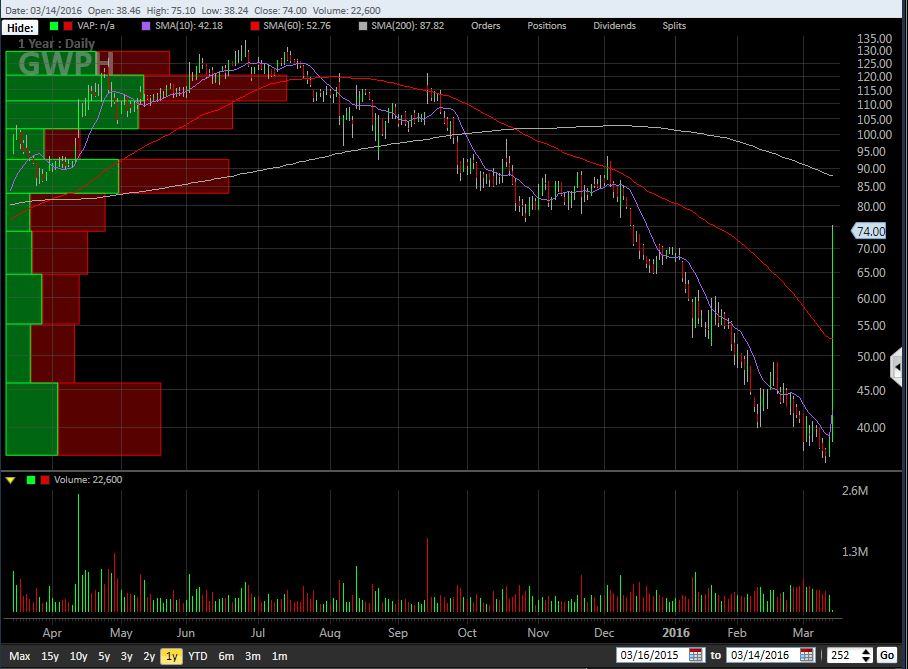 LONDON, March 14, 2016 (GLOBE NEWSWIRE) — GW Pharmaceuticals plc (Nasdaq:GWPH) (AIM:GWP) (“GW,” “the Company” or “the Group”), a biopharmaceutical company focused on discovering, developing and commercializing novel therapeutics from its proprietary cannabinoid product platform, announces the positive results of the first pivotal Phase 3 study of its investigational medicine Epidiolex® (cannabidiol or CBD) for the treatment of Dravet syndrome. In this study, Epidiolex achieved the primary endpoint of a significant reduction in convulsive seizures assessed over the entire treatment period compared with placebo (p=0.01). Epidiolex has both Orphan Drug Designation and Fast Track Designation from the U.S. Food and Drug Administration (FDA) in the treatment of Dravet syndrome, a rare and debilitating type of epilepsy for which there are currently no treatments approved in the U.S.

“The results of this Epidiolex pivotal trial are important and exciting as they represent the first placebo-controlled evidence to support the safety and efficacy of pharmaceutical cannabidiol in children with Dravet syndrome, one of the most severe and difficult-to-treat types of epilepsy,” said Orrin Devinsky, M.D., of New York University Langone Medical Center’s Comprehensive Epilepsy Center. “These data demonstrate that Epidiolex delivers clinically important reductions in seizure frequency together with an acceptable safety and tolerability profile, providing the epilepsy community with the prospect of an appropriately standardized and tested pharmaceutical formulation of cannabidiol being made available by prescription in the future.”

“The positive outcome of this Phase 3 trial is a significant milestone in the development of Epidiolex as a potential new treatment for patients suffering from Dravet syndrome. We are excited about the potential for Epidiolex to become the first FDA approved treatment option specifically for Dravet syndrome patients and their families,” stated Justin Gover, GW’s Chief Executive Officer. “In light of this positive data, we will now request a pre-NDA meeting with the FDA to discuss our proposed regulatory submission. We also look forward with excitement to the upcoming results from the two Phase 3 trials in Lennox-Gastaut syndrome and the second pivotal trial in Dravet syndrome.”

“Dravet syndrome is one of the most catastrophic types of epilepsy in children and safe and effective treatments are desperately needed. We are thrilled to learn of these positive results, which bring much needed hope to the children and families who have been living with these debilitating seizures,” said Mary Anne Meskis, Executive Director of the Dravet Syndrome Foundation.

The Phase 3 study randomized 120 patients into two arms, Epidiolex 20mg/kg/day (n=61) and placebo (n=59). Epidiolex or placebo was added to current anti-epileptic drug (AED) treatment regimens. On average, patients were taking approximately 3 AEDs, having previously tried and failed an average of more than 4 other AEDs. The average age of trial participants was 10 years and 30 percent of patients were less than 6 years of age. The median baseline convulsive seizure frequency per month was 13.

The primary efficacy endpoint was a comparison between Epidiolex and placebo measuring the percentage change in the monthly frequency of convulsive seizures during the 14-week treatment period compared with the 4-week baseline observation period. In this study, patients taking Epidiolex achieved a median reduction in monthly convulsive seizures of 39 percent compared with a reduction on placebo of 13 percent, which was highly statistically significant (p=0.01). A series of sensitivity analyses of the primary endpoint confirmed the robustness of this result. The difference between Epidiolex and placebo emerged during the first month of treatment and was sustained during the entire treatment period.

Further data will be presented in future publications and medical meetings.

In addition to this first Phase 3 trial, GW is conducting a second Phase 3 trial in Dravet syndrome which is recruiting 150 patients.

In addition to the Dravet syndrome trials, GW is conducting the largest global pivotal clinical trial program to date in Lennox-Gastaut syndrome, another rare and severe form of epilepsy. The first Phase 3 trial is a placebo-controlled trial of Epidiolex (at a dose of 20 mg/kg) over a 14-week treatment period and has randomized 171 patients. This trial is expected to report top-line results in the second quarter of 2016. The second placebo-controlled trial has randomized a total of 225 patients and is expected to report top-line results mid-2016. The primary measure of efficacy in these two trials will be the comparison between Epidiolex and placebo in the percentage change in number of monthly drop seizures during the 14-week treatment period compared with the 4-week baseline observation period.

Based on the findings of the physician-led expanded access program, GW continues to identify additional development targets for Epidiolex within the field of childhood-onset epilepsy disorders. A Phase 3 trial in a third epilepsy indication, Tuberous Sclerosis Complex, is due to commence imminently and clinical development in a fourth indication is expected to commence in the second half of 2016.

Dravet syndrome is a severe infantile-onset and highly treatment-resistant epileptic syndrome frequently associated with a genetic mutation in sodium channels. Onset of Dravet syndrome occurs during the first year of life in previously healthy and developmentally normal infants. Initial seizures are often temperature related, severe, and long-lasting. Over time, people with Dravet syndrome can develop multiple types of seizures, including tonic-clonic, myoclonic, and atypical absences and are prone to bouts of prolonged seizures called status epilepticus, which can be life threatening. Risk of premature death including SUDEP (sudden expected death in epilepsy) is elevated in people with Dravet syndrome. Additionally, the majority will develop moderate to severe intellectual and development disabilities and require lifelong supervision and care. There are currently no FDA-approved treatments and nearly all patients continue to have uncontrolled seizures and other medical needs throughout their lifetime.

Epidiolex, GW’s lead cannabinoid product candidate, is a liquid formulation of pure plant-derived CBD, which is in development for the treatment of a number of rare childhood-onset epilepsy disorders. GW has conducted extensive pre-clinical research of CBD in epilepsy since 2007. This research has shown that CBD has significant anti-epileptiform and anticonvulsant activity using a variety of in vitro and in vivo models and has the ability to treat seizures in acute animal models of epilepsy with significantly fewer side effects than existing anti-epileptic drugs. To date, GW has received Orphan Drug Designation from the FDA for Epidiolex in the treatment of both Dravet syndrome and Lennox-Gastaut syndrome. Additionally, GW has received Fast Track Designation from the FDA and Orphan Designation from the European Medicines Agency for Epidiolex for the treatment of Dravet syndrome. GW is currently evaluating additional clinical development programs in other orphan seizure disorders.

About GW Pharmaceuticals plc
Founded in 1998, GW is a biopharmaceutical company focused on discovering, developing and commercializing novel therapeutics from its proprietary cannabinoid product platform in a broad range of disease areas. GW commercialized the world’s first plant-derived cannabinoid prescription drug, Sativex®, which is approved for the treatment of spasticity due to multiple sclerosis in 28 countries outside the United States. GW is advancing an orphan drug program in the field of childhood epilepsy with a focus on Epidiolex® (cannabidiol), which is in Phase 3 clinical development for the treatment of Dravet syndrome and Lennox-Gastaut syndrome and which is also expected to enter Phase 3 clinical trials in the treatment of Tuberous Sclerosis Complex. GW has a deep pipeline of additional cannabinoid product candidates which includes compounds in Phase 1 and 2 trials for glioma, type 2 diabetes, schizophrenia and epilepsy. For further information, please visit www.gwpharm.com.