Stocks, in general, are experiencing their worst January since 2008, and this is weighing heavily on the cannabis sector as measured by the New Cannabis Ventures Global Cannabis Stock Index, which is down over 18% to begin the year. Cannabis stocks are generally speculative, and speculative assets have been hit the hardest over the past four weeks: 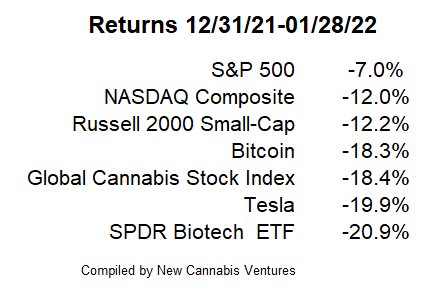 For cannabis stocks, 2022 is looking like 2020 four weeks into the year, with a prior downtrend extending. In Q4, the Global Cannabis Stock Index dropped 27%, and it has declined 18.4% in January thus far. Compared to the peak last February, the market has now dropped 69.9%. A decline of 21% in Q4 of 2019, related to the vaping crisis, was followed by a 5.2% decline in January 2020. When the market hit bottom in March of 2020, it had dropped 83.9% from its peak in March 2019. While this decline is somewhat less in magnitude, it has been extreme, with a similar time-frame. It’s unrealistic to expect cannabis stocks won’t struggle further if the overall market continues to sell off aggressively, but we believe that some cannabis companies will fare better than others, if so.

Investors Will Focus on Financial Strength

When investors are optimistic, they focus on growth potential. While financial strength should always be a concern, it becomes more important when stock prices are falling. The question is a simple one: Can the company weather the storm?

The cannabis sector has many different types of companies, and even similar companies can have very different financial profiles. In the ancillary space, where capital intensity is generally low, we have seen some of the worst performance from companies that have no net debt. For example, GrowGeneration has declined 44%, while WM Technology has dropped 25%. These companies should be able to weather the storm, but right now investors are concerned about near-term financials. We also think that ancillary companies that trade on the NASDAQ are more sensitive to the changes in the overall market, as they are held by funds and other institutional investors.

Direct cannabis companies have higher capital intensity, though the capital is related more to expansion projects rather than maintaining their operations. Investors should pay close attention to the amount of debt cannabis operators have taken on, when it is due, how it compares to its cash position and what the company’s operating cash flow and capital expenditures are expected to be. Some companies have less debt, more cash and better cash flow than others, and we expect that investors will favor these companies. So far this hasn’t necessarily been the way returns have played out so far in 2022 in our view. For example, GTI, which is the strongest large cannabis company financially, is down 23.1%.

Falling stock prices likely shut the door to equity raises. This week, Agrify sold a substantial amount of stock, and its price fell 18%. Selling stock in a rapidly declining market is not likely to be well received. We have seen in recent months several companies access debt at historically low interest rates for the sector, including Trulieve borrowing an additional $75 million just this week at 8%. Companies that have a proven ability to access non-equity capital, whether through debt or sale-leaseback, are likely to find favor over those that can’t do so. Investors should be aware of which companies have proven their ability to access capital.

M&A May Begin to Slow

If prices continue to fall, we expect mergers and acquisition activity could dry up, at least initially. We have long suggested that the largest source of merger activity will be public companies buying private companies rather than public ones, and this has generally been the case. Declining stock prices make the acquirers reluctant to use their stock to make a purchase, as they are seen as more dilutive to existing shareholders. This may explain the recent Curaleaf deal in Arizona, with the company using cash and debt to buy Bloom Dispensaries.

Over time, private operators looking to sell may have to settle for a lower price, but the steep decline in public equity prices can lead to a period of reluctance to sell for a lower amount. Looking out, if equity prices remain depressed, stronger cannabis companies will be able to pick up acquisitions much cheaper, as many private companies, at least the ones that aren’t profitable, will struggle financially. The short-term slowdown in M&A could weigh on the ability of some companies to grow inorganically in 2022, especially those that are in weaker financial condition.

2022 has started off horribly for investors within and beyond the cannabis sector. While we are hopeful that the steep sell-off proves to be the typical overall market correction, we are thinking about how a prolonged market correction may impact the sector. In 2020, the market looked dire entering the year and downright dismal as the pandemic hit, yet stocks provided very strong returns over the balance of the year. For now, we suggest that investors pay attention to the financial strength of the companies in which they invest as well as their access to capital, as some companies are better positioned to weather the storm than others.

Learn how to differentiate between the stronger and weaker  cannabis companies with a subscription to Alan Brochstein’s 420 Investor. Understand complex financials, deal terms, legislation news and important catalysts by using the longest running cannabis stock due diligence platform trusted by investors for over 8 years.