With voters weighing in on an unprecedented number of cannabis legalization ballot initiatives in just 40 days, media attention is starting to ramp up.  This year, Arizona, California, Maine, Massachusetts and Nevada voters will be deciding whether to tax and regulate cannabis for adult use, while voters in other states will consider establishing or expanding medical cannabis programs. While it is still quite early, many of the polls are predicting victories in the five states looking to legalize for adult use.

As I shared recently, cannabis stocks are heating up. Through September 28th, the Cannabis Stock Index was up 26.4% month-to-date. It’s quite evident that new investors (or traders) are entering the market, looking to capitalize on the macro trend of state-by-state adoption of cannabis legalization, and I have seen several former subscribers to 420 Investor return, seeking to better understand the fundamental and technical factors for the sector and the stocks within it. I have also observed a massive wave of promotion that is likely to intensify.  Not only are publicly-traded cannabis-related companies issuing press releases at an accelerated cadence, but also newsletters are hawking their services with promises of “once-in-a-lifetime” opportunities to cash in.

Can investors make money by backing companies in the cannabis industry? While the answer is yes, it’s important to understand that one can lose a lot as well. The set-up for this election season, at least in the public markets, which are easier to measure than the private markets, is very similar to late 2013, right before Colorado legalized.  This was an entirely different set of circumstances that won’t repeat to the same magnitude but is likely to play out somewhat similarly in my opinion.  For those that invested in the average cannabis stock two months before Colorado’s legal retail cannabis stores opened on January 1, 2014 and held through the peak in mid-March, the gains were extraordinary at +800%: 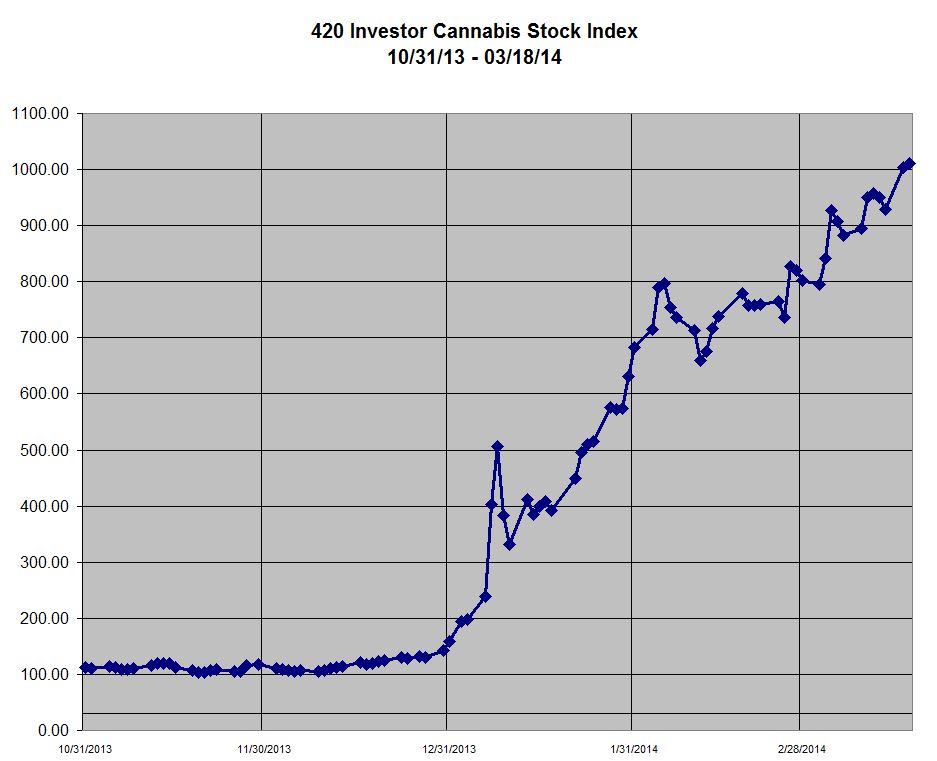 This huge move took place as traders flooded into the market looking to make a quick buck.  There were fewer than two dozen stocks that they could buy at the time, so it was pretty crowded.  The momentum fed on itself, but, when the market topped, it ended very poorly: 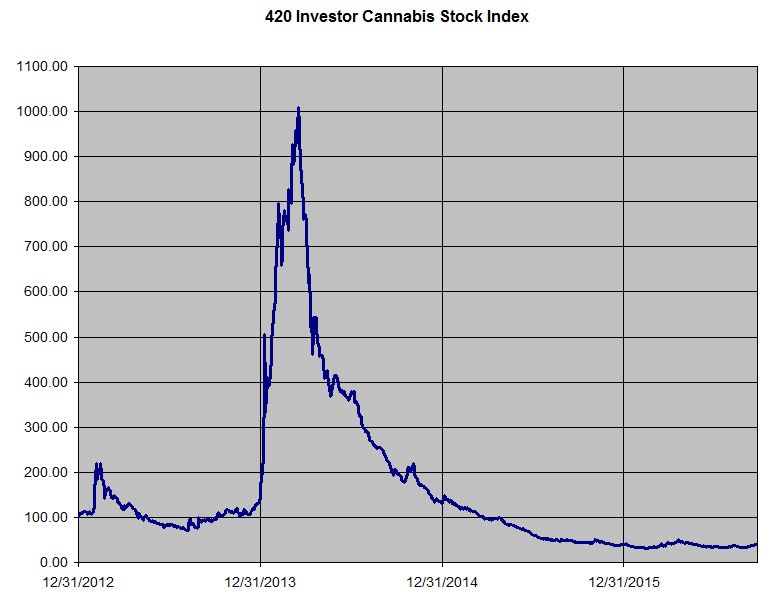 There is no doubt that there is an exciting new industry, but investing in it is not easy. There are very few intermediaries helping to connect investors and cannabis businesses, so the market is highly fragmented. There are also few trusted sources of information, so investors are often on their own trying to navigate a complex industry filled with startups. Finally, it’s important to remember that the industry is federally illegal, which adds risks to both the operators and the investors.

If one is going to invest in the cannabis industry, there are two options: Public companies or private ones.  To invest in a private company, typically one has to be accredited, meaning having an income above $200K ($300K for a family) or assets above $1mm. Anyone can invest in a publicly-traded stock. 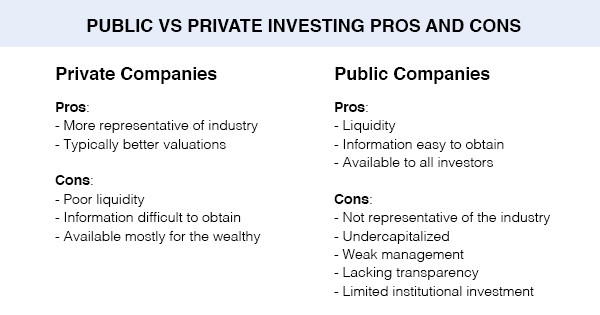 The public markets have one big advantage in general: Liquidity.  One can buy and quickly sell if one changes one’s mind or wants to take a quick gain (or loss). There also is often more information available on publicly-traded companies. The main challenge for investing in publicly-traded cannabis stocks is that they don’t really represent the industry.  Most, not all, of the almost 400 companies that I track are not likely to ever be successful, and many are outright frauds.  The vast majority of the public stocks trade on the OTC and not the NYSE or NASDAQ, and this is problematic because it excludes institutional investors.

Private companies have poor liquidity. When one invests, it can take years to exit. Typically a successful company will be acquired or go public, allowing the investor to cash out, but this can take quite some time.  If the company is unable to hit its targets and runs out of money, then one’s stake can be diluted.  While the lack of liquidity is a challenge, private companies can offer much better valuations.  Additionally, there is some institutional involvement in private companies. While often the institutional funds themselves are unable to invest, the people running them sometimes do.  There are also some funds that specialize in investing in the cannabis industry.

If one is going to invest in publicly-traded companies, then one is likely on one’s own for the most part, as there are no mutual funds or ETFs available yet.  Investing in individual stocks requires that one open a brokerage account, and, believe it or not, some brokers won’t allow cannabis investments or restrict their customers. Thus, it’s important to find a broker that will allow one to transact. Another consideration is that Canada has rapidly become one of the best opportunities in the cannabis sector, so having the ability to trade in Canada is an important consideration. If one is investing in cannabis stocks, a resource to incorporate would be OTCMarkets.com, as most of the stocks trade on the OTC. Seeking Alpha is one of a handful of financial sites that has content on cannabis stocks occasionally. Some other free resources would include The Money Show, which hosts virtual conferences several times a year. The Cannabis Investor Webcast, which takes place monthly and includes presentations by several public and private companies, is another option. There are not a lot of resources for individual investors who need assistance. 420 Investor, which I founded three years ago, is the most comprehensive due diligence platform, with a community of engaged members.  The service includes news alerts, analysis, model portfolios, ten videos per week, a forum and a weekly chat.

For those who want to invest in private companies, there are a few funds, though with limited operating histories. One such firm is Poseidon Asset Management, headed by brother-and-sister Morgan and Emily Paxhia. Another resource is The Arcview Group, which offers not only an angel investing group but also market research. New Cannabis Ventures profiles many of the leading private companies in the industry, including some of which are our clients.

Whether one invests in public or private companies, it is essential to follow the industry closely. New Cannabis Ventures aims to help investors stay on top of key trends and highlights leading companies, both public and private, as well as influential investors in the industry.

A really interesting opportunity next month takes place in San Francisco, the New West Summit, which focuses on technology, media and investing. Readers of New Cannabis Ventures can save 50% on admission for a limited time.

I have been following the cannabis industry since early 2013 and continue to do so because it does represent a great investment opportunity despite a lot of challenges. While there will be a lot of hype in front of the elections and perhaps beyond, there is no reason to rush into any investment. It is more important to understand the industry and to gain the ability to pick the management teams and opportunities that one thinks will succeed. If you have any questions, feel free to reach out.