With just a week to go, it’s been a September to remember for cannabis stock traders, with the Cannabis Stock Index up 22.1% month-to-date: 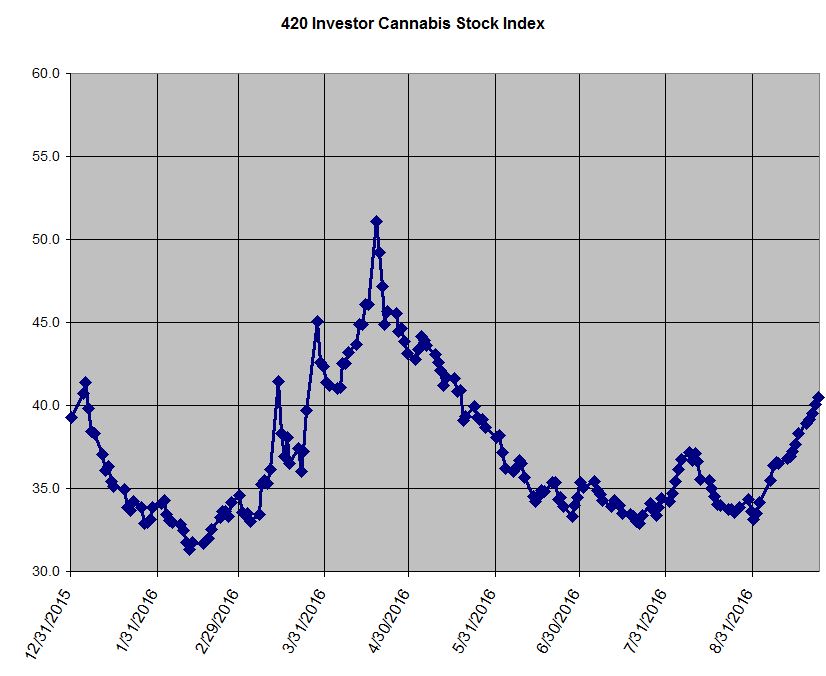 Volume has picked up as well, as traders appear to be jumping back into the sector in advance of five legalization votes on November 8th and several medical cannabis votes as well.  I discussed this likelihood in the September edition of the monthly 420 Investor Newsletter, sharing three reasons why my subscribers should be prepared for an election season rally:

First, the overall market isn’t declining. While it’s down YTD, the lows from February are still intact. Second, the big run mid-year is likely to encourage speculators betting on an election trade. Finally, and most importantly, we have never seen such ballot activity. As a reminder, there are legalization votes in AZ, CA, MA, ME and NV, with MMJ votes in several other states. The number is impressive, but also the size (CA) and the novelty of two East Coast states will draw a lot of media attention.

2016 has been a great year for trading the cannabis sector, with a big spike in GW Pharma (NASDAQ: GWPH) (AIM: GWP) in March following the release of the results of its first Phase 3 clinical trial for Epidiolex setting off interest in many other stocks, even if not warranted.  At its peak in April, the market was up 30% YTD before testing the lows from early in the year. After peaking in March of 2014, the index had lost almost 97% of its value 23 months later. Even with the rally from the lows, the market is currently down 96%!

420 Investor offers two different model portfolios, the trading-oriented “Flying High”, which is up 84.9% year-to-date, and the longer-term oriented “420 Opportunity”, which has gained 78.6%. Flying High currently has long six different positions, three of which I will share today and that I think are well positioned for gains going into the elections, including American Cannabis Company (OTC: AMMJ), CV Sciences (OTC: CVSI) and Kush Bottles (OTC: KSHB).

AMMJ began trading in 2014 after the peak of the market.  It has about 47mm shares outstanding and only a small amount of convertible debt (with a floor on the conversion price). The market-cap, then, at about $8mm, is relatively low. The company offers consulting services to companies applying for or operating cultivation licenses, and it also sells products, some of which are proprietary, to cultivators and dispensaries. In the first half of the year, the company produced revenues of $984K, representing growth of 8% and producing an operating loss of $88K, down substantially from the $325K operating loss in the first half of 2015. I added a position at $0.151 this week. 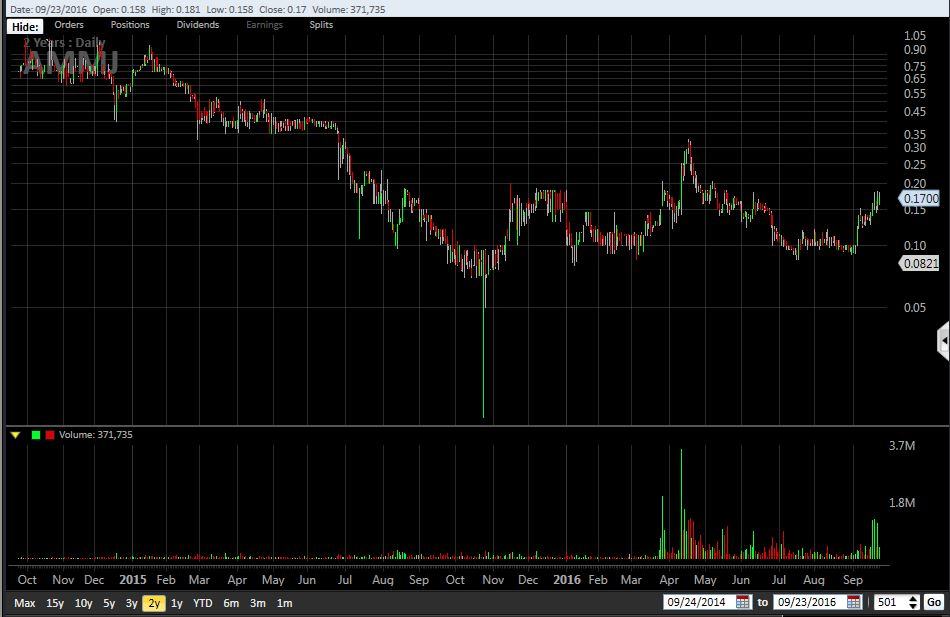 The stock ran earlier this year on very heavy volume from below $0.10 to about $0.33 and then based higher during the summer. I expect that traders will appreciate the optics of a stock that is down substantially over the past two years but in the rally mode (higher lows, higher highs), the clean balance sheet and the decent liquidity.  While I don’t expect to hold the stock in the model portfolio without taking profits along the way, I anticipate that the stock could reach $0.35, perhaps a bit higher, during the election season.

CVSI, which was formerly CannaVest trading under the symbol CANV until a change earlier this year, is another stock with a long trading history since its spinout from Medical Marijuana, Inc. (OTC: MJNA) in 2013. The company is known best for selling products with CBD derived from industrial hemp, but it has entered the drug discovery and development business following an acquisition earlier this year and is working to create a chewing gum product that will deliver CBD and nicotine.  Further, the company has refined its business model towards finished goods and away from bulk CBD.  With about 52mm shares outstanding, the market cap is slightly above $13mm.  The company produced revenue of $4.9mm in the first half of the year, a slight decline that reflects the transition from bulk products with lower margins towards finished goods that has resulted in a gross margin improvement from 56% to 67%. I added shares at $0.253 this week. 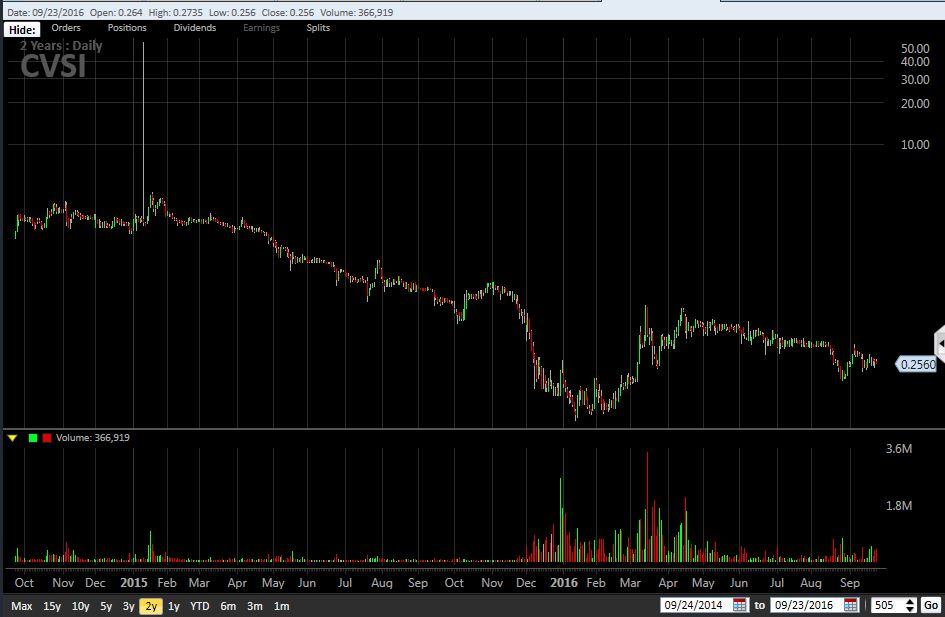 The stock was crushed in late 2015 as the company endured conversions of notes with a variable conversion price, falling by 90% to an all-time low of $0.10 early in the year. When the company was able to refinance the remaining amount outstanding of the convertible note, it resulted in a rally to $0.66.  Like AMMJ, this one has a relatively low market cap for the sector, a long trading history, good liquidity and the appearance of a downtrodden stock that has put in a good bottom.  From a trading perspective, I am expecting the stock to recover about half the losses from $0.66 to the recent bounce off of support at $0.20, which would put it at $0.43. Fundamentally, this price would represent a market cap equal to just 2.2X sales.

KSHB is one of the highest quality names in the sector outside of the Canadian licensed producers, having recently gone public without doing a reverse-merger and supported by solid fundamentals. The company has net cash on the balance sheet, sales that have been growing strongly and should be reported at about $8mm for the year ending 8/31/16, and no convertible debt. The company offers packaging products and services in Colorado, California and the Pacific Northwest and is poised to benefit from the growth in legal, regulated markets.  Cowen and Company recently initiated coverage, with an “Outpeform” rating and a target of $3, representing the first time a major Wall Street firm has provided research on an OTC name in the cannabis sector. With about 49mm shares, the stock is not cheap (market cap of $113mm).  I had established a position at $1.78 when I saw the news regarding Cowen and Company’s research coverage, and I added to it at $2.11 this week. 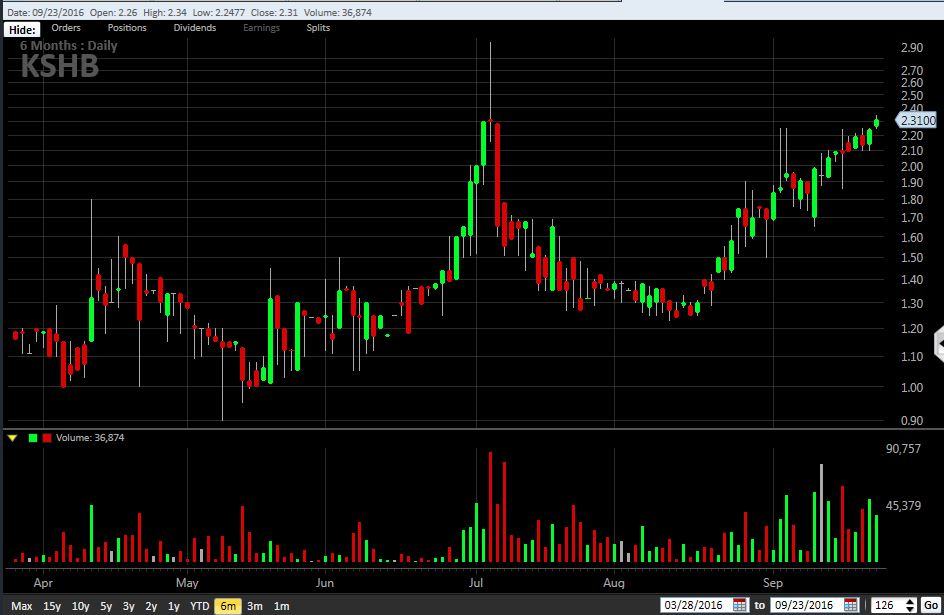 The stock has a much briefer trading history, having begun trading in January. Still, trading volume has been strong since late June.  The close on Friday took out the early July closing highs and the recent resistance at $2.25. The float is relatively low, which could benefit traders looking to ride what appears to be a breakout. The $3 Cowen and Company target is just above the intraday peak in early July and would represent a gain from here of almost 30%.

Investors should continue to be wary of the vast majority of the publicly-traded cannabis stocks, and even the handful of legitimate ones will likely struggle to maintain the gains after this trade ends. Even with a great start to September, 5 of the 28 stocks in the Cannabis Stock Index have endured double-digit percentage declines so far, with 2 down 40% or more. So, those looking to take advantage of this trading theme need to be selective.

This is a great trade in my view, but just a trade. For those with a longer-term perspective, I continue to like the publicly-traded Canadian licensed producers, though they have rallied dramatically since I shared my positive view here just three months ago (3 Reasons Why Cannabis Stock Investors Should Focus Now on Canada).  For those that want to learn more about that part of the sector, we have created a resource page to help with due diligence.

Will the cannabis stocks continue to rally? Take our survey!

Disclosure: I have no positions in any stocks mentioned (or in any cannabis stocks), but I include AMMJ, CVSI and KSHB in one or more model portfolios at 420 Investor.