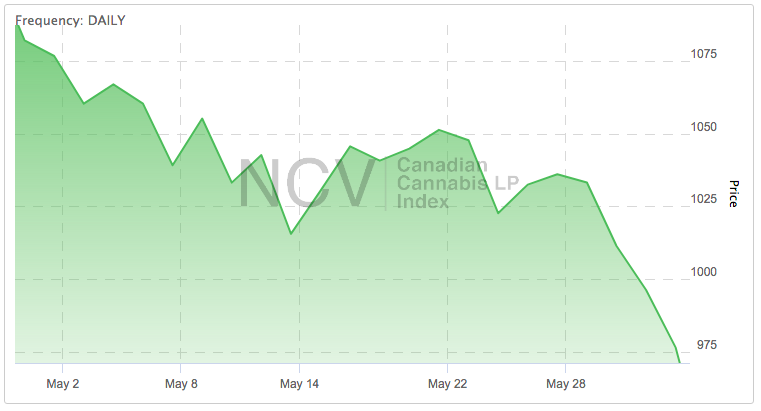 The index remains substantially below the all-time closing high of 1289.57 on October 15th, just ahead of Canadian legalization. It has increased 54.5% since bottoming on December 21st and is up 38.6% year-to-date: 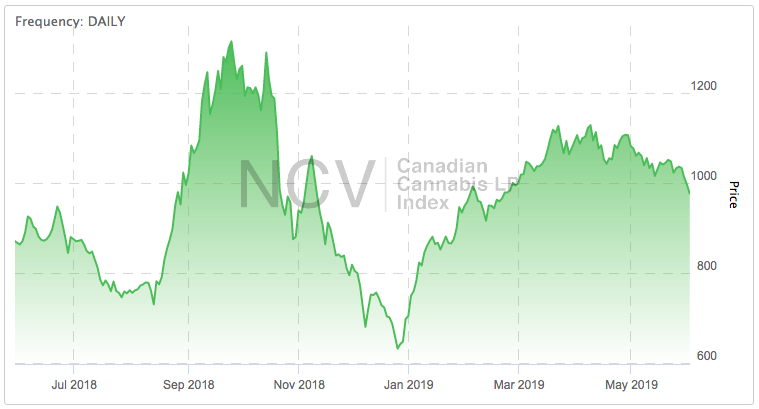 Tier 1, which included the LPs that are generating sales of at least C$10 million per quarter (in 2018, we used C$4 million as the hurdle), declined the most among the three tiers in May, decreasing 12.3% for a year-to-date gain of 51.5% after declining 7.7% in 2018. This group included Aphria (TSX: APHA) (NYSE: APHA), Aurora Cannabis (TSX: ACB) (NYSE: ACB), CannTrust (TSX: TRST) (OTC: CNTTF), Canopy Growth (TSX: WEED) (NYSE: CGC), HEXO Corp (TSX: HEXO) (NYSE American: HEXO), MediPharm Labs (TSXV: LABS) (OTC: MEDIF)  and Organigram (TSXV: OGI) (OTC: OGRMF) . With the exceptions of Medifarm Labs, which increased 2.5%, and Organigram, which declined 1.5%, the balance of the group endured double-digit declines, with CannTrust, down 22%, performing the worst after pricing a large equity offering.

Tier 2, which included the LPs that generate quarterly sales between C$2.5 million and C$10 million, fell 9.0%, leaving it up 56.4% to begin 2019 after declining 35.0% in 2018.  This group included Cronos Group (TSX: CRON) (NASDAQ: CRON),  Delta 9 (TSXV: NINE) (OTC: VNRDF), Flowr Corp (TSXV: FLWR) (OTC: FLWPF), Newstrike Brands (for most of the month before its acquisition by HEXO Corp),  Supreme Cannabis (TSX: FIRE) (OTC: SPRWF) and TerrAscend (CSE: TER) (OTC: TRSSF). Flowr was the only positive performer among the group, aided, perhaps, by its announcement that it is moving to the NASDAQ from the OTC.

Tier 3, which included the 39 LPs that generate quarterly sales less than C$2.5 million, declined 9.4%, leaving its year-to-date gain at 34.4% after declining 26.4% in 2018. The top 5 performers for the entire sector were all members of Tier 3 during May as were the 6 worst performers.

The returns for the overall sector varied greatly, with four names gaining more than 10%, while ten declined by more than 20%: 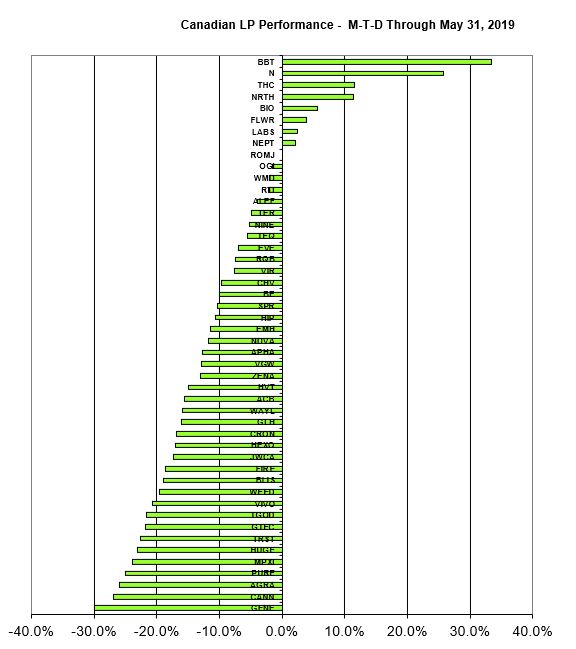 For June, the overall index increases to 50 constituents, with the removal of Newstrike Brands due to its acquisition and the addition of Auxly (TSXV: XLY) (OTC: CBWTF), Canadabis (TSXV: CANB) and MJardin Group (CSE: MJAR) (OTC: MJARF). Each of these are in Tier 3. Additionally, Flowr moved down from Tier 2 to Tier 3, while VIVO Cannabis (TSXV: VIVO) (OTC: VVCIF) and WeedMD (TSXV: WMD) (OTC: WDDMF) moved from Tier 3 to Tier 2. Readers should be aware that Tilray (NASDAQ: TLRY), with no Canadian listing, is not eligible for inclusion in the index, which is denominated in Canadian dollars. Note that the cut-off date for making changes to the index was 5/29.