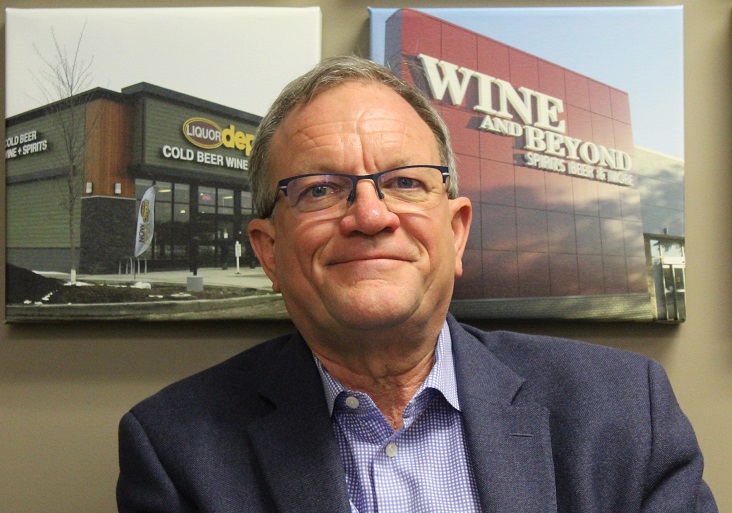 Alcanna has been in the private liquor retail business for years, and now the company is making strides in the cannabis business through its Nova Cannabis brand. Vice Chair and CEO James Burns spoke with New Cannabis Ventures about his company’s approach to controlled substances retail, the major growth opportunity in Ontario and how cannabis will be a big part of the company’s strategy going forward.

Burns has experience in capital markets, as well as multi-unit retail through the quick-service restaurant business. At one point in his career, he and a partner owned the second-largest KFC franchise in the world with approximately 400 KFCs, 300 Pizza Huts, and 80 Taco Bells. The importance of location is essential in retail, regardless of what is being sold, and Burns saw an opportunity to use his expertise in the controlled substances space.

Alcanna is run by a partnership of four. Burns prefers a partnership model, rather than a hierarchal approach. Along with Burns, the company is led by Executive Vice President and CFO David Gordey; Senior Vice President of Human Resources and Managing Director of Cannabis Marcie Kiziak; and President and COO Paul Reid. Tank Vander and Don Bobey run Alcanna’s majority-owned subsidiary Canadian Liquor Retail Alliance as CEO and President, respectively.

Two years ago, Alcanna’s business underwent a significant transformation. A proxy solicitation contest resulted in a new board. The previous board wanted to expand the company into the U.S., while many of the company’s shareholders disagreed on the prudence of the strategy. With the new board, Alcanna pivoted its strategy. The company sold its American businesses (save for its presence in Alaska) and focused on improving its fleet of stores in Canada, including its highly profitable Wine and Beyond stores. The company needed capital to do this and to improve its balance sheet.

In 2018, Aurora Cannabis bought 25 percent of the company’s shares for $138 million, which gave Alcanna a strong balance sheet and the fuel it needed to restructure its liquor retail business and enter the cannabis industry.

Alcanna’s expansion into cannabis was a natural move. Years of experience working in controlled substance retail gives the company an edge compared to startups that have no knowledge of navigating a stringent regulatory environment. Alcanna has longstanding relationships with regulators and landlords, according to Burns. Finding real estate in the cannabis space can be difficult, but Alcanna’s established relationships with landlords have helped it secure prime locations for its Nova Cannabis locations.

While Alcanna is getting established in the cannabis space, it has to contend with the challenges of limited licensing and inventory. The company earned five of the first 17 licenses in Alberta, but the province soon shut down licensing because cannabis supply ran out, according to Burns. During the first few months of operation, customers would line up on the day of delivery and the supply would be gone within the same day. As a result, the company slowed the build-out of the rest of its stores to an extent, but it seems supply is less of a challenge now.

The Alcanna Footprint in Cannabis

Alcanna is a big company with approximately 2,700 employees. Cannabis is a relatively small part of its business now, but it is the biggest opportunity for growth. “Public companies need to grow. So, cannabis is our growth path,” says Burns. He predicts that the company’s cannabis and liquor businesses could be equal in size within 10 years.

Currently, Alcanna has eight cannabis stores open for business in Alberta and one in Toronto, Ontario. The company has an additional 29 stores under construction in Alberta, which are slated to open by the end of this year or early next year.

Provinces like British Columbia, Manitoba, and Saskatchewan are less of a priority for the company. Alcanna may enter those markets at some point, but Ontario is the largest growth opportunity in the immediate future.

The company is anticipating that Ontario will fully open the process for licensing in December, according to Burns. The company is working on a management contract with a license lottery winner in the province, and it has 75 sites prepared when the Ontario government emerges from this period of conservative licensing.

When it comes to growing its business, Alcanna is focusing more on organic expansion than acquisitions. Companies interested in being acquired do not necessarily have the best real estate locations, while Alcanna has secured prime locations, according to Burns. But, the company remains open to the possibility of acquisitions, mergers, and partnerships.

Earlier this year, Alcanna entered into a $70 million revolving credit facility. The company’s balance sheet is strong, and Alcanna is well-funded for at least the next year to year and a half, according to Burns. If something, such as Ontario opening the market to private sector retail, happens, the company may access the capital markets sooner.

Alcanna’s liquor sales have been robust in 2019, and Burns expects that to continue. When it comes to cannabis, the company is just ramping up – the most exciting growth will start to happen in 2020. More product types will be available, and the company will have more stores open.

While supply has been a challenge, as well the economy in Alberta, Burns sees Alcanna as well-positioned. “We believe our size, our relationships, the quality of our real estate, and our experience sets us up in both businesses to become and remain the market leader.”

To learn more, visit the Alcanna website. Listen to the entire interview: