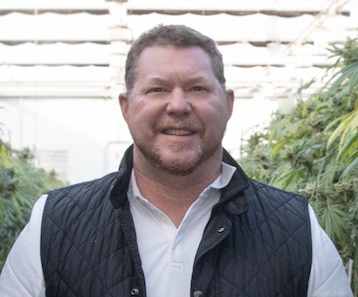 Lowell Farms Chairman George Allen spoke with New Cannabis Ventures back in December 2020 when the company was Indus Holdings. Since then, the company has acquired Lowell Herb Co. and adopted the name Lowell Farms (CSE: LOWL) (OTCQX: LOWLF). The deal brought together the branding of Lowell Herb Co. and the infrastructure of Indus Holdings. CEO Mark Ainsworth touched base with New Cannabis Ventures to talk about integration, the new business unit Lowell Farm Services and plans for further growth. The audio of the entire conversation is available at the end of this written summary.

Ainsworth has a background in bakery manufacturing. He worked with an organic bakery manufacturing company making products for Whole Foods, an experience that gave him an eye for quality and value for consumers. He was approached by a couple of people interested in launching what could become Indus Holdings, now Lowell Farms.

At the time, Ainsworth saw dispensaries selling products in Ziploc bags, and he immediately started thinking about consumer safety. Indus was launched with the intention of operating with total quality management in mind. Seven years ago, the company started with the infrastructure for edible manufacturing, and now, it is a fully vertical business with a footprint in California and a brand presence extending to more markets.

As the company has grown, it has attracted talent from other cannabis companies, according to Ainsworth. A number of team members have thrived in the company’s working environment and worked their way up. For example, Eriela Atilano went through a number of promotions and now works as Vice President of Operations. In this role, she is leading the launch of the company’s Lowell Farm Services business unit.

The company invested a lot of resources in creating an infrastructure that could handle a high volume. Indus had brands but not a single one that stood out. Lowell Herb Co. had a standout brand in its Lowell Smokes, but it didn’t have a farm or extensive distribution. Together, the two companies have the infrastructure and great brand story, according to Ainsworth.

Since the transformative deal, the distribution points for Lowell products have more than doubled. The company is also focused on increased quality. In addition to the appealing packaging, Lowell pre-rolls are made with 100 percent ground flower, rather than including trim or other plant material.

Bringing Lowell Herb Co. onboard was a learning process for the team. The integration went well, but the team now has the knowledge to make that process even smoother whenever the company decides to pursue another accretive deal, according to Ainsworth.

Lowell Farms has a widespread distribution reach in California, reaching up to Tahoe and Mammoth and down to San Diego. The company operates 15 routes per day, some running five days a week and others once a week. In total, Lowell Farms serves about 85 percent of licensed retailers in the state, according to Ainsworth.

The company is preparing now for the eventuality of federal legalization and cross-border transactions. Lowell Farms has made acquisitions and infrastructure decisions that will help it be ready for that future, rather than waiting and being months behind other operators, according to Ainsworth.

Lowell Farms recently launched a new business unit: Lowell Farm Services. This B2B arm of its business offers processing services to other operators in the California market. The company recognized a market need for drying space, and, already, the team is being inundated with calls. The company is on week three of owning this new facility, and its drying rooms are either filled or booked, according to Ainsworth.

Expanding to Other Markets

The company is taking its Lowell Smokes brand to Illinois and Massachusetts through a licensing agreement with Ascend Wellness Holdings.  Products should launch in Illinois by the end of the summer and in Massachusetts by early fall, according to Ainsworth. Lowell Farms is taking an intentional approach to growth beyond California, looking for accretive partnerships rather than pursuing new states solely for the sake of expansion.

Right now, Lowell Farms is focused more on licensing agreements rather than building infrastructure in new states. States like Nevada and New York are potentially of interest. The company previously had a facility in Nevada, which ultimately did not fit with its strategy, but the team feels there is an opportunity to bring licensed brands to the state, according to Ainsworth.

The appetite for M&A is there, according to Ainsworth, and Lowell Farms is open to accretive deals like the Lowell Herb Co. transaction.

What’s Ahead for Lowell Farms?

Geronimo Capital led a recapitalization of the company in 2020. The company is currently on plan. Allen takes the lead on fundraising efforts while Ainsworth focuses on building the business and the team.

Lowell Farms announced $11 million in Q1 revenue, and Ainsworth expects to see growth in the remaining quarters of this year. For example, he expects Lowell Farm Services to demonstrate growth in Q3 and really reach its breakout point in Q4.

The Lowell Farms team uses comprehensive KPIs across all of its divisions to help guide the company forward. Each team regularly meets to track progress across those metrics. If they spot any trend heading in a direction they don’t want, the company mobilizes resources to drive improvement.

The company has found its footing following the Lowell Herb Co. transaction. Now, emerging from the COVID-19 pandemic, the team is prioritizing consumer engagement. All teams are aligned and pursuing the goal of building a great American cannabis brand, according to Ainsworth.