The company issued a news release to explain the move and posted this video as well:

Some of the key points are that the company has nine profiles, included three for THC-dominant, three for CBD-dominant and three for balanced products. It uses a color scheme to denote the different profiles, and each category has three different potency levels (100 for low, 200 for medium and 300 for high). Tilray Profiles uses the same system for both dried flower and oil products, and it appears that the label will also include strain name, though the news release suggested that it would include just the category (sativa, indica or hybrid) and terpene information, when available.

The strategy that Tilray has adopted is similar to branded generics in the pharmaceutical industry. Generic drugs are alternatives to branded pharmaceuticals that are the same chemical compound that can be sold (with FDA approval) once the patent protection has ended for the original pharmaceutical. While there are some unique strains in the cannabis industry, most producers are selling the exact same ones.  Tilray, by calling it “T200” instead of “Harmony”, has created its own brand.

While many consumers or patients may seek out a particular strain, new patients and especially doctors are likely to prefer the marketing approach of Tilray. One big advantage as a producer is that it can substitute different strains depending upon market conditions and still satisfy the customer, who is buying “T200”. The producer is also better able to discuss the attributes of its products when it has this proprietary name rather than a street name.

Tilray didn’t pioneer this marketing approach. Mettrum, which is now part of Canopy Growth (TSX: WEED) (OTC: TWMJF), was the first of the Canadian LPs to use color coding with proprietary names rather than common strains, employing the Mettrum Spectrum: 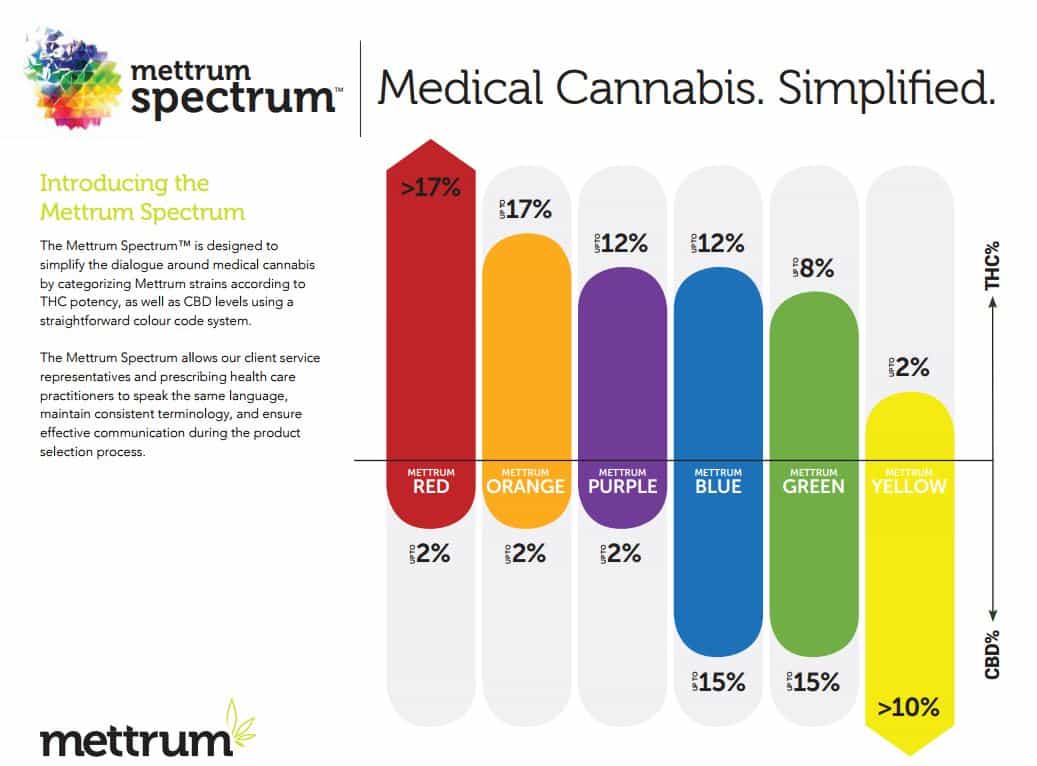 The Mettrum products fall into just six color-coded categories that apply to both dried flower and to oils (three oils, including high-CBD in yellow, balanced in blue and high-THC in red). Mettrum doesn’t share the name of the underlying strains. Interestingly, Canopy Growth appears to have extended Mettrum methodology to some degree to the rest of its products as seen  on Tweed Main Street, which allows visitors to “shop by spectrum”. 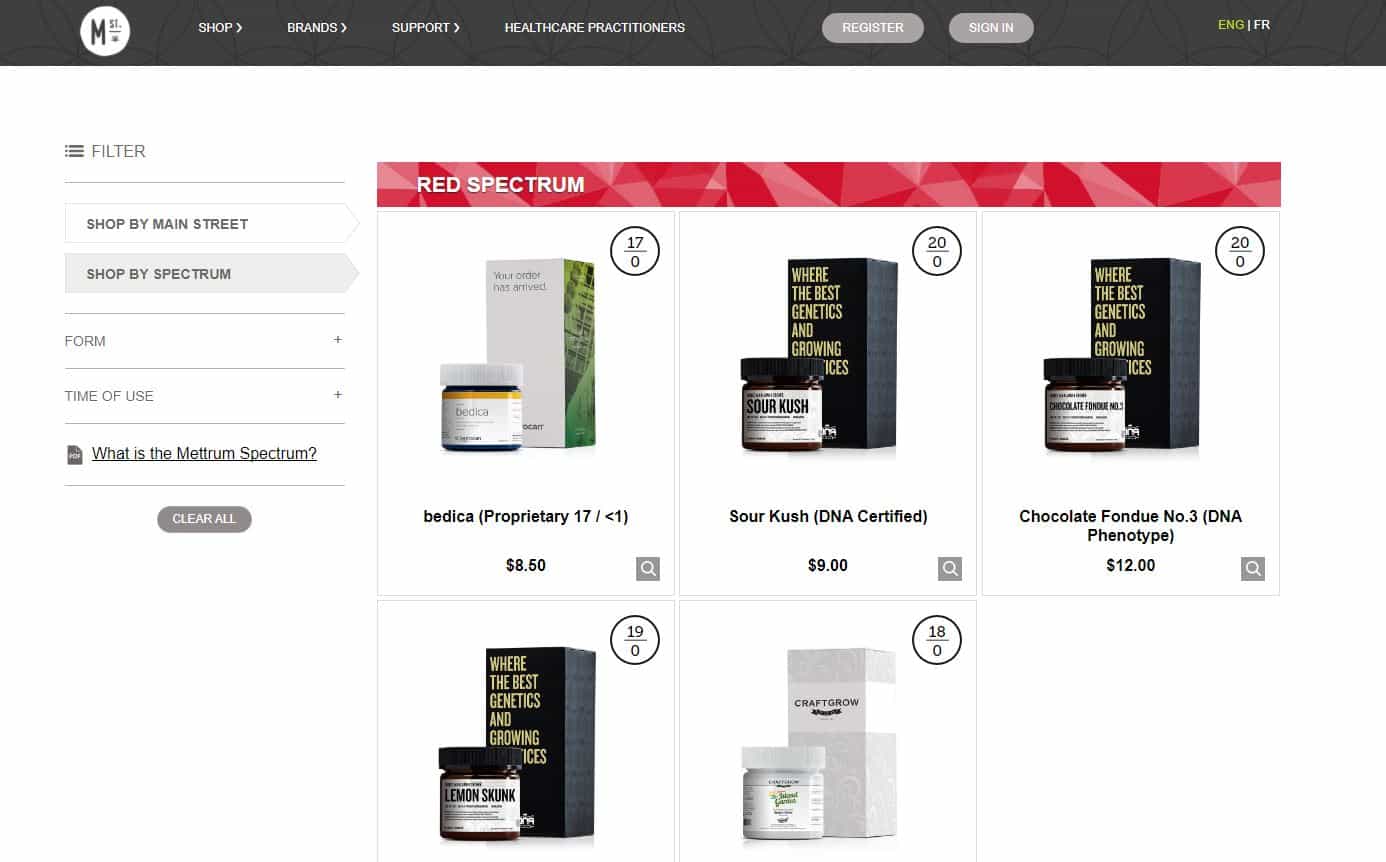 Last week, Canopy Growth announced its new global brand as Spectrum as well, suggesting that the “intuitive colour-based system… has served to position Mettrum as an approachable cannabis brand in Canada.” Marketing by profile or by spectrum will most likely appeal to doctors and patients in new medical markets, like Germany, where both Tilray and Canopy Growth are both likely to be very active as the company implements insurance-covered, pharmacy-distributed medical cannabis.

ABcann (TSXV: ABCN) (OTC: ACCBF) uses the branded generic strategy to some degree as well, with its products offered without conventional strain names (though they are available to those who are curious) The bottle doesn’t mention the underlying strain name, which is “Nebula”: 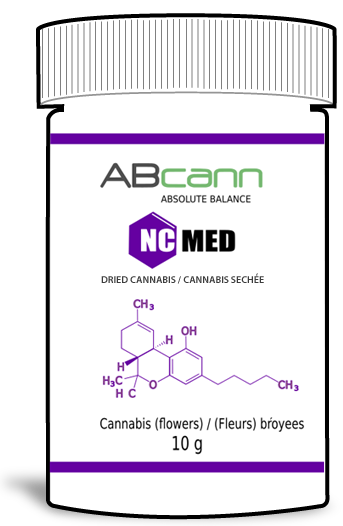 MedReleaf (TSX: LEAF) (OTC: MEDFF) uses a mixed strategy, with some of its products sold with their street names and others under a different name, though it includes the common name as well, like “Stellio” instead of “Kosher Kush”: 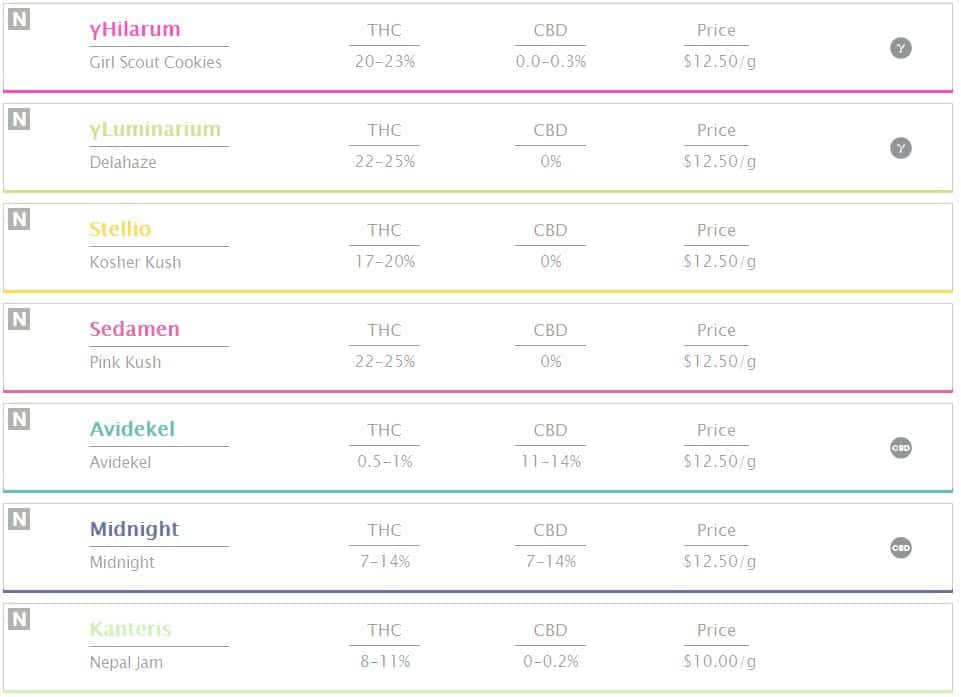 Aurora Cannabis (TSXV: ACB) (OTC: ACBFF) also markets common strains under its own labels, though it makes clear the street name as well:

CanniMed (TSX: CMED) (OTC: CMMDF) takes a different approach with its oils and dried flower, describing the product solely by numbers based on THC and CBD percentages (with no revelation of the strains). CanniMed 1-13 means it has approximately 1% THC and approximately 13% CBD:

In the U.S., we have seen some examples of marketing by profile or spectrum as well. One that comes to mind is Vireo Health, which operates in Minnesota and New York and just won a cultivation and production license in Pennsylvania and was awarded pre-approval for both cultivation and processing in Maryland. It uses a five-color system, and it applies the spectrum to its oils, vaporizers and capsules. 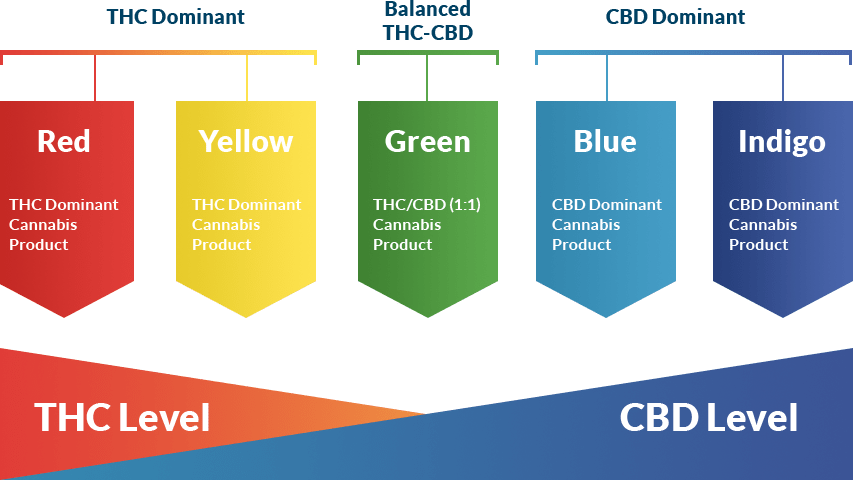 While it is helpful to categorize by cannabinoid potency, one shortcoming is that these systems are not incorporating terpenes into their classification. Fortunately, many LPs in Canada are including terpene profiles in their test results. Here is an example of a test from Aurora Cannabis: 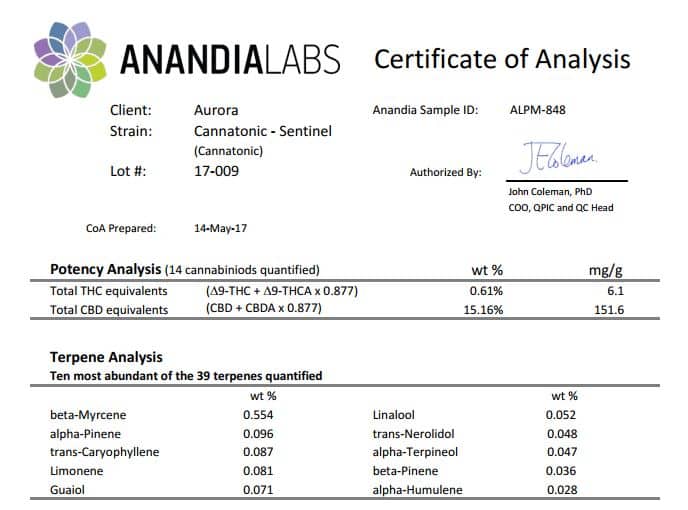 Look for these categorizations to evolve in the coming years as these companies begin to better understand the role of terpenes and how they interact with the cannabinoids.

Tilray’s new system of marketing its products reflects how the market is changing, with consumers and patients (and their doctors) becoming less focused on the street name and more interested in the effects of the products. The branded generic strategy for medical cannabis providers is one that could prove helpful, especially for oils, in competing in a commoditized market.

What do you think about marketing cannabis products by spectrum or profile rather than street name? Join the conversation in LinkedIn group Cannabis Investors & Entrepreneurs.