In what appears to be one of the most successful cannabis industry investments to date, MedMen Opportunity Fund achieved realized and unrealized gains of about C$33.5mm on a C$10mm investment it made in late 2016 into Canadian licensed producer MedReleaf (TSX: LEAF) (OTC: MEDFF), which began trading this week on the Toronto Stock Exchange after its $100mm IPO. What’s most remarkable is that fund’s inception was just over a year ago and that the fund managers had limited prior investment management experience. MedMen CEO Adam Bierman, COO Andrew Modlin and Chief Strategy Officer Chris Ganan  (pictured above) and their team are accidental fund managers who created the fund to leverage their operational expertise and to fill a void in the market.

MedMen closed its MedMen Opportunity Fund in April due to the pending liquidity event. The fund had originally targeted a raise of $100mm  but had raised approximately $60mm from 81 investors, investing into seven different projects. Most of these were in California and Nevada, but the company also acquired one of the five New York license holders, Bloomfield Industries. In addition to being Canadian, MedReleaf also differed from the other companies in which MedMen invested because it didn’t rely upon the fund for its operational expertise.

The MedReleaf prospectus disclosed the size of the fund’s investment and its cost, a total of 4.79mm shares or 5.8% of the company on a pre-IPO basis:

It was a chance meeting in early 2015 that eventually opened the door to one of the most successful investments to date in the cannabis industry. CEO Bierman attended an event in Vancouver hosted by Seth Adler of CannEconomy. There, he met MedReleaf CEO Neil Closner and began to develop a relationship. In September of 2016, an insider at MedReleaf was looking to exit, and this provided an opportunity for MedMen to buy the stock. Several weeks later, when the company was raising capital at $2.96, MedMen bought additional shares. The math suggests that the initial purchase was at approximately $1.65.

MedMen Opportunity Fund was one of several investors selling shares in the 10.7mm share IPO: 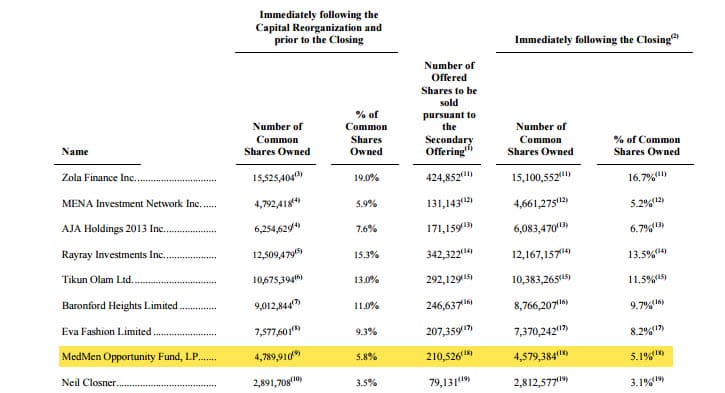 At the $9.50 IPO price less the 6% underwriting commission of $0.57, the fund booked a profit of C$1.44mm, or approximately US$1.065mm. Combining the realized gains with the unrealized gains from the balance of its holdings (assuming a price of $9.10, producing an unrealized gain of C$32.1mm, the fund’s investment has returned approximately  335% for its 81 investors in less than ten months. Bierman indicated that the company has confidence in MedReleaf,  likes the long-term opportunity in Canada as the market embraces full legalization and expects to hold onto a portion of the shares over time.

MedMen, which closed its first fund in April due to the pending liquidity event, is actively pursuing a future fund, one that will likely be an easier undertaking than the first one given the big win. Perhaps more importantly, it has beefed up its team with the addition of former BlackRock managing director, Chris Leavy, who joined the firm earlier this year as Co-Chairman, with the responsibility of helping oversee investment strategies for the firm’s private equity funds.

Leavy was an investor in the fund before joining the firm, which attracted him for several reasons. First, his own background is in value investing, and he believed then and continues to believe that direct cannabis investments are significantly undervalued due to the limited number of investors who are able to participate in the market. Second, he shared values with how Medmen was running the fund, including conservative modeling and a deep understanding of regulatory risk. Finally, he appreciated the operational expertise of the fund’s managers, a trait that he thinks separates if from other funds.

Bierman is excited with the success of the MedReleaf transaction as well as the operational improvements the company has seen in one of its investments, but he is quick to point out that the MedReleaf gains are a win for the industry and investors in general. At this point, there are very few funds dedicated to the cannabis industry, especially those that are willing to invest in companies directly growing, processing or dispensing. A few more success stories like this one, and more capital will likely be directed to the cannabis industry.