This has been a tough year for cannabis stocks! In 2022, the Global Cannabis Stock Index has declined 53.5%, making a new low this week before a sharp mid-week bounce that left it up 3.6% quarter-to-date from the former closing low set on June 30th. It seems easy to lose money buying cannabis stocks, though we believe that this is a great time to do so with low valuations and better fundamental trends ahead.

One part of the market that has been especially pressured are the companies that went public by merging with Special Purpose Acquisition Corporations (SPACs). SPACs are companies that go public to buy assets or an entire company. There hasn’t been a success story at all, and most have declined substantially from the price of the SPAC at the IPO: 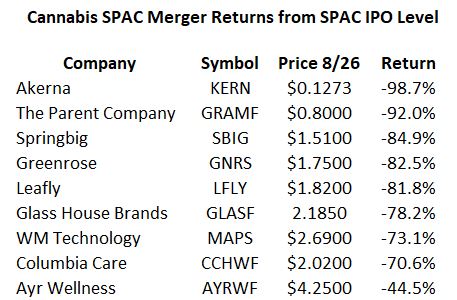 Many people have been burned by buying SPAC mergers and have been surprised by these deep falls. There is a subset of investors who are now wary of buying these names just because of how they went public. At 420 Investor, our premium subscription service for cannabis investors, I take a different view.

Having the complicated history of being a former SPAC merger is no longer relevant at this time in our opinion. Among the companies that went public via the SPAC merger, Ayr Wellness is on my Focus List and is included in my model portfolios. I don’t own a position currently, but I do follow Columbia Care, which is merging with Cresco Labs. In the ancillary space, I follow WM Technology and own it my model portfolios. I own a small amount of Springbig, which isn’t on the Focus List just yet, in one of the model portfolios as well after purchasing it this past week.

SPACs have not worked at all in the cannabis space, but some of these companies are now becoming interesting after the stocks have experienced a lot of pain. 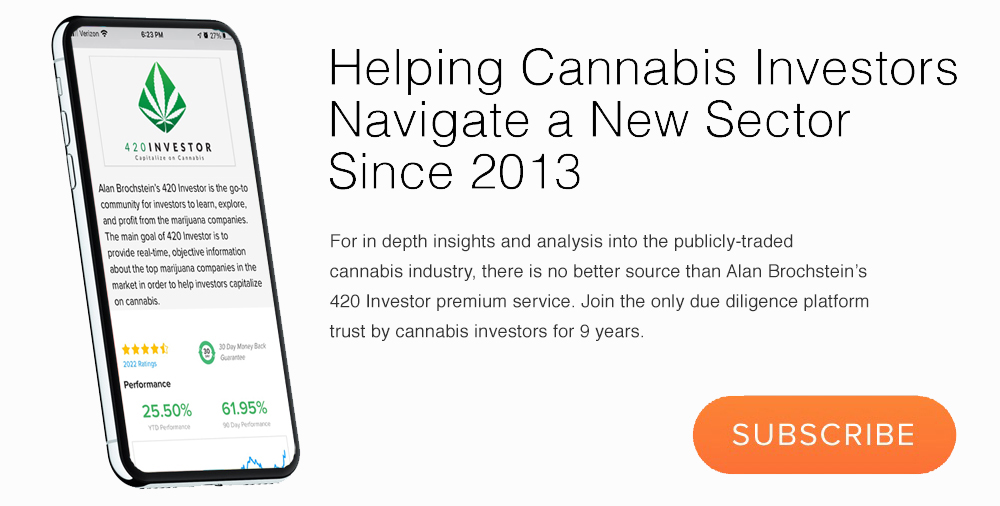 Formerly Sundial Growers, SNDL changed its name as it grew and expanded into other areas of the cannabis space. Earlier this year, the company closed its acquisition of Alcanna and continues to work on realizing the full potential of the acquisition. This week, SNDL announced it had entered into an agreement with The Valens Company (see news below) to acquire all of its stock. In an exclusive interview, CEO Zachary George talks about why he thinks the cannabis industry is ripe for consolidation.

Organigram has experienced record quarter-over-quarter growth during the last several quarters, making it the number two LP in Canada, according to CEO Beena Goldenberg. The company has seen growth in its Shred and Big Bag o’ Buds brands. In 2021, Organigram entered the gummies and hash segments. In an exclusive interview, Goldenberg says the company has a robust portfolio but may find one more tuck-in acquisition to complete its portfolio in Canada.

Aurora Cannabis has acquired a controlling interest in Bevo Farms. Bevo’s experienced management team will remain significant shareholders and stay in place to embark on a robust growth plan. The deal allows Aurora to immediately benefit from a profitable cash flow positive and growing business, and may have the potential to drive long-term value to Aurora’s existing cannabis business via the application of Bevo’s plant propagation expertise.

SNDL and The Valens Company entered into an agreement to combine their businesses to create “a vertically integrated cannabis platform.” SNDL will acquire all of the issued and outstanding common shares of Valens. With 555,500-square-feet of cultivation and manufacturing space and 185 cannabis stores under the Spiritleaf and Value Buds banners, the combined company will offer a complete portfolio of branded products to consumers in Canada through its own supply and distribution channels. “Our companies have been commercial partners since Canadian legalization. I am excited by the strong cultural fit between our teams and humbled by the opportunity to work with Valens’ passionate and innovative leadership,” said CEO Zach George.

Green Sentry completed its acquisition of all of MedMen’s Florida assets for a total consideration of $63 million, plus the assumption of lease liabilities. The purchase was funded with the proceeds of a non-brokered equity raise and a $30 million debt facility from a private lender. The cash deal includes substantially all of MedMen’s Florida-based assets, including a valid medical marijuana treatment center license, a portfolio of 14 premium dispensaries, and its Eustis, Florida cultivation and processing facility with 30,000-square-feet of available canopy. The Green Sentry team has been retrofitting the Eustis Facility since March and expects edibles production to launch in the coming months. The previously announced deal priced the acquisition at $83 million with the deal expecting to close in late April or early May.

TerrAscend completed its previously announced acquisition of KISA Enterprises MI, LLC (Pinnacle), a dispensary chain operator in Michigan, and related real estate assets from KISA Holdings for $28.5 million. The deal includes six dispensary licenses, five of which are operational. The addition of Pinnacle expands TerrAscend’s retail footprint to 17 in Michigan and 32 nationwide. The company intends to rebrand each of the newly acquired dispensaries under either the Gage or Cookies retail brand.

In the wake of its recent acquisition of Loudpack, StateHouse reported Q2 earnings doubled sequentially to $34.6 million. “The second quarter was a landmark period for StateHouse, as we completed the acquisition of Loudpack to create a leading, fully integrated California cannabis company,” said CEO Ed Schmults. “We then launched the first phase of a major integration initiative, which was completed before the end of the quarter and resulted in significant annual cost savings.” During the quarter, the company officially changed its name from Harborside Inc. to StateHouse Holdings. The company also announced that Chief Operating Officer, Ahmer Iqbal is leaving effective Sept. 30.