This data-driven, fact-based tracker will continually update based on new financial filings so that readers can stay up to date. Companies must file with the SEC or SEDAR and be current to be considered for inclusion. When we launched this resource in May 2019, companies with quarterly revenue in excess of US$2.5 million qualified. As the industry has scaled and as more companies have gone public, we have raised the minimum several times subsequently, including a move to US$5 million in October 2019, to US$7.5 million in June 2020, to US$10 million in November 2020 and US$12.5 million in August 2021. Due to the rapid growth in the cannabis industry, we raised the minimum to US$25 million (C$31.5 million) to qualify for what we now call the senior list and introduced a junior list with a minimum of US$12.5 million (C$15.6 million) in September 2021.

At the time of our last update on August 1, 38 companies qualified for inclusion on the senior list, including 31 filing in U.S. dollars and 7 in the Canadian currency. Currently, 30 companies that file in U.S. dollars qualify and 8 that file in Canadian dollars are qualifying for the senior lists, a total of still 38. The junior list now includes 11 companies reporting in U.S. dollars and 7 in Canadian dollars. In August, Cronos Group (TSX: CRON) (NASDAQ: CRON) fell out the American senior group to the junior group, and SNDL (NASDAQ: SNDL) climbed from the Canadian junior list to the senior group. Lowell Farms (CSE: LOWL) (OTC: LOWLF) also joined the American junior list. Red, White & Bloom (CSE: RWB) (OTC: RWBYF) joined the Canadian junior list as did Delta 9 Cannabis (TSX: DN) (OTC: DLTNF). On a combined basis, the Public Cannabis Company Revenue & Income Tracker now includes 56 companies.

Included Companies That Reported in August

Since our last update in early August, there were lots of reports in all of the sectors. 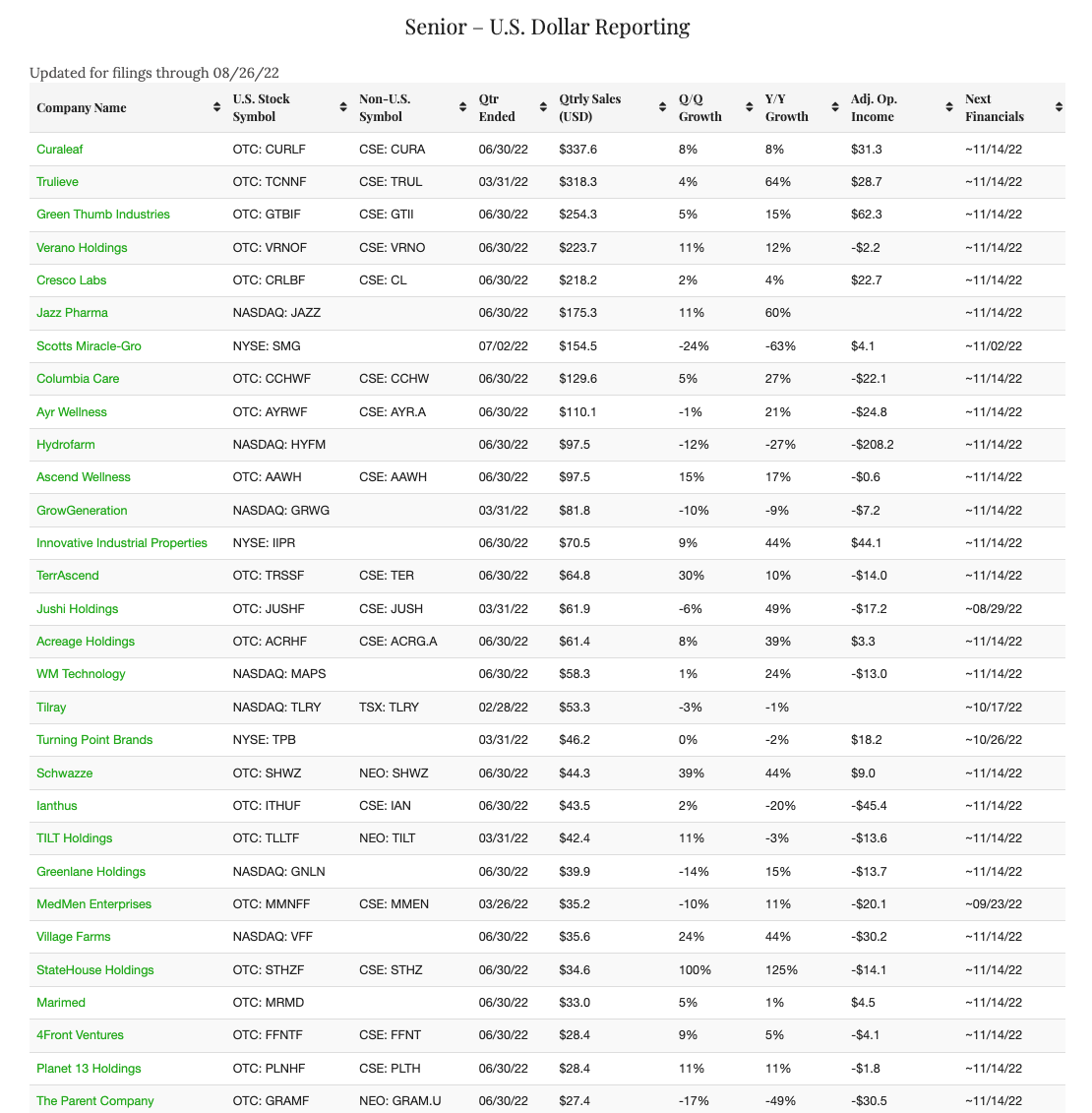 This week, Jushi Holdings (CSE: JUSH) (OTC: JUSHF) will report its Q2 on August 29th. According to Sentieo, analysts expect the company to generate revenue of $70 million, up 13% sequentially. During September, MedMen (CSE: MMEN) (OTC: MMNFF) will announce its Q4 results.

High Tide (TSXV: HITI) (NASDAQ: HITI) has scheduled its Q3 call for September 14th. Sentieo suggests that the analysts expect revenue to increase 10% sequentially to C$89 million. Aurora Cannabis (TSX: ACB) (NASDAQ: ACB) will report its Q4 financials in September. The analysts are expecting revenue will increase 2% sequentially to C$51 million, a decline of 7% from a year ago.

Red White & Bloom moved from not on the list to its top with its Q1 report, which was late. They should report Q2 this week.