As 2018 was nearing an end, Namaste Technologies (TSXV:N) (OTC: NXTTF) CEO Sean Dollinger unloaded shares, which he reported on December 28th, a week after making the sales. He sold a total of 2.357 million shares that he held directly or indirectly, as documented at Canadian Insider: 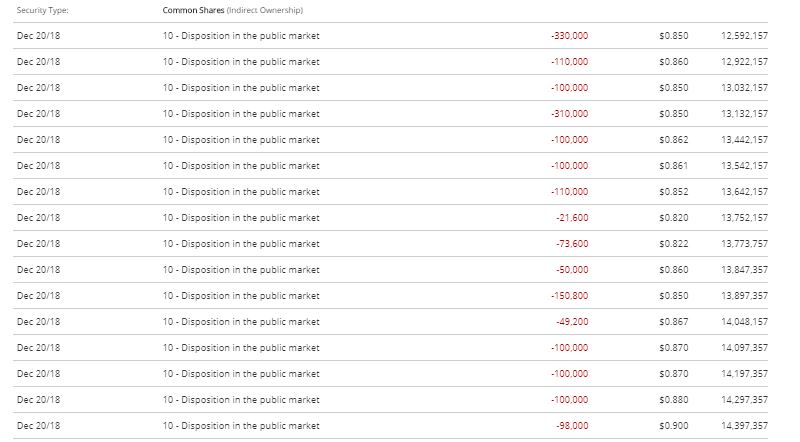 Ordinarily, this type of sale, which represented a small fraction of Dollinger’s holdings, wouldn’t be considered particularly significant. In total, he sold 2.357 million shares, or 11% of his holdings, for total proceeds of C$2.056 million, leaving him with 18.6 million shares.

What was disturbing about the sale was that it was conducted like he was under pressure, with all of the shares sold in a single day after the price of the stock had already collapsed. This chart shows the prices from 12/31/17 through 12/20/18, the day Dollinger dumped his shares, driving the stock to a 52-week low: 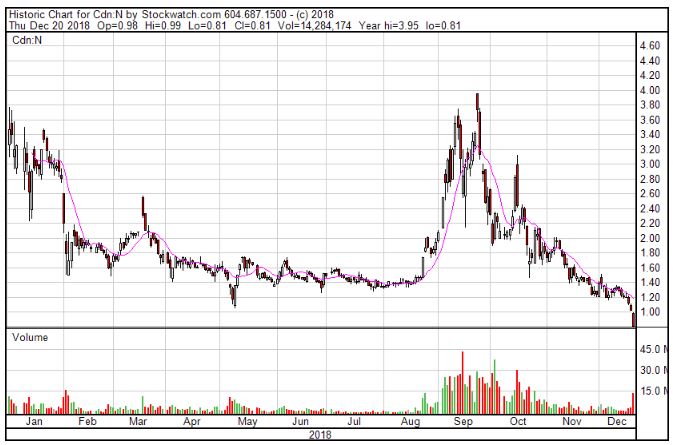 Compounding the perception that these sales were troubling is that the company revealed on January 10th that it had repurchased 460,900 shares just the day before Dollinger sold, paying an average of C$1.08, about 24% higher than where Dollinger sold :

It’s not clear why the company took so long to report this repurchase, nor why Dollinger sold shares. The company never released any information about Dollinger’s sales or its repurchase. It certainly seems improper to have the company buy back shares one day before the CEO sold 11% of his holdings. The company had also repurchased 1.525 million shares from July 25th through August 3rd, which was reported on September 7th, paying C$1.30-1.41. It had issued a press release in late June indicating its intention to repurchase up to 10% of its float, or 25 million shares. The stock didn’t really respond much, even after it received approval on July 16th to conduct the repurchases, and Namaste later announced its intent to list on the NASDAQ on July 23rd and then bought the 1.525 million shares. When the stock took off in August following the market’s rally, it was able to raise C$51.8 million in a revised bought deal, selling units at C$3.00.

Dollinger has been very bullish on his stock. The company hosted a YouTube channel with weekly updates from the CEO and others, and Dollinger often discussed how inexpensive the stock was. Unfortunately, all of these videos have been taken down, as Dollinger recently explained on 12/26 (without addressing his stock sales):

Another concern shareholders should have about the company is the disposition of Dollinger Enterprises US Inc. to ESC Hughes Holding Limited, a party it described as “arm’s length”. It had announced the divestiture in late November, selling the assets (web domains and accounts) for C$400,000 on 12/31/17 and booking a gain of C$286,305 according to the financials for the quarter ending 2/28/18:

Under the terms of the Agreement, Namaste will, through its wholly owned subsidiary, Namaste Technologies Holdings Inc., in consideration of a cash purchase price of US $400,000, convey to ESC the following:

At the time, Dollinger indicated that it would allow the company to uplist from the CSE, which it later did, to the TSX Venture exchange, though it hasn’t yet delivered on its goal of uplisting to the TSX and the NASDAQ. The company also discussed that these operations weren’t particularly profitable.

A review of the Lifted Innovations preliminary prospectus indicates that these same assets were sold subsequently to the company by ESC Hughes, now known as BKN Calla Investments Limited, as of March 16th, just days after Lifted Innovations incorporated, paying C$350K in stock (35 million shares valued at C$0.01). Based on a private placement at $C$0.04 to raise C$400K 9 days later, the stock portion was valued at C$1.4 million. A subsequent raise at C$0.20 on April 5th and April 9th implied the shares were worth  $7 million. The preliminary prospectus, filed on 12/21, the day after Dollinger sold his Namaste shares, indicated that the assets had generated  US$722,649 in revenue and gross profits of US$177,362 following the March 16th closing.

Investors should question not only why the assets were sold for such a low amount but also whether or not the transaction was truly at “arms-length”, as ESC Hughes was led by David Hughes, the Chief Marketing Officer at Namaste. Citron Research discussed this in a report from early October that called the company a “complete fraud“. Namaste wasn’t required to divest these assets but chose to do so on its own accord so that it could move to a higher exchange. The price received was a pittance, especially when one considers that the sales represented about 14% of the company’s overall revenue in FY17, a total of C$677,552.  While the company was likely being valued based upon factors beyond just its current revenue, C$400K was a tiny fraction of the market cap of the company at the time despite these being material revenues.  The sale price was just 59% of trailing sales. Like Dollinger’s one-day dump of 2.357 million shares on December 20th, it appears that the company’s divestiture to a related party at the end of 2017 was a fire sale as well.