In fewer than three months, AdvisorShares Pure US Cannabis ETF (NYSE ARCA: MSOS) has surpassed $100 million in assets under management, with the number of shares increasing on November 25th by 29% from the prior day to 3.8 million. The ETF debuted in early September with an initial seed funding of $2.5 million and now has net assets of $119.8 million. To put the recent growth into perspective, the number of shares of the ETF has grown 171% since the end of October, when there were 1.4 million outstanding.

With its recent growth, the fund becomes the third largest ETF focused exclusively on the cannabis industry, trailing ETFMG Alternative Harvest ETF (NYSE ARCA: MJ) at $873 million and Horizons Marijuana Life Sciences Index ETF (TSX: HMMJ) (OTC: HMLSF) at C$448 million. Unlike its larger peers that track mainly the Canadian LPs, Pure US Cannabis ETF is focused exclusively on the American cannabis industry, with the majority of its holdings in swaps tied to multi-state operators, which comprise the top eight positions and most of the rest: 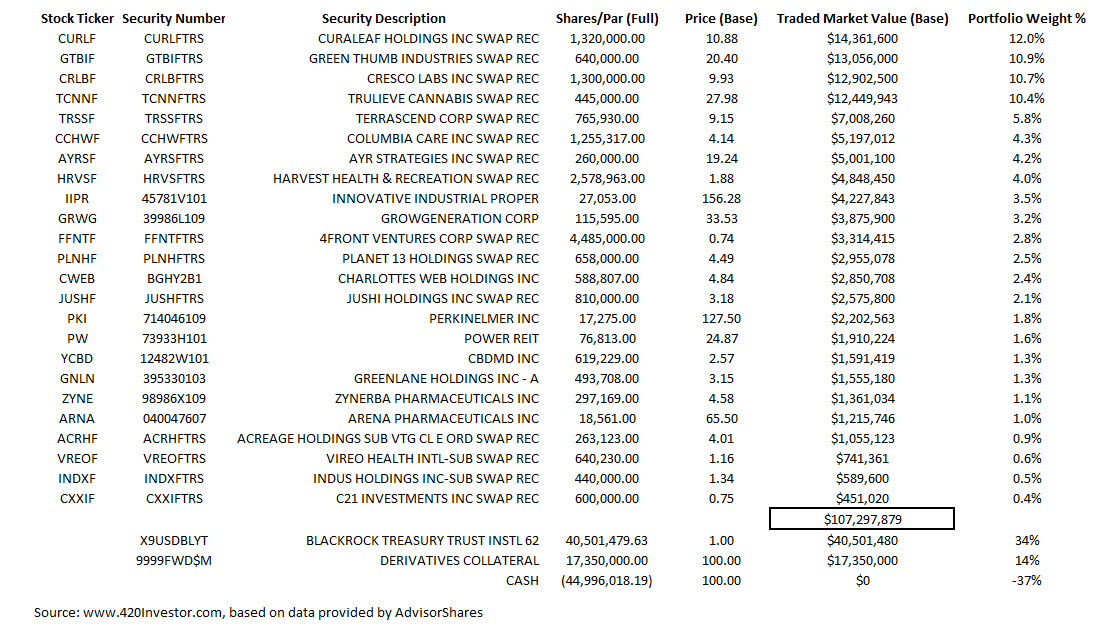 After a rough start, the ETF has performed quite well as the cannabis sector has rallied. With its close at $31.69, it has increased nearly 27% since its initial funding at $25 per share (and 28.5% since the close of the first day of trading), far outperforming the S&P 500: 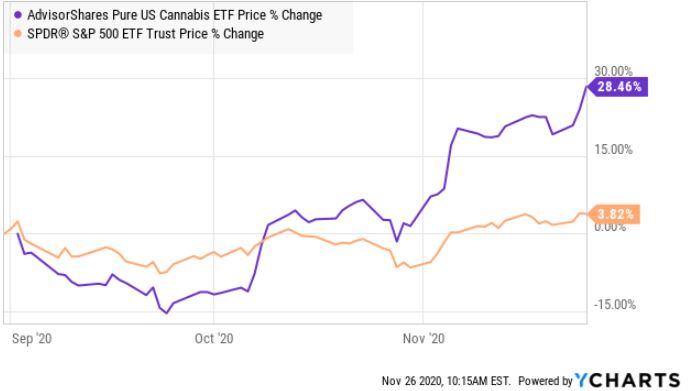 Pure US Cannabis ETF doesn’t have a specific index against which it measures its performance. The New Cannabis Ventures American Cannabis Operator Index seems like a reasonable proxy, and we note that only two of its seventeen holdings aren’t held by the ETF. Since the end of August, the American Cannabis Operator Index has increased 30%, suggesting the ETF is doing a reasonable job of capturing its opportunity thus far: 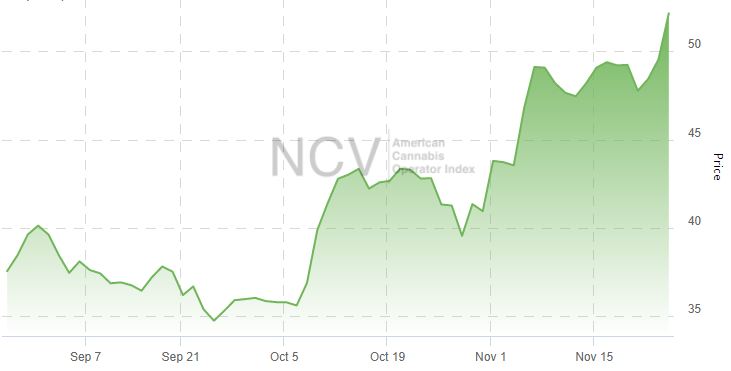 The daily trading volume in the ETF has expanded dramatically in November as the fund has gained size. With the exception of five ancillary companies, a CBD company and two biotech companies, the remaining sixteen companies, all multi-state operators or CBD companies, are listed primarily in Canada with secondary OTC tickers. Pure US Cannabis ETF allows investors to gain exposure to American cannabis industry without having to invest in Canadian dollars or to buy on the OTC. Additionally, the ETF now has listed options trading.

Its purchases have had an impact on the prices of some of its smaller holdings thus far, as their weighting in the fund is substantially higher in some cases relative to their market capitalizations than the largest holdings. As the ETF has gained traction, its buys have begun to impact even the largest names, as I suggested might be the case when I discussed Pure US Cannabis ETF with subscribers at 420 Investor. The September edition of the 420 Investor Newsletter, which detailed the ETF ahead of launch, also included an extensive review of Green Thumb Industries (CSE: GTII) (OTC: GTBIF) as well as a comprehensive explanation of why the elections would be a major driver of higher cannabis stock prices.