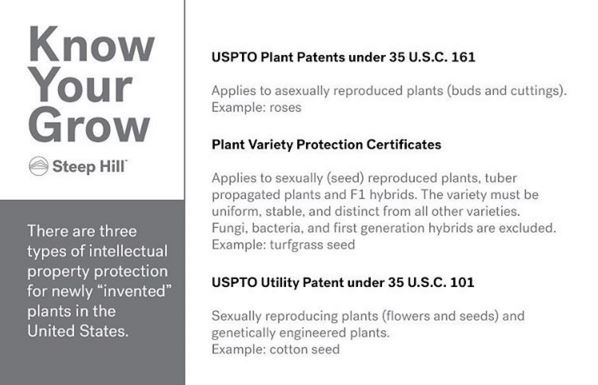 Can cannabis strains be patented, or should they be?  Intellectual property is a topic that can lead to fierce debates among those in the industry.

This past week, the San Francisco Chronicle’s Joe Garofoli stirred the pot with his article “Pot patents: intellectual property becomes a priority“.  In it, he describes the inherent difficulty in obtaining a patent given federal illegality.  He points to the efforts of Steep Hill, the cannabis quality assurance company that is focused on helping its clients establish their proprietary genetics.  Garofoli shares the views of  Reggie Gaudino, who serves as Vice President Scientific Operations, and Director of Intellectual Property and Genetic Analysis at the company, regarding the disregard in the industry for trying to secure intellectual property:

Let me know how that works out for you, because once this is legal, Big Pharma and Big Ag are going to come in here and grab whatever they can.

Garofoli details the efforts of Steep Hill over the past few years to “establish a genetic map of cannabis.”  Gaudino discussed this at length in a recent interview with Shango Los of Ganjapreneur.

Gaudino will be speaking at the New West Summit this weekend on a panel “The Future of Testing” along with fellow Steep Hill Chief Scientific Consulatant, Dr. Donald Land, Dan Yazbeck, CEO of MyDx, and Justin Fischedick of Excelsior Analytical Laboratory.

In response to the Garofoli piece, Mike Masnick published “The Ridiculous Rush To Try To Patent Pot” on blog TechDirt, where he serves as editor.  Masnick called it “ridiculous on multiple levels” and insisted that the whole topic is “deeply problematic.” He concludes:

Once again, we see more evidence of how frequently patents have nothing to do with “promoting” innovation, but are used to stifle innovation and competition.

We reached out to David Lampach, the CEO of Steep Hill, which is a client of NCV Media, for his reaction:

I think it is much more desirable for the cannabis industry to get its head out of its ass and protect what it has, before someone else does it.  The patent system is real and pretending it doesn’t apply here doesn’t help anyone.

Lampach argues that Masnick misses the point.  By not making an effort to lock down potential IP, the industry pioneers could miss out protecting themselves later when federal law changes and big companies enter the space without it having been developed.

Plant patents are governed by 35 U.S.C. 161. These patents are granted to those that have invented or discovered and asexually reproduced a distinct and new variety of plant. The patent is good for 20 years from the date of filing the application. Patents are exclusionary rights. They exist for a limited amount of time so that inventors have time to make money off their invention before others are able to copy that invention and undersell the inventor.

So, it isn’t absurd to imagine that the Patent and Trademark office could grant patents for cannabis strains. In fact, there are multiple marijuana patent applications already in the hopper, like this one and this one (though the latter one also includes some method patents).  The PTO can take years to actually issue a patent, so it appears that all of the modern plant variety applications are published in the pre-grant phase — meaning, the PTO has not actually issued the patent.

His bottom-line really justifies the steps that companies like Steep Hill are taking:

Nevertheless, the fact that it takes so long to get a patent may actually bode well for those in the marijuana industry who have already applied. By the time these applications are actually reviewed, we may be in a more favorable political climate where the PTO has no reason to stand in their way.

In the coming years, with many companies entering the legal cannabis industry and applying scientific techniques that are common in other industries, we should expect advances in the ability to define intellectual property. It seems that cannabis growers would be wise to pay attention to this controversial topic.