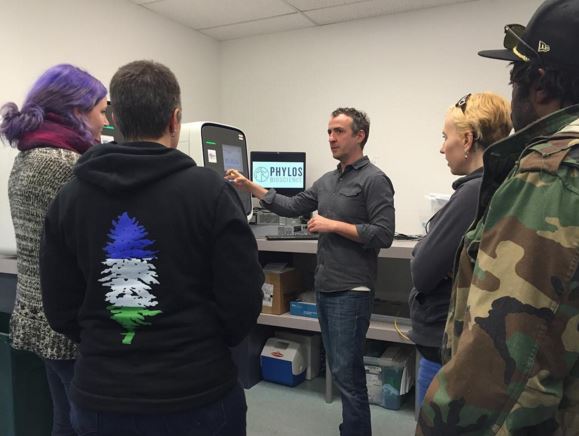 Newsweek profiled Mowgli Holmes, Chief Scientific Officer of Phylos Bioscience, an Oregon-based research and diagnostic company focused on cannabis genomics that he co-founded with CEO Nishan Karassik.  Holmes received his PhD from the Columbia University Department of Microbiology and Immunology. He isn’t the only PhD either, as the team and the advisory board is highly credentialed.

The company is on a mission to sequence the DNA of cannabis.  The article details his background, his initial efforts to enter the industry and the current operations of Phylos Bioscience, which operates in the federally-funded Oregon Health and Science University.  Consequently, the lab handles DNA samples only and not cannabis itself.

The samples come from all over the world, via often fascinating treasure hunts conducted largely by word-of-mouth research. There are two or three other labs working on cannabis genome projects, but none have collected nearly as many specimens as Phylos, and most of their samples come from marijuana dispensaries, not from original landraces, Holmes says. He has collected nearly 2,000 specimens so far and entered 1,500 of them into a software program that organizes the DNA into clusters, outputting a visual representation that looks like a constellation of stars.

Mowgli intends to give his data to the Open Cannabis Project in order to keep the information in the public domain. The company, which offers testing services, will not be filing patents on any strains or trying to genetically modify any cannabis strains.  In fact, Phylos Bioscience believes that cannabis strains shouldn’t be patented at all.