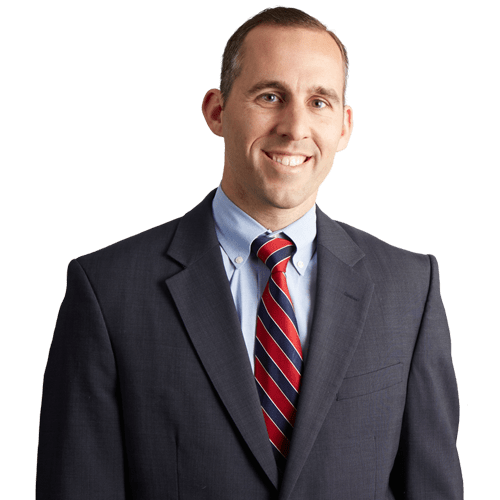 This Summer, Poland became the twelfth country in the European Union (EU) to permit the sale of medical cannabis products to treat certain medical conditions. In recent years, countries across the globe have reformed their marijuana laws to allow patients and consumers greater access to marijuana. There are currently twenty-nine (29) countries that recognize medical marijuana, but only two (Canada and the Netherlands) export beyond their borders.

In 2016, North American consumers spent $6.7 billion on legal cannabis products, up 34% from 2015¹. In that same year, the United States saw more states legalize medical and recreational cannabis than in any previous year. To date, twenty-nine (29) states and the District of Columbia permit the sale of medical marijuana to patients to treat specific medical conditions. Additionally, seven (7) states and the District of Columbia have legalized the sale of recreational marijuana for all adults over 21 years of age.

The U.S. market has seen unprecedented growth despite the fact that marijuana (medical and recreational) remains federally illegal across the country. In the United States, federal law prohibits the manufacture and sale of all medical cannabis. The U.S. government regulates all drugs through the Controlled Substances Act (CSA), which does not recognize any difference between medical and recreational use of cannabis. The government places every controlled substance in a category or schedule based on its potential for abuse and its medicinal value. Under the CSA, cannabis is classified as a Schedule I drug, which means the federal government views cannabis as highly addictive and having no medical value. As a result, the U.S. marijuana industry has been wholly intrastate – meaning all manufacture and sale must be conducted within a state’s borders subject to strict state control. Cannabis cultivators, processors and retailers may not sell outside the state in which they are licensed to operate and no U.S. manufacturers are permitted to export outside the country.

In 2017, Canadian Prime Minister Justin Trudeau fulfilled his campaign promise and introduced legislation to legalize the use of recreational marijuana for all Canadians over the age of 18. Canada’s recreational marijuana market is expected to be operational by July 2018. Canada is one of only two countries that allows export of medical cannabis products. Currently, five Canadian companies export products to a combined six countries. 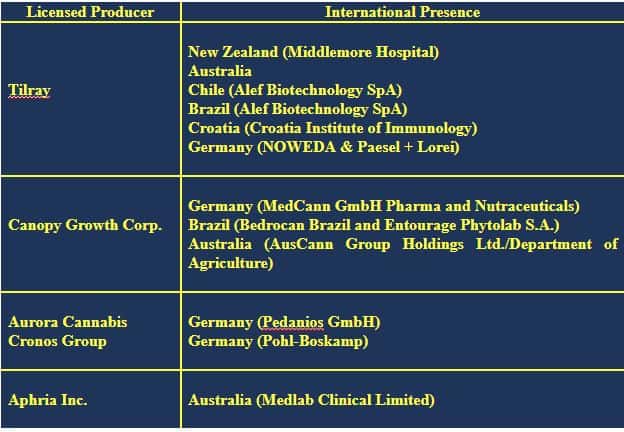 Local, national and international legislation will continue to shape the future of the legal cannabis industry in the coming years. Based on the current legal landscape, industry growth will follow two primary paths: (1) domestic cultivation and sale within the United States; and, (2) international trade agreements to permit the importing and exporting of medical cannabis among foreign countries. While the U.S. market may remain the largest in the world, the current federal ban on all forms of marijuana will keep U.S. manufacturers and retailers out of the international markets for the foreseeable future. With U.S. companies excluded, there is enormous potential for growth in countries with trade agreements that will allow the importing and exporting of medical cannabis. Poland is one such country.

On July 24, 2017, Poland’s Lower House of Parliament overwhelmingly voted to legalize medical marijuana, which was backed by the recommendation of the nation’s Health Care Committee. The bill was authored by MP Piotr Liroy-Marzec – a Polish hip hop artist-turned-politician who has long advocated for the legalization of medical cannabis. Liroy-Marzec’s original proposal would have allowed Polish citizens to cultivate their own medical cannabis but Polish legislators dropped that provision in favor of a regulatory system in which doctors and pharmacists will control distribution of the drug. The law does not permit domestic cultivation of cannabis, so for the time being Polish citizens must rely on imported medical marijuana.

While the law does identify specific qualifying medical conditions that can be treated with medical cannabis, such as MS and epilepsy, the law gives doctors the discretion to prescribe cannabis for any condition that can be treated with cannabis if supported by research. This is significant as many countries and states limit the use of cannabis to treat a finite list of medical conditions. In the U.S., expanding the list of approved conditions can require additional legislation and can take months or years.

Since the law did not authorize domestic cultivation, Polish patients will rely on a limited number of medical cannabis exporters. Currently, Canada is the exporting hub for companies across the globe to obtain medical cannabis for use by patients in their respective countries². Canada currently exports medical cannabis to Australia, Brazil, Chile, Croatia, Germany and New Zealand³.

As the first G7 nation with a national medical cannabis system, Canada has quickly become the worldwide leader in medical exports⁴. Most recently, two Canadian cannabis producers – Cronos Group and Tilray – reached deals to provide medical cannabis to most of Germany’s 20,200 pharmacies⁵. Earlier this year, Germany became the largest federally legal medical cannabis market in the world. Furthermore, German citizens will very likely have access to health insurance that covers the cost of medical cannabis.

Canada, however, is not alone. Presently, Dutch cannabis company Bedrocan ships product to Canada, Australia and EU nations, and the Dutch government’s Office of Medicinal Cannabis sends shipments of medical marijuana to Italy, Germany and Finland. 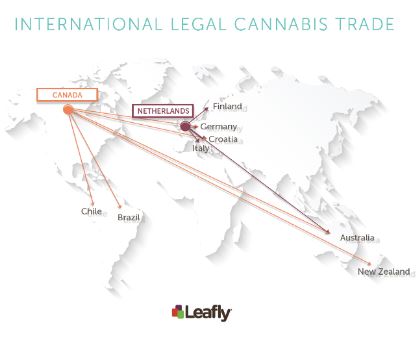 In 2015, Colombian President Juan Manuel Santos approved a bill legalizing marijuana for medicinal and scientific purposes. The law also allows the creation of export licenses to be issued by the National Council on Drugs, which will grant Colombian producers the right to sell medical cannabis products in countries where they have been legalized.

Finally, Israel, one of the world’s leaders in medical cannabis research, has recently taken steps to permit export of cannabis outside its borders. These recent changes in the international market suggests that by the time Poland finalizes regulations to implement its new cannabis law, it should have ample suppliers ready to import medical cannabis to Polish patients.

As the international market for medical cannabis develops, pioneering companies will have a unique opportunity to build strong brand recognition, access favorable financing, build strong patient bases, and position themselves to take advantage of the lack of American competition during their first few years of operation⁷. As noted above, given the fractured state of marijuana legalization in the United States, and the lack of any mechanism to permit cannabis export, U.S. cannabis producers will be left out of the growth in the international markets for the time being.

Peter is also a litigator in the firm’s Professional Liability and Mass Tort groups, where he represents individual, institutional, and corporate clients in all aspects of tort litigation in Pennsylvania and Delaware state and federal courts. He is experienced in all phases of discovery, trial, and appeal.

Above all, Peter is passionate about building and maintaining strong relationships with his clients and providing the most cost-effective solutions to their legal challenges. Peter lives in Kennett Square, Pennsylvania, with his wife and three children.