Nineteen companies currently qualify for inclusion, with eight filing in U.S dollars and eleven in the Canadian currency. Since our last update, three public companies qualified for inclusion and have been added to the list, including newly public Green Thumb Industries (CSE: GTII) (OTC: GTBIF) and MedMen Enterprises (CSE: MMEN) (OTC: MMNFF). Both companies file in U.S. dollars, though their primary listing is in Canada.

In mid-June, MedReleaf (TSX: LEAF) (OTC: MEDFF) reported what will likely be its last quarter as a stand-alone company, as it is being acquired by Aurora Cannabis (TSX: ACB) (OTC: ACBFF). On a combined basis, the two companies would be the leader in terms of revenue for the sector. Sales in its fiscal Q4 ending March 31 grew 16% from year-ago levels, but, at C$12 million, were about 5% below the consensus estimate. In the late June, Canopy Growth (TSX: WEED) (NYSE: CGC) reported sales for its fiscal Q4 ending March 31 of almost C$23 million, up 55% from a year ago and up 5% from the prior quarter. The results fell about 8% below the consensus forecast. Additionally, Friday Night (CSE: TGIF) (OTC: TGIFF), which is listed in Canada and reports in Canadian dollars but operates in the United States, reported its fiscal Q3 ending April 30th, with sales right at the level required to qualify for inclusion. The company’s C$3.32 million in sales grew 12% from Q2 levels, split between its Nevada cultivation and production operations (C$2.03 million), its hemp-based CBD products (C$1.19 million) and its security operations (C$0.28 million) 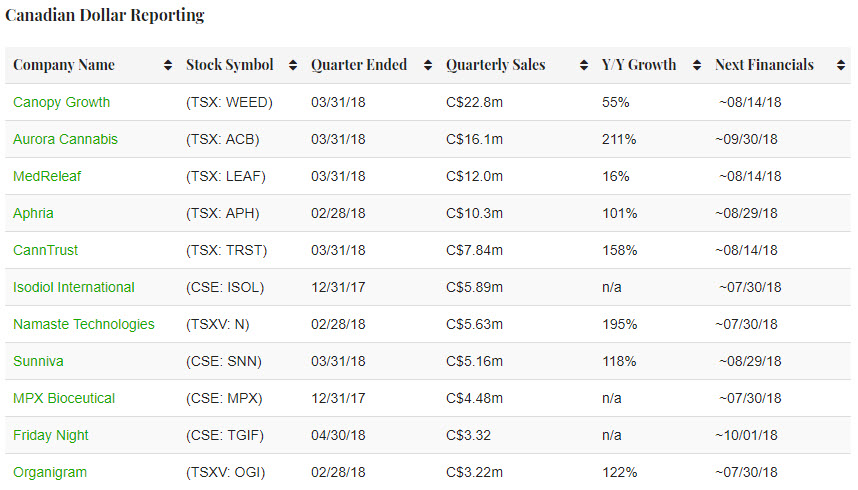