After substantial slowing in year-over-year growth across 8 markets that BDSA covers in November, cannabis sales growth bounced back in December. The January data suggests a mixed picture of growth trends, but one conclusion is quite apparent: Flower continues to be in exceptionally strong demand, signaling that the legal markets continue to convert consumers of the illicit market. In this review, we will look at the markets one-by-one, beginning with the more mature Western markets and then concluding with the newer Eastern markets.

BDSA provides coverage for Arizona, California, Colorado, Nevada and Oregon. In January, growth ranged from 19% in Nevada to 48% in Oregon compared to a year ago.

During January, Arizona medical cannabis sales totaled $87.7 million, down 4% from December and up 23.9% from a year ago. This rate of growth is down from 30.3% in December and 28.4% in November and represents the slowest growth in more than a year. In contrast to most of the other states, flower grew only inline with overall sales, increasing 22.5%, with concentrates expanding 29.6%. Pre-rolls, a relatively small category, grew by 83.1% compared to a year ago. 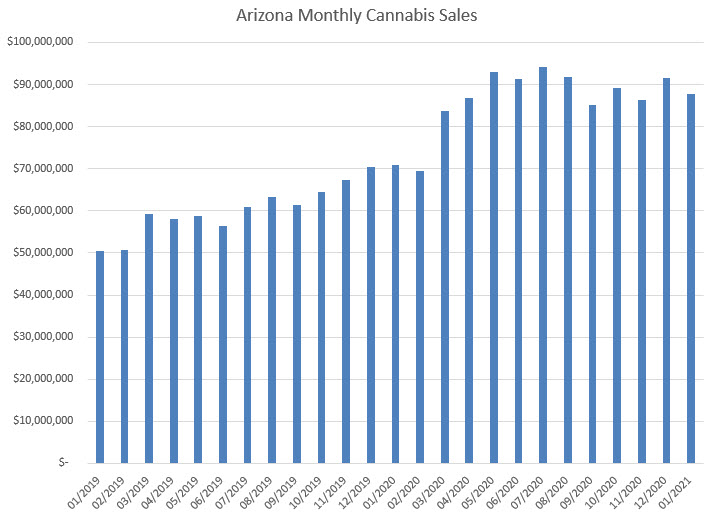 California cannabis sales expanded 28.6% in January to $243.5 million, which was an increase from 25% in December and 24% in November. The sequential decline was 0.4%. Flower sales,which were 35.6% of overall sales, continued to lead growth, expanding 44% during the month, with pre-roll demand strong as well. The pre-roll category, which is more than 10% of the market, grew almost 36% compared to a year ago.

Colorado, the first state to legalize for adult-use, continues to grow at a fast pace, with January sales of $140.9 million increasing 35.5% compared to a year ago as they fell 1.7% sequentially. The growth almost matched the highest level of the past year, when it reached 35.7% in May, and it expanded from 33.7% in December and 31.7% in November. Here, too, flower led the way, expanding 45.3% from a year ago and representing 41.5% of the market.

Nevada represented the slowest growth among any state among those covered by BDSA as it continued to see the market hampered by reduced tourism. January sales of $74.2 million grew 19.1% compared to a year ago as they fell 0.8% from December, but this was below the 23.2% in December and 22.0% in November. Flower sales grew 39.8%. Perhaps reflecting the absence of robust tourism, pre-rolls declined by 12% and ingestibles by 1% from a year ago.

Oregon continues to exhibit astonishingly high growth, with January sales of $100.2 million expanding 48.2% from a year ago, an acceleration from the 42% in December and 32% in November. The market was the only mature market to grow sequentially, gaining 4.4%, Flower sales, at 49%, grew only slightly faster than the market, with concentrates expanding 57.1%. 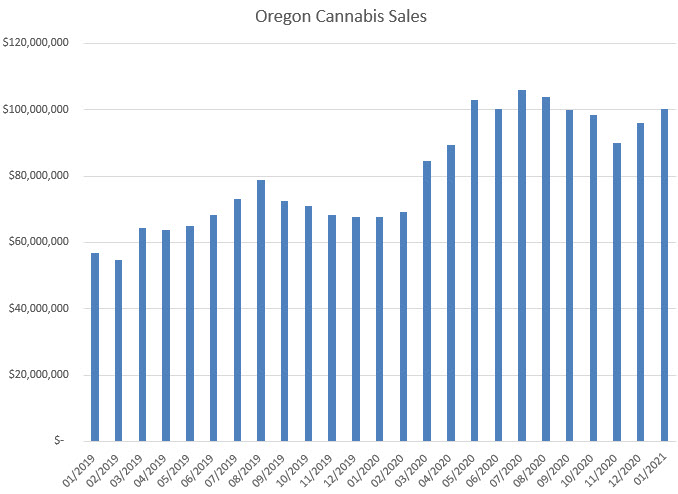 In the newer markets, the rate of growth also accelerated from November. In these states, sequential rates can be important to monitor as well, and they increased marginally in each of the states. Note that we wrote about January data for Illinois based on the state’s data a month ago observing that sales were flat in January compared to December. BDSA provides more comprehensive data than the state, breaking into product types.

At $121.5 million, the combined medical and adult-use markets in Illinois, sales expanded 0.2% sequentially and 94.1% from a year ago as the state celebrated the first anniversary of adult-use sales. Flower grew 181% and represented over 43% of the market. 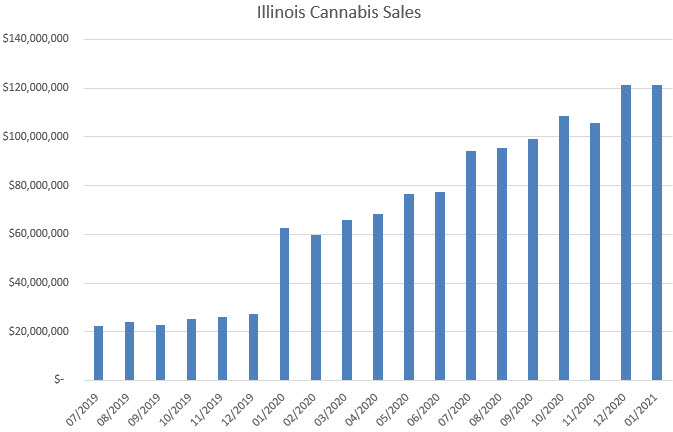 The combined medical and adult-use market in Massachusetts expanded 1.8% sequentially in January, reaching an all-time high of $108.7 million, up 70.9% from a year ago. The growth was modestly slower than in December, when it grew 74.8%, but ahead of the 68.4% annual growth in November. Flower grew at 68.5%, with growth in concentrates at 85.5%.

For readers interested in a deeper look at cannabis markets across these eight states and more, including segmentation by additional product categories, brand and item detail, longer history, and segmentation by product attributes, learn how the BDSA GreenEdge Platform can provide you with unlimited access to the most accurate and actionable data and analysis.