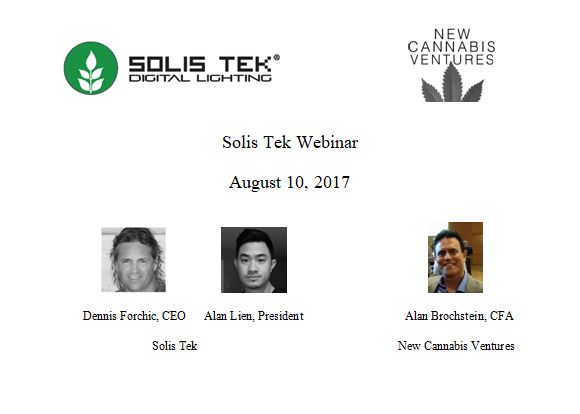 New Cannabis Ventures hosted a webinar with the management team of Solis Tek (OTCQB: SLTK), including CEO Dennis Forchic and co-founder and President Alan Lien on August 10th. The company, which has been focused on providing lighting solutions to the cannabis industry since 2010, launched a nutrients line in 2016 that it developed internally. The company posted sales of $8.6mm in 2016 and $2.9mm in the first quarter of 2017.

In his prepared remarks, CEO Forchic discussed the company’s  positioning as an ancillary company not directly touching the plant and its history as having been built focusing solely on the cannabis industry. President Lien shared an industry outlook and pointed to the company’s recent moves into markets outside of the United States. After a discussion of its lighting products, which make up the vast majority of its sales currently, Forchic explained the company’s nutrients offering, which leverages its current installed customer base and existing distribution channels that serve its 800 clients, most of which are serviced with its in-house sales team.

Readers can watch the presentation and download the slides that Forchic and Lien discussed before taking Q&A. We have provided a summary below of some of the key points as well.

CEO Forchic discussed the overall industry opportunity and how federal illegality has allowed the company to grow without fear of larger companies entering the space. One key point that he made is that Solis Tek is a holding company and that the lighting unit is just one of what could be many divisions over time.

Historically, Solis Tek has been focused exclusively on the U.S. market, but it sees the international market as an opportunity. The company recently began relationships with distributors in Canada and Australia, is in discussions with distributors in Mexico and South America, and is working with a UK distributor with plans to focus on Europe more broadly.

The company’s lighting products, specifically designed for cannabis, include digital ballasts (70% of sales, low 30s gross margin), reflectors (close to 40% gross margin) and lighting systems and bulbs (40-45% gross margin). 85% of sales come from 500 retail hydroponics stores, with the balance coming directly from commercial scale growers, a market segment that is increasing as legalization proliferates and for which Solis Tek is well positioned to meet its needs. Lien explained some of the unique aspects of Solis Tek technology, including ignition control, safety checks, and light spectrum (4 different types of lamps that address the entire life cycle of the plant).

The nutrients division, formerly Grow Solutions, has been renamed Zelda Horticulture. In contrast to lighting equipment, which has a five-year life cycle, nutrients provide recurring revenue from the exact same customers and distribution channels. Nutrients also have higher gross margins than the lighting products at 65-75%. The company has launched Terpenez, which is designed to boost terpene expression, and Neutralizer, which is a natural leaf wash.

Lien discussed the company’s approach to selling into the commercial market. Forchic concluded by discussing the company’s big investment in R&D but historical neglect of marketing. He also discussed potential consolidation in the industry ahead and the company’s management team before taking questions.

Forchic explained the importance of building a strong foundation to position the company to capitalize on industry growth as well as its product portfolio expansion. He said that the company is contemplating acquisitions and would pay for them with some combination of stock, cash and debt (to seller). The ideal products would be adjacent to lighting, like HVAC.

While the company doesn’t currently have patents, it is protected by agreements with its outsourced manufacturers. Lien explained that what drives its success is the relationships that it has with its clients, driven by education and service. Some other questions addressed included the potential size of the nutrients opportunity, potential uplisting, its efforts in Canada (talking to 3 of the 5 largest LPs) and its capital-raising efforts.

To learn more about Solis Tek, please visit the Investor Dashboard that we host on its behalf. Additionally, readers can reach the company by emailing IR@Solis-Tek.com.