The Roland George Investments Program (RGIP), a student-managed portfolio worth $3.5 million at Stetson University in Florida, is investing in the cannabis industry. The program, headed by Dr. K.C. Ma since 2001, began in 1980 with a $500K gift and permits students to manage a real portfolio using fundamental research tools like Bloomberg and Reuters.

At RGIP’s annual public trustee meeting on March 20th, student Michael Goldman pitched the group on investing in the cannabis industry, discussing its appeal and highlighting three stocks, including Aphria (TSX: APH) (OTC: APHQF), Canopy Growth (TSX: WEED) (OTC: TWMJF) and GW Pharma (NASDAQ: GWPH). Canopy Growth and Aphria are two of the leading licensed producers in Canada’s federal medical cannabis program, while GW Pharma is a UK-based biotech company that has commercialized Sativex and will soon submit a New Drug Application (NDA) to the FDA for Epidiolex, which aims to reduce seizures in patients with rare forms of epilepsy that are treatment-resistant.

Goldman also published a 24-page report, which laid out his investment thesis and included “fair values” for the three stocks, including $5.63 for APHQF, $12.52 for TWMJF and $156.87 for GWPH.

The movement from prescription pills to prescription cannabis is real, public sentiment is at an all-time high, and being in the early stages of a monopolistic industry is prime for investing. 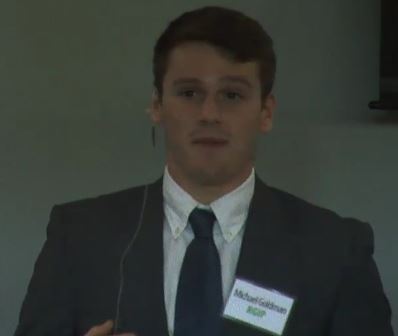 Six of the eight trustees approved Goldman’s cannabis portfolio, and the fund will be investing $100K into the three stocks. The committee also approved an investment in Amazon (NASDAQ: AMZN) while rejecting all of the other ideas presented, including the “Chill Index” comprised of twenty companies in the food, beverage, movies and video game industries, Ferrari (NYSE: RACE), Ulta (NASDAQ: ULTA) and Wingstop (NASDAQ: WING).