Many investors looking to capitalize on cannabis have turned to investment funds or exchange-traded funds (ETFs) over the past two years. The first ETF, the Horizons Life Marijuana Sciences Index ETF (TSX: HMMJ) (OTC: HMLSF) has the longest track record and is the second largest fund in terms of assets (C$629 million as of 12/24, according to the company website). Since inception in April 2017, it has increased in value, with the stock, at C$14.14, closing 41.4% higher than its C$10 IPO price. This understates the total return, as the company has paid some distributions as well, a total of C$1.0287, with another distribution of C$0.2876 ahead for holders of record on 12/31. Through November 30th, the ETF reported a 45.81% since-inception annualized total return, well ahead of its benchmark:

With 2018 almost fully behind us, it’s worth noting that the year-to-date price performance has been -25.3%. If one includes the distributions, the total return has been slightly better. The best comparison given its heavy exposure to the Canadian licensed producers (LPs) is the New Cannabis Ventures Canadian Cannabis LP Index, which has declined 36.1%. An alternative, given its large exposure to the leading LPs, might be the Canadian Cannabis LP Tier 1 Index, which  has decreased just 8.2%. In other words, one could have owned just a handful of the largest Canadian LPs in terms of revenue and substantially outperformed HMMJ.

When HMMJ debuted, we pointed to several deficiencies, some of which it has overcome but others of which remain. Then known as the “Horizons Medical Marijuana Life Sciences ETF”, it included only 16 companies. We pointed to extreme concentration, as 6 names accounted for over 60% of the fund. Here were the 16 companies, including weights for the top 10, which represented 84.4%: 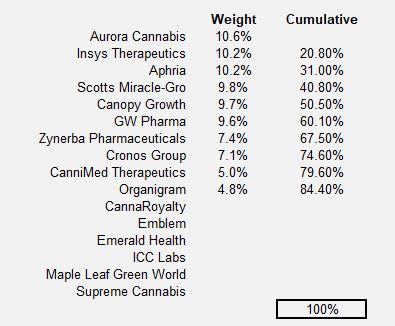 We also noted that there were some odd selections, calling out Insys and Zynerba as well as Scotts Miracle-Gro. Insys, as we shared, was under heavy scrutiny from the government for its marketing practices. It and Zynerba were developing synthetic cannabis drugs and in no way were connected to botanical cannabis. Scotts Miracle-Gro, at the time, had cannabis exposure that represented less than 10% of its overall business. We note that HMMJ has substantially outperformed all three of these names subsequently: 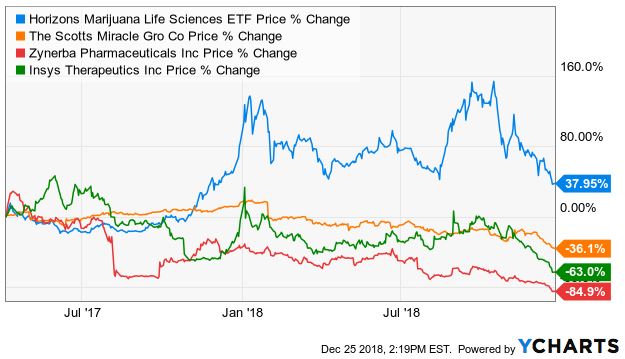 Finally, we warned that HMMJ suffered from a common trait among index funds with its bias towards momentum trading. Quite simply, the better the stock does, the larger its representation in the index. In an industry just getting started and filled with so much uncertainty, it seemed likely that the largest market caps weren’t necessarily the best long-term investments. The performance of Scotts Miracle-Gro and Insys, both of which were among the top four names, illustrates this point. We believed that an equal-weighting approach was a better way to participate in the market. 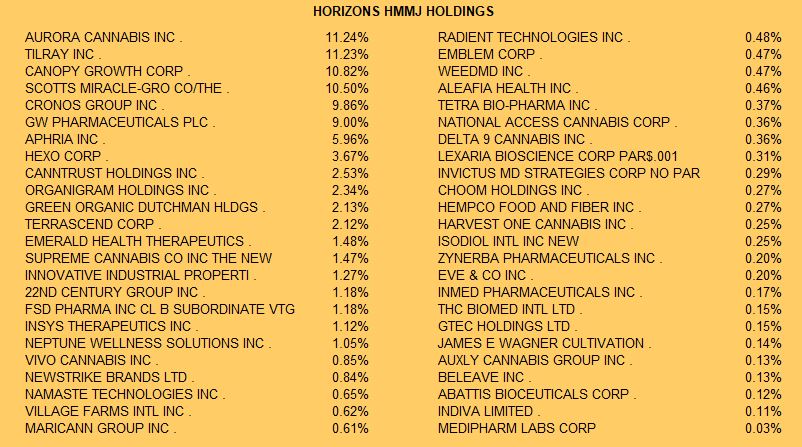 The top 6 names account for 62.6% of the ETF, so there is still extreme concentration. In fact, HMMJ is more concentrated today than it was at inception despite the number of names included in the ETF tripling. We think that investors would be better served to have less concentration. HMMJ continues to include some inappropriate names, including Insys and Zynerba, though the  weightings are now trivial. Scott’s Miracle-Gro remains at greater than 10%, though we note that it has increased its cannabis exposure through M&A.

For those public-company investors looking to participate in the growth of the cannabis industry, we think HMMJ is not an optimal way and continue to suggest that it should be most appealing only to investors with relatively small amounts to allocate to the sector but who desire convenience and diversification. The biggest deficiency beyond the extreme concentration is that it lacks exposure to the U.S. market, which has improved dramatically since HMMJ debuted. HMMJ, which by charter can’t invest in U.S. cannabis companies due to federal illegality, remains a proxy for Canadian LPs, which represent over 74% of the fund. We believe that investors should be easily capable of creating a diversified portfolio of 10-20 names composed of the largest Canadian LPs, the largest American multi-state operators (MSOs) and a few other companies that represent the industry, like GW Pharma and perhaps some ancillary companies. We see no reason that investors should have so much concentration in so few names.

To be fair to Horizons, we don’t believe that the portfolio construction is entirely intentional. Instead, the firm is limited somewhat by liquidity issues among the names. Still, investors are free to pursue investing however they wish, and the current construction, with half the fund at less than 0.5% exposure per name, makes little sense.