Editor’s Note: We published a follow-up to this article on 8/31 in response to the company’s SEC filing that withdrew the shareholder proposal we detailed in this article.

Investing in U.S. publicly-traded cannabis stocks continues to be a hazardous endeavor for the most part. The Cannabis Stock Index has declined by 66% since the end of 2012 despite tremendous progress and growth in the overall cannabis industry.  Measuring from the peak in early 2014, it’s even worse, with the index having lost almost 97% of its value. Quite simply, cannabis stocks, which trade almost entirely on the OTC and not the NYSE or NASDAQ, are more often about penny stocks than about cannabis.

There are a handful of companies that have been around since 2012, and most of them have failed to advance anything but the number of shares outstanding and the number of silly press releases.  One exception has been Terra Tech (OTC: TRTC), the California-based company that recently acquired Blum Oakland and is in the process of opening dispensaries and cultivation and processing facilities in Nevada. More recently, it was able to have an S-3 filing declared effective by the SEC, which is a major accomplishment for any OTC company.

Despite all of the progress, one recent development threatens to derail it. TRTC shareholders are being asked to vote on a proposal on September 26th that would permit the Board of Directors to implement a reverse-split on the common shares and other classes of stock but that would exempt holders of the “B Preferred” shares. B Preferred shares are held by insiders and entitle holders to 5.38 common shares upon conversion and also offer extra voting rights. Here are the holders of the B Preferred: 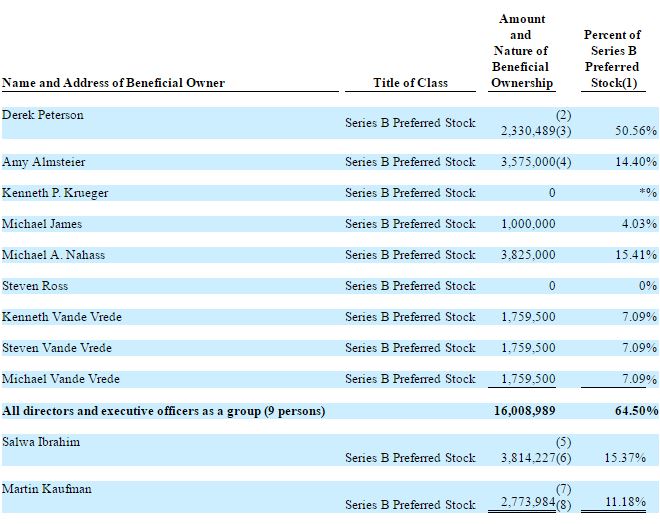 The group at the top represents officers and directors of the company, while Salwa Ibrahim and Martin Kaufman, her husband, are part of Blum Oakland, which was acquired earlier this year.

The company first introduced the idea of treating its common shareholders differently than its B Preferred holders in a preliminary proxy filed in April. While many had hoped that this outrageous proposal would be removed from the final proxy, which was filed in August, the potential amendment to the Amended Articles of Incorporation was still included: 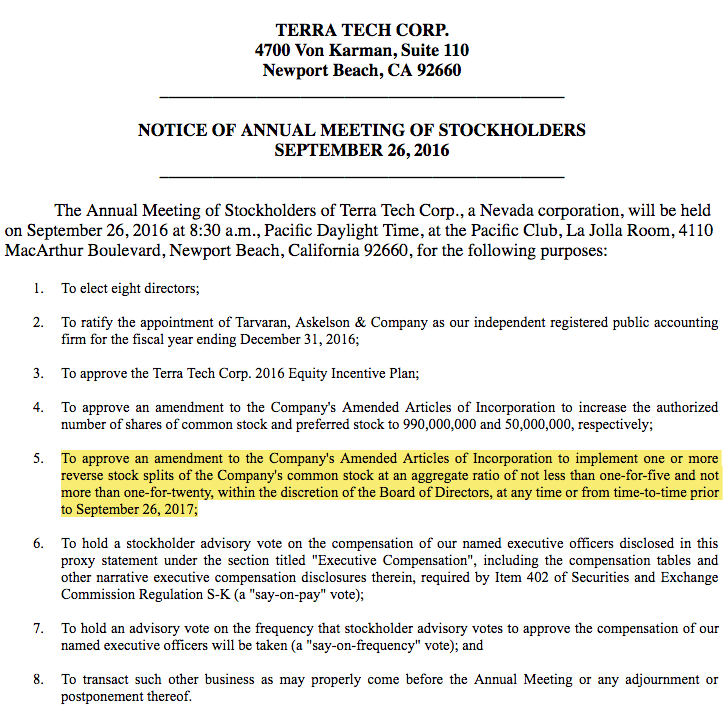 In order to appreciate the potential impact of the exclusion of the Series B from a reverse-split, it’s important to understand the capital structure of the company.  There are 350mm common shares, but the company has other dilutive securities which could add 429,385,696 additional shares:

Adding the common shares to the potential common shares upon conversion or exercise of these securities, there would be approximately 779mm shares. The company, if it conducts a reverse-split, would exchange each share of common stock for a smaller number of shares, ranging from as few as 0.05 (1:20) to as many as 0.20 (1:5). At present, the B Preferred shares, including conversion of the Z Preferred, would represent approximately 215mm of the 779mm shares, or 27.6%. 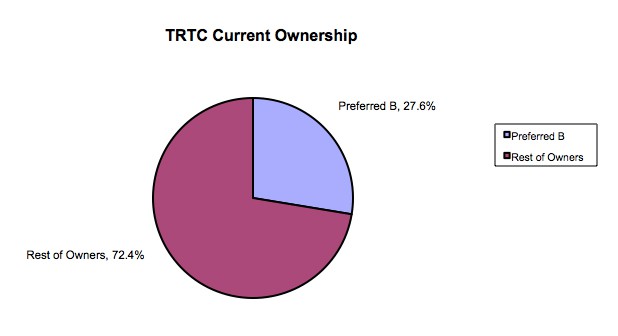 With a 1:5 reverse-split, the 215mm shares would not change, while all other shares would be subject. This would boost the ownership of the B Preferred holders to 65.6%. 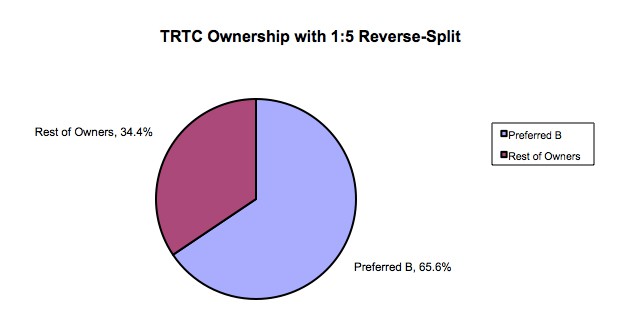 In the event the reverse-split were 1:20, the ownership of the company by the B Preferred holders would soar to 88.4%! 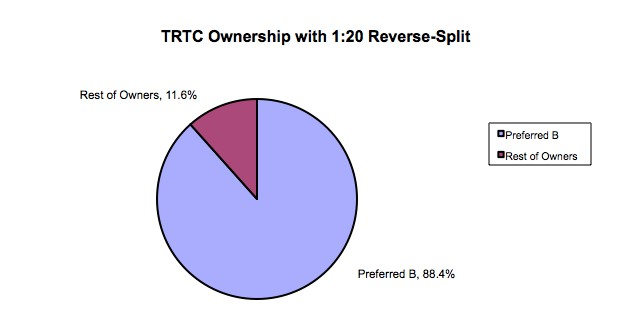 There may be some reason that justifies this seemingly self-serving action, but our repeated efforts to learn directly from the company were ignored, leaving us to conclude that the answer is the obvious one: Insider enrichment.

Should we be surprised? Mike Nahass, who serves as Director, Secretary and Treasurer of TRTC, made his motivation very clear five years ago in a fascinating documentary detailing the early days of the company, Marijuana Gold Rush (at 24:05).

I am in it for the money and only the money. 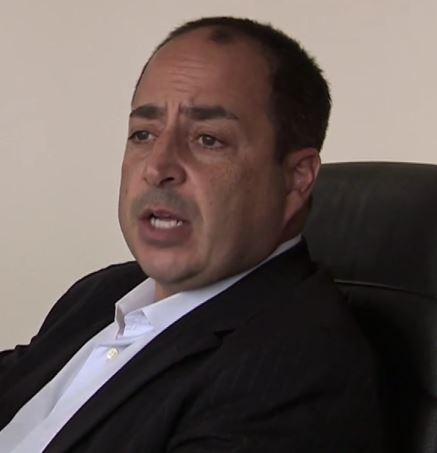 Nahass isn’t alone in selling, though, as other insiders have been unloading common shares as well. Since April 1st, there have been many substantial sales:

Even the newest Independent Director, Kenneth Krueger, who joined the Board of Directors last November and was awarded 350K shares in January, sold 50K shares this month at $0.35123.

The price action over the past year shows that the stock, while down from it peak in April following all the insider selling, is still way up from before the insiders were awarded options in advance of the Blum Oakland deal announcement. 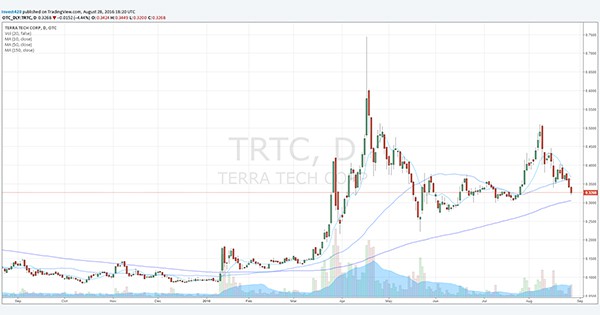 A lot has to happen before the insider enrichment through the reverse-split can actually happen. First, shareholders have to approve the proposal at the annual meeting in late September, but this is a forgone conclusion, as Preferred B shares have 538 votes each, or a total of over 13 billion votes. Then, with the ability to do so, the Board must actually act, and the proposal requires it to do so within a year.  CEO Peterson has repeatedly said that the company would do a reverse-split only in conjunction with a move from the OTC to another exchange, but the Board is not bound by this statement.  In fact, the proxy lists three  rationales:

The next few months could be exciting for TRTC given the potential legalization in November in the two states in which it has cannabis operations, California and Nevada. Additionally, the company could continue its California acquisition strategy, bringing in San Francisco’s Green Door or another entity. With that said, the insiders are about to push through a shareholder proposal that could significantly boost their economic ownership of the company upon a potential reverse-split at the expense of its outside investors.  Already insiders have been aggressively selling common shares while retaining the privileged B Preferred shares over the past five months. For a company that has made much progress on many fronts, this inexplicable corporate behavior is an insult to Terra Tech’s investors and a cautionary story for any investor in a company that is controlled by insiders.