This was a volatile week for cannabis stocks, with large losses that followed big gains. We saw the market running up last week and read reports of excitement over potential passage of SAFE Banking by attachment to the National Defense Authorization Act (NDAA). We think it was wrong of investors to get so excited about potential passage, and we view the sell-off as overly aggressive following Mitch McConnell’s move to remove it.

Although our market has been beaten up, it has been rallying since September 30th, even including the massive pullback last week. We are seeing valuations that look very attractive after a big and brutal bear market in cannabis stocks. We have been expecting investors to become more interested and understand how important a catalyst for change can be. With that said, we think investors were overly optimistic about not only the potential vote but also the implications of the passage of SAFE Banking.

We feel like SAFE Banking would be a major step by the federal government to open the sector to more banking services, but the biggest beneficiaries would not be the large publicly traded multi-state operators. They already have banking! This would help, in our view, the smaller operators, which we think is a good thing for everyone but public company investors. It would be very positive to see federal laws improve, and SAFE Banking could pave the road to better federal regulation.

As we have said before, two big catalysts would be the ability of multi-state operators to trade on a major exchange instead of the OTC Markets and the elimination of 280E taxation. These would widen the investor base and improve profitability and cash flow, respectively. The market surged when President Biden in early October made the pardons, which aren’t that consequential in themselves but that pointed to potential rescheduling or descheduling of cannabis, which is in Schedule 1, which includes the most dangerous drugs except for cocaine, which is Schedule 2.

Our bullishness on the cannabis sector isn’t based on either of these things happening, but we expect that they would boost the market dramatically more than we expect otherwise. Recently, Canopy Growth floated an idea that it would buy American assets and retain its NASDAQ listing. We aren’t so sure that they will succeed with this plan, but, if so, it could open the door to American companies uplisting.

A little over a year ago, we wrote here about Altria’s investment in Cronos Group, suggesting that it could and should buy the company. The price of Cronos Group has dropped 47% since then, while Altria has rallied 3%. We continue to believe that Altria should buy Cronos Group, which trades at a $1.1 billion market cap with cash and short-term investments on 9/30 of $888 million, no debt and tangible book value of $1.17 billion. Altria already owns a big stake, and it has warrants, very much out-of-the-money now, that are expiring in March. Since the deal was announced four years ago, Cronos Group has declined by over 72%, while Altria is down 14%: 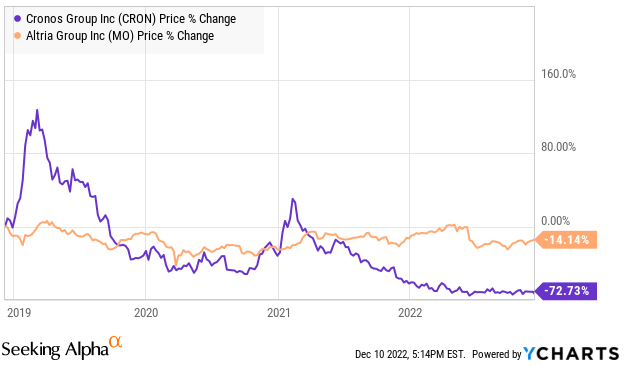 Takeovers could be a big driver in 2023. An LP that is in the 420 Investor model portfolios, Organigram, sold 20% of the company to BAT in early 2021. The stock has declined a lot since then, but it appears to be bottoming technically and seems very inexpensive. Like Cronos Group, Organigram trades at a discount to its tangible book value. It also has a lot of cash and no debt, and it reports positive adjusted EBITDA. BAT stock is up 11% since the deal was announced, but Organigram has lost over 2/3 of its value: 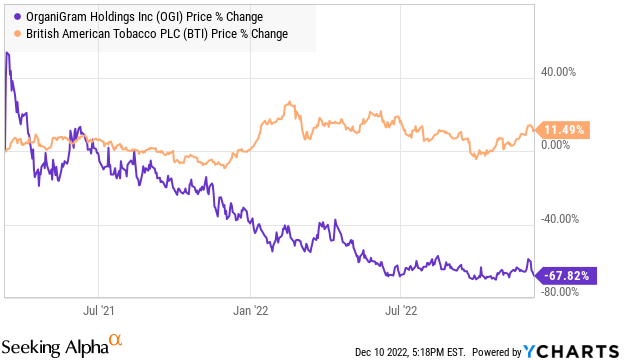 Investors don’t need these two companies to be acquired. They are cheap enough that they could do well even without being bought by their big investor. Big companies can’t acquire federally illegal American cannabis companies yet, but this could change if Canopy Growth is able to complete its pending acquisitions and keep its NASDAQ listing.

We find it very interesting how powerfully the market rallied on what we thought wasn’t that big of an issue, SAFE Banking. We find valuations very attractive and a good technical set-up for investors, and this false move shows us how quickly and how strongly the market could rally on a bigger catalyst. We named two big ones and also a third potential catalyst that is more likely. We think this is a great time for investors to explore the cannabis sector.

Jushi Holdings announced the closing of its previously announced private offering of approximately US$69 million aggregate principal amount of its 12% second lien notes and detached warrants to purchase up to approximately 16 million of the company’s subordinate voting shares at an exercise price of US$2.086. The company has also received subscriptions for an additional US$5 million to be closed at a later date. Jushi also announced that it has amended its existing US$100 million Senior Secured Credit Facility with SunStream Bancorp Inc.

Canopy USA converted CAD$125.5 million in TerrAscend debt to exchangeable shares at CAD$5.10 per share. The deal increases Canopy USA’s conditional ownership in TerrAscend from 12% to 18.2% with the ability to own 23.4% upon the exercise of newly issued warrants. In recent weeks, TerrAscend retired CAD$160 million of debt, reducing annual cash interest expense by CAD$13.5 million. “This transaction, combined with the recent USD$30 million pay down of our Michigan loan, materially improves our balance sheet and reduces annual interest expense by approximately USD$10 million,” said Executive Chairman Jason Wild.