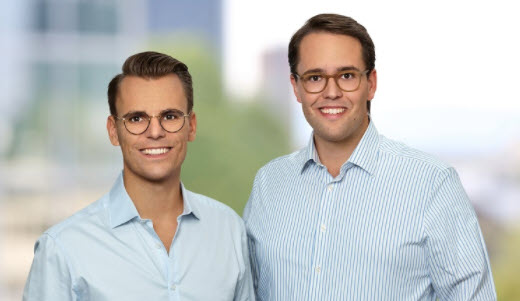 Cansativa GmbH distributes cannabis from international manufacturers and domestic growers in the German cannabis market. Co-founders and brothers Benedikt Sons and Jakob Sons spoke with New Cannabis Ventures about the company’s competitive advantage in the German market, its network of partners and opportunities for further growth. The audio of the entire conversation is available at the end of this written summary.

Prior to entering the cannabis space, Jakob practiced commercial litigation. In his work, he came across the cannabis industry and decided to present the opportunity to Benedikt and their father. Now, he serves as the General Counsel of the company. Benedikt began his career in strategy consulting. When Jakob approached him with an idea in cannabis, he was excited about the emerging market. The company was started in 2017, and Benedikt serves as the Cansativa CEO.

The brothers are joined by other important members of the leadership team, like COO Roland Schneller. Schneller brings his experience in strategy consulting and operations to the team.

The German cannabis market is medical-only and operates with a pharmaceutical framework. Cannabis is marketable as flower, extract and isolate, according to Benedikt. The market is subject to regulatory oversight at the state and federal levels.

The market currently includes approximately 120,000 medical cannabis patients. In 2020, the total market for flower was about nine tons, and that number could grow to more than 20 tons over the next few years, according to Benedikt.

Cansativa imports medical cannabis from around the globe and sells it to pharmacies across Germany. The company has more than 20 suppliers, including companies like Aurora Cannabis, Canopy Growth and Tilray.

The company is also the exclusive partner of the Federal Institute for Drugs and Medical Devices (BfArM). Cansativa won this four-year contract to be the exclusive distributor of medical cannabis from domestic cultivation, a competitive advantage for the company.

Germany has about 20,000 pharmacies, but only 2,000 to 3,000 regularly deal with medical cannabis, according to Benedikt. Cansativa regularly distributes its broad portfolio to thousands of those pharmacies.

In addition to its import and wholesale business operations, Cansativa offers market access services. The Cansativa Services business unit allows customers to use the company’s infrastructure to access the German market. The company has a warehousing facility, clean room and packaging services that abide by EU GMP standards.

The Cansativa team is carefully watching the development of other European cannabis markets, but for now, it is focused on the German market.

Cansativa was funded initially through a small friends and family round. In early 2018, the company had an angel investor help to fund the first products it purchased. Later, Northern Swan, now a part of Cleaver Leaves, invested in the company. This year, the company had its Series A funding round. Thus far, Cansativa has raised a seven-digit amount of capital and deployed a significant amount, according to Benedikt.

The company is well-capitalized for this year. Cansativa is focusing on key growth initiatives, like expanding its Cansativa Services business unit; the company is currently involved in construction at its headquarters. It will also be focusing on educating pharmacies and physicians in Germany and on connecting with more suppliers.

Going forward, Cansativa will be looking for the right partners to help accelerate its growth, according to Benedikt.

Cansativa had almost €3 million in net revenue in its first quarter, and the company expects to exceed €10 million for the whole year. Last year, the company was profitable and cash-flow-positive. This year, growth is Cansativa’s primary goal, which may come with some deficits to the bottom line, according to Benedikt.

Metrics like net revenue growth, number of pharmacy customers, team growth and portfolio breadth help Cansativa track its progress. The company also carefully follows metrics around quality and customer satisfaction, according to Jakob. The company strives to be faster and more reliable than other players in the German market.

With more product available in the German market, the Cansativa team is observing some pressure on margins in the wholesale sector. The company is responding to the challenge by leveraging its market access services to supplement its business offerings.

Understanding the framework of the German market, from its stakeholders to EU GMP regulations, is fundamental to being successful here, according to Benedikt. Opportunities in Germany may evolve as the liberalization of cannabis continues and the market moves toward recreational cannabis. Jakob expects Germany to be the role model for other European markets.

To learn more, visit the Cansativa website. Listen to the entire interview: