After consolidating for seven weeks or so, it looks like the cannabis bull market kicked into high gear ahead of the elections. The New Cannabis Ventures American Cannabis Operator Index, which rose 15.7% this week, has gained 185% since its March low and is down less than 5% in 2020: 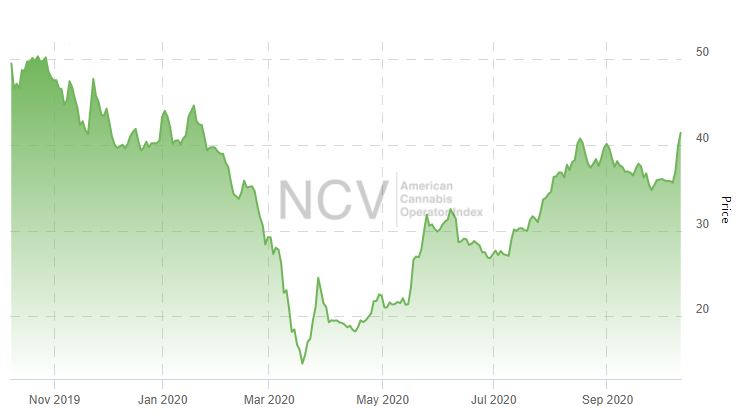 As we have been discussing, investors are likely to become more bullish on the sector as we get closer to the elections for two reasons: state legalization ballot initiatives and a potential change in control of the Senate. Arizona voters failed to approve legalization in 2016, but a victory there would translate quickly into opportunities for several publicly traded MSOs already operating in the market. An even more important state is New Jersey. Not only does it also have several publicly traded MSOs operating there, but, if voters approve adult use, which they are very likely to do, it could also trigger a wave of legalization in the Northeast. Additionally, while they are small states, approvals could take place in traditionally Red states Montana and South Dakota, making it more difficult for Republicans in the Senate to impede reforms or potentially legalization.

Many believe that the Democrats taking control of the Senate would usher in full legalization. We are much less confident that this would be the case, but we certainly believe that it would help engender some reforms that would be enormously helpful, including the ability of consumers to buy cannabis with their credit card of choice, cultivators and processors to access mortgage debt and cannabis operators to list on major exchanges.

Here’s the good news: Even if the outcome of the elections isn’t as robust as 2016, the status quo is looking very promising. The markets may overshoot with optimism heading into the elections and then sell off a bit with even good news or more if the outcome isn’t favorable, but, shortly after the elections, the next big catalyst will kick in: earnings reports.

We think that investors will be excited by this earnings season. First, the revenue and profit growth are likely to be very robust. Second, we expect that more companies will be willing to provide some guidance for 2021. Third, even without the guidance, we anticipate that many investors are going to look more closely at how 2021 could play out for the large operators and like what they see.

Taking a look at the Q3 revenue expectations (in millions and in USD) for the six MSOs that have a market cap in excess of $1 billion (per financial and corporate research platform Sentieo), the projected growth looks quite robust:

Note that acquisitions are playing a role in the sequential growth and annual growth for some of the companies, but the average sequential growth of 33% and annual growth of 139% is likely to capture investor attention. Additionally, all of the companies are expected to increase adjusted EBITDA and the margins. A kicker: Q4 will be a relatively easy comparison for many companies that were impacted negatively by the vaping crisis a year ago during Q4.

One thing that we think has impacted investor sentiment has been the reluctance of some companies to give guidance, but this trend has been changing. Jushi Holdings has already provided guidance for Q3, Q4 and even 2021. Trulieve recently raised guidance for 2020 and provided preliminary guidance for 2021, though this was before its pending acquisitions in Pennsylvania. Curaleaf and TerrAscend have been providing quarterly guidance, and Columbia Care has provided 2020 guidance for its core operations as well as the recently acquired The Green Solution. We expect that more of the MSOs, both these largest ones as well as others, will provide guidance for 2021 now that their operations are scaling, and the outlooks are likely to be very strong due to continued robust growth but also additional operations coming on line as well as the impact of recently completed acquisitions.

Even without 2021 guidance, we expect that with Q4 halfway over when the conference calls will take place, investors are going to take a close look at the current expectations for next year, which we want to share with our readers:

With very strong double-digit projected growth and adjusted EBITDA margins expected to average 32%, again, we believe investors will be quite excited. Note that Trulieve estimates likely don’t include its pending acquisitions in Pennsylvania and that Columbia Care’s pending California acquisition is not likely included as well. We would note as well that we expect many of the MSOs that trade with market caps below $1 billion to exhibit robust growth in revenue and margins too.

Those who have been watching the cannabis market over time understand that these types of catalysts can prove to be “sell-the-news” events. We expect the markets to be quite volatile over the next few weeks, but we think that any sort of potential sell off after the elections could prove to be a good entry ahead of the upcoming earnings season.

This week’s Sunday newsletter is brought to you by NRGene 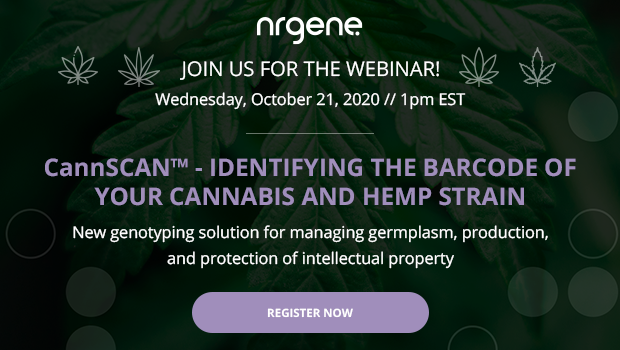 Announcing CannSCAN™, NRGene’s new optimized genotyping solution for cannabis and hemp, that generates the genomic barcode of your strains at a lower cost. Register for the free webinar to see how NRGene developed this unique tool and to demonstrate some of the uses in variety identification, production pipeline and germplasm management.