The Public Cannabis Company Revenue & Income Tracker, managed by New Cannabis Ventures, ranks the top revenue producing cannabis stocks that generate industry sales of more than US$10 million per quarter (C$13.3 million). This data-driven, fact-based tracker will continually update based on new financial filings so that readers can stay up to date. Companies must file with the SEC or SEDAR and be current to be considered for inclusion. Please note that we raised the minimum quarterly revenue several times as the industry has scaled up, including from US$7.5 million in June 2020, from US$5.0 million in October 2019 and from US$2.5 million in May 2019.

38 companies currently qualify for inclusion, with 24 filing in U.S. dollars and 14 in the Canadian currency, which is unchanged from our update a month ago.

In September, only Charlotte’s Web (TSX: CWEB) (OTC: CWBHF) released financials, with the CBD company falling short of estimates and also reducing its outlook for 2020. The company’s Q2 revenue, which had been expected to be $25.9 million, rose 1% sequentially to $21.7 million. The company indicated that while Q3 revenue is expected to increase over Q2, the outlook for the full year is for only flat to modest growth in sales. During October, only MedMen (CSE: MMEN) (OTC: MMNFF) is expected to file financials, while November, which we will preview later this month, will be quite busy. MedMen will report its fiscal Q4 that ended in June, hosting a call on the 15th. According to Sentieo, it is expected to have generated revenue of $42 million, which would be unchanged from a year ago and down 9% from Q3.

Of the companies that report in Canadian dollars, Aurora Cannabis (TSX: ACB) (NYSE: ACB) demonstrated the ongoing challenges to the LPs, while Fire & Flower (TSX: FAF) (OTC: FFLWF), High Tide (CSE: HITI) (OTC: HITIF) and Meta Growth (TSXV: META) (OTC: NACNF) continued to grow sales sequentially and compared to a year ago. Aurora Cannabis saw sales decline 5% during its Q4 ending in June from the prior quarter and 27% from a year ago. Its adjusted operating income included an inventory impairment charge of C$91 million. It reported an adjusted EBITDA of -$C34.6 million, an improvement from its Q3’s -C$50.4 million.

All three retailers advanced revenue during the quarter and saw improvement in profitability. Fire & Flower sales surged to C$28.6 million in its fiscal Q2, 24% above the prior quarter and 158% higher than a year ago, well ahead of expectations for sales of C$24.2 million.  High Tide too beat the expectations of C$22 million during its fiscal Q3, with the C$23.2 million improving 19% sequentially and 180% a year ago. It’s e-commerce property Grasscity was a major contributor to the strength. The company is acquiring Meta Growth, which saw sales slip from a year ago but advance slightly from the prior quarter during its fiscal Q3 ending in May. 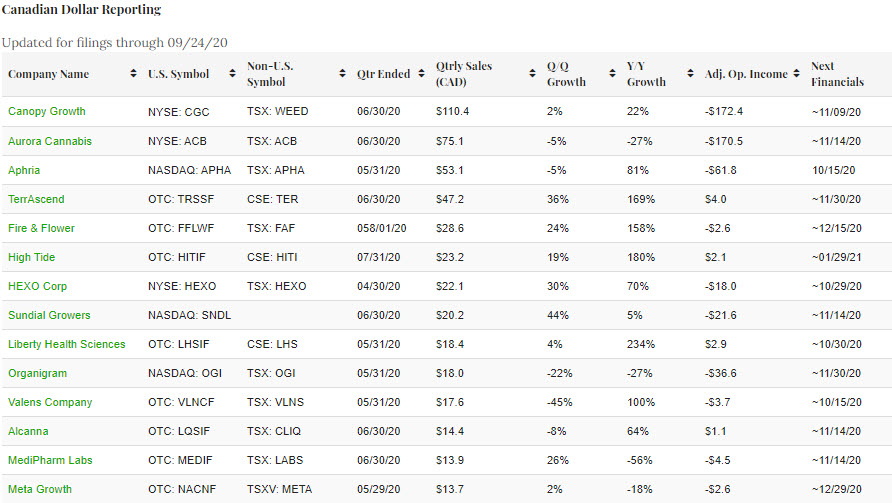 In October, Canadian LPs Aphria (TSX: APHA) (NASDAQ: APHA), HEXO Corp (TSX: HEXO) (NYSE: HEXO) and Valens Company (TSX: VLNS) (OTC: VLNCF) and Florida operator Liberty Health Sciences (CSE: LHS) (OTC: LHSIF) are expected to report. Aphria, which has scheduled its release for the 15th, will be reporting is fiscal Q1 ending in August. The company derives the majority of its revenue outside of the cannabis industry. Overall revenue is expected to increase from C$152 million to C$157 million, according to Sentieo. In Q4, cannabis revenue of C$53.1 million represented 35% of overall net revenue. The company reported that its cannabis segment generated adjusted EBITDA of C$9.4 million during Q4. The adjusted operating loss included write-downs of several assets outside of Canada. HEXO hasn’t yet scheduled a call for it fiscal Q4 ending in July. Analysts expect revenue of C$24.9 million, up 13% sequentially and up 62% from a year ago. Valens hasn’t yet scheduled a call for its fiscal Q3 ending in August. Analysts expect revenue to grow 3% to C$18.2 million, which would represent growth of 10% from a year ago. Liberty Health has no analyst coverage and hasn’t announced when it intends to file. The company doesn’t host conference calls.

For those interested in more information about companies reporting, we publish comprehensive earnings previews and reviews for subscribers at 420 Investor, including for Focus List members Aphria and Liberty Health Sciences.