New Cannabis Ventures has been advertising 420 Investor as a premium subscription service for cannabis investors for several years, and we are very excited to be moving the service to Seeking Alpha after being on Marketfy for more than 9 years.

I informed Benzinga, who owns the Marketfy platform, of the pending change on 11/14 and also told my current subscribers. We are aiming to be live on Seeking Alpha by year-end, but it could be as late as mid-May. We will soon be able to refer you directly for membership of the new 420 Investor, but until then please join the waitlist.

I have been writing investment research articles at Seeking Alpha since early 2007 and have posted over 600 unique ones. I recently published Why Investors Should Warm Up to Cannabis Investing on 10/31, where I shared my bullish outlook. Two weeks later, I wrote about the AdvisorShares Pure US Cannabis ETF not being a great way to take advantage of depressed cannabis stock prices. You can read all of my articles and blogs by clicking the link to my Seeking Alpha author profile.

I am grateful to Seeking Alpha for welcoming me to its Investing Marketplace platform after the tragedy I suffered in mid-April. I was bicycling in a bike lane wearing a helmet when a person hit me and kept driving. I was hospitalized for two months to treat a lot of physical problems. I have been working full-time since mid-June and am doing well. I am getting better physically too.

I would like to thank my subscribers at 420 Investor for the patience they had for me during the troubling times, and I hope to be able to transition each of them to the new Seeking Alpha service from Benzinga’s Marketfy platform. I also look forward to welcoming new members, including those already a part of the Seeking Alpha community and those who aren’t, including potentially any of you who want to stay on top of cannabis stocks with the help of the analyst with the longest full-time running in the sector.

This week’s newsletter is sponsored by Ritchie Bros. Auctioneers 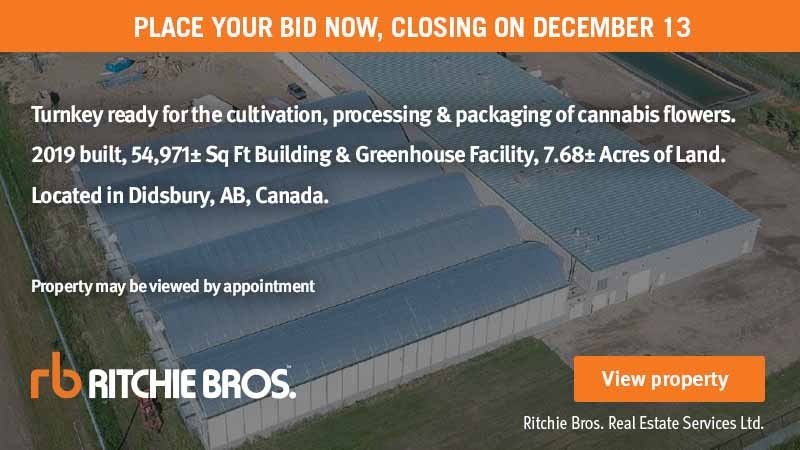 Turnkey ready for the cultivation, processing & packaging of cannabis flowers

With the largest cannabis companies having reported their earnings, the Public Cannabis Company Revenue & Income Tracker, managed by New Cannabis Ventures, found two joining the senior list (iPower and Glass House Brands), while The Parent Company moved from the senior to junior list. To qualify for the senior list, a company must have a minimum quarterly income of US$25 million (C$33.4 million). To qualify for the junior list, it must have a minimum of US$12.5 million (C$16.7 million). When we last updated our list on Oct. 28, 38 companies qualified for inclusion on the senior list – 30 filing in U.S. dollars and eight in Canadian currency. Currently, 31 companies that file in U.S. dollars and eight that file in Canadian dollars are qualifying for the senior lists, a total of now 39. All senior companies have reported their earnings. With December just around the corner, only one junior company is expected to report its earnings.

StateHouse Holdings revenue fell 11% sequentially to $30.8 million, but rose 77% compared with $17.5 million in the same period last year. The growth in total net revenue was primarily due to the acquisitions of Urbn Leaf and Loudpack, which were completed in March and April, respectively, along with the opening of the Harborside branded retail dispensary in the Haight Ashbury neighborhood of San Francisco and the opening of the Urbn Leaf branded retail dispensary in Grossmont in April. “In a short period of time, we successfully executed on the large-scale integration of our business into a strong and unified platform for growth,” said CEO Ed Schmults. He added: “With much of this important combination work complete, we are exiting 2022 as a leading, fully integrated California-focused cannabis company.”