This week, NYSE-listed company Scotts Miracle-Gro reported $303 million quarterly revenue from its cannabis-focused division, Hawthorne Gardening, with profits of $41 million. There are several other companies listed on major exchanges that are doing substantial business with state-legal but federally illegal American cannabis operators, and many others, like banks and power companies, that work with them as well. Yet, as most of our readers are aware, the major exchanges don’t permit American cannabis companies to list due to federal illegality. We think this could change.

Just as there is no law that specifically precludes banks from working with cannabis operators, the major exchanges aren’t restricted from listing them. Instead, it’s a business decision that they have made to avoid risk. Absent any safe harbor, like a new law or at least a memorandum from the federal government, the exchanges are not likely to take a more aggressive approach, as they have too much to lose otherwise. With the Senate potentially changing control, we think it’s time to imagine what rationalization of federal policy might look like, including topics that are often discussed, such as banking and research reforms, but also capital market access, all of which could happen without what would likely be a long and complex task of federal legalization.

If American cannabis companies were able to list on the major exchanges, capital access would expand significantly overnight. For example, retail broker Robinhood, which has grown in popularity, does not offer trading in OTC stocks, which is where all American cannabis operators are forced to list. Additionally, large institutions typically have little interest in buying stocks on the CSE or the OTC. We are also aware that some brokerages currently can make it difficult for individuals to trade cannabis stocks, with higher commissions or order placement only by phone.

One of the catalysts for the bull market in Canadian LP stocks was listing in the United States, which began in early 2018 when Cronos listed on the NASDAQ followed by Canopy Growth listing on the NYSE. Today, most of the largest LPs trade on major American exchanges, typically experiencing substantially higher trading volumes there than in Canada. Two LPs, Sundial and Tilray, don’t trade at all in Canada. The ATM offerings that the LPs have been conducting tend to be executed in the United States as well.

The SAFE Banking Act, which never advanced, didn’t address this topic, but we are hopeful that the next round of legislation will include language about trading exchanges as well as credit card processing. Just as we have argued that many state and local jurisdictions are becoming friendlier to the legal cannabis industry in light of the current economic crisis, we think the federal government, with a unified Congress, could pave the way for rational reforms.

After humble beginnings that started in 2011 when the Stanley brothers first developed what would be the company’s proprietary genetics, Charlotte’s Web has become the most recognized American CBD brand derived from industrial hemp. The company’s strong brand and its e-commerce prowess have enabled it to persevere in a highly competitive market.

Charlotte’s Web has upgraded its management team and has proven its ability to access institutional capital with the secured credit line from J.P Morgan this year. Today, the company’s CBD products, which include oils, gummies, capsules, topicals and canine products, are sold in over 21,000 retail stores. As of Q1, almost 2/3 of its business is now through e-commerce. With the completed acquisition of Abacus Health, the company has expanded to focus on skin conditions and pain relief and has dramatically expanded its presence with food, drug stores and mass retailers 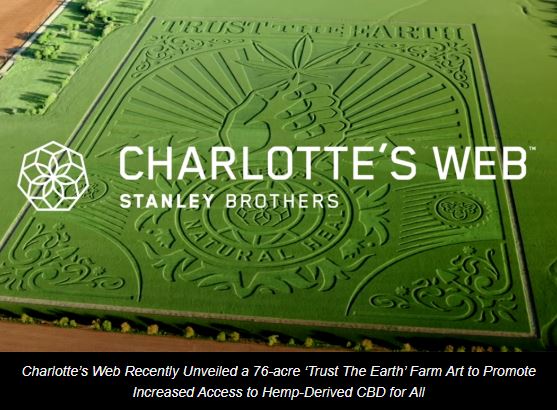 Get up to speed by visiting the Charlotte’s Web Holdings Dashboard that we maintain on their behalf as a client of New Cannabis Ventures. Click the blue Follow Company button in order to stay up to date with their progress.