The Public Cannabis Company Revenue & Income Tracker, managed by New Cannabis Ventures, ranks the top revenue producing cannabis stocks that generate industry sales of more than US$10 million per quarter (C$13.3 million). This data-driven, fact-based tracker will continually update based on new financial filings so that readers can stay up to date. Companies must file with the SEC or SEDAR and be current to be considered for inclusion. Please note that we raised the minimum quarterly revenue several times, including from US$7.5 million in June 2020, from US$5.0 million in October 2019 and from US$2.5 million in May 2019.

34 companies currently qualify for inclusion, with 20 filing in U.S. dollars and 14 in the Canadian currency, which is down from 35 when we reported at the end of June. In the U.S., we removed  C21 Investments (CSE: CXXI) (OTC: CXXIF), which fell below the threshold. Some companies have taken advantage of revised filing deadlines that have been extended due to the pandemic, and we expect to see some delays as we enter the calendar Q2 reporting season. We also expect to add a few names to the rankings.

During July, 4Front Ventures (CSE: FFNT) (OTC: FFNTF) filed its Q1 financials for the quarter ending March 31,  KushCo Holdings (OTC: KSHB) reported its results for its fiscal Q3 ending in May and Scotts Miracle-Gro (NYSE: SMG) provided financials for its fiscal Q3 ending in June. 4Front experienced 8% sequential growth in revenue, with its adjusted operating loss improving to -$6 million from -$15.6 million in Q4. KushCo experienced a 26% sequential decline in revenue as it transitioned its business model to be focused less on California customers and more on multi-state operators. Despite the revenue decline, it decreased its operating loss and saw gross margin improvement and improved operating expenses. The company guided for revenue to improve to $24-26 million in its Q4, with adjusted EBITDA expected to be about break-even. Scotts Miracle-Gro experienced 32% sequential growth in its Hawthorne Gardening division that is focused on the cannabis industry. The company, which cited strength in California as well as emerging markets including Michigan and Oklahoma, expects the unit to deliver annual sales growth of 55-60% after the 72% growth in its Q3. 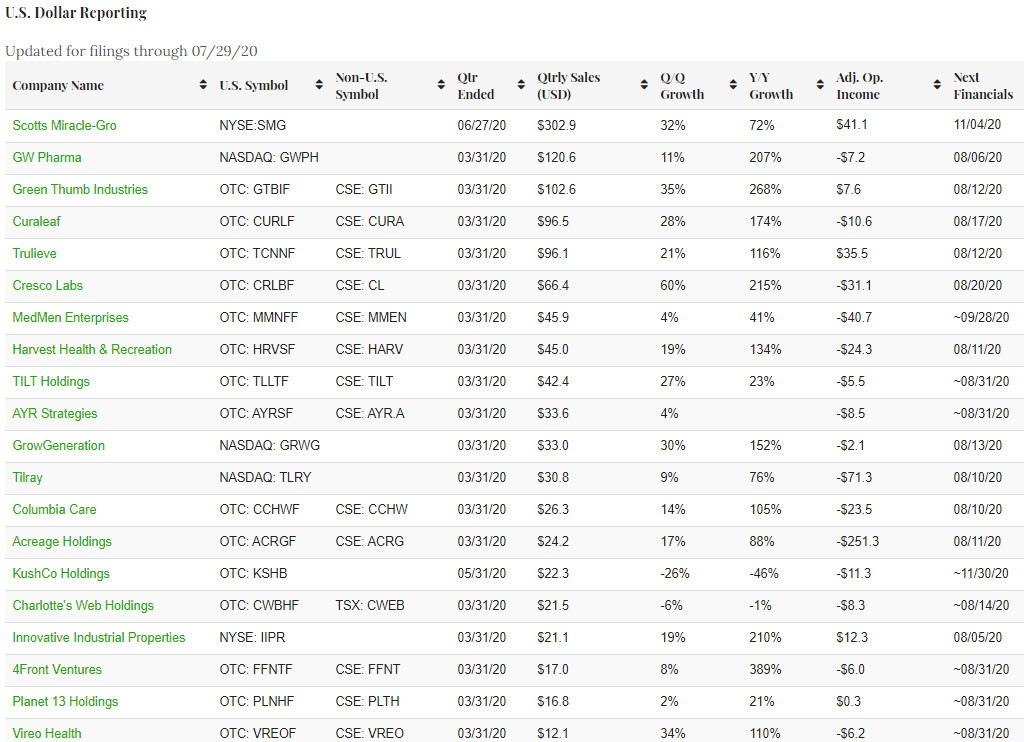 GW Pharma, according to Sentieo, is expected to see revenue similar to the Q1 revenue of $120 million, with 13 analysts estimating within a range of $112-129 million. The company has exceeded the consensus in each of the past five quarters.

Green Thumb Industries was the first MSO to surpass $100 million, but it is likely to have been surpassed by Curaleaf during Q2. Analysts expect GTI to see revenue increase only slightly, with a consensus of $103 million ($94-115 million), while Curaleaf is expected to have generated revenue of $109 million, up 13% from Q1. The company will be reporting its first full quarter since acquiring the Select brand. Profit-leader Trulieve could surpass GTI as well, as analysts expect it to see 10% growth over Q1 to $106 million ($100-117 million). Its adjusted operating income is expected to improve to $39 million.

For those interested in more information about companies reporting, we publish comprehensive earnings previews and reviews for subscribers at 420 Investor on many of these companies.

Of the companies that report in Canadian dollars, Aphria (TSX: APHA) (NASDAQ: APHA), Liberty Health Sciences (CSE: LHS) (OTC: LHSIF), Organigram (TSX: OGI) (NASDAQ: OGI) and Valens Company (TSX: VLNS) (OTC: VLNCF) provided financial updates. Aphria’s  cannabis revenue slipped in its fiscal Q4 ending in May as its wholesale sales declined by more than the increase in adult-use sales.  The company’s adjusted operating loss included C$64 million in asset impairments. Otherwise it would have posted positive income. Liberty Health Sciences continued to advance its revenue from the Florida market, growing 4% during its fiscal Q1 ending in May, with the company reporting an almost $3 million adjusted operating profit. Organigram, like Aphria, saw wholesale revenue from its Q2 fail to recur, leading to fiscal Q3 revenue for the quarter ending in May to decline by 22%. It’s operating loss included one-time charges as well. Valens doubled its revenue in its fiscal Q2 compared to a year ago for the quarter ending in May, but sales shrank sharply from Q1. 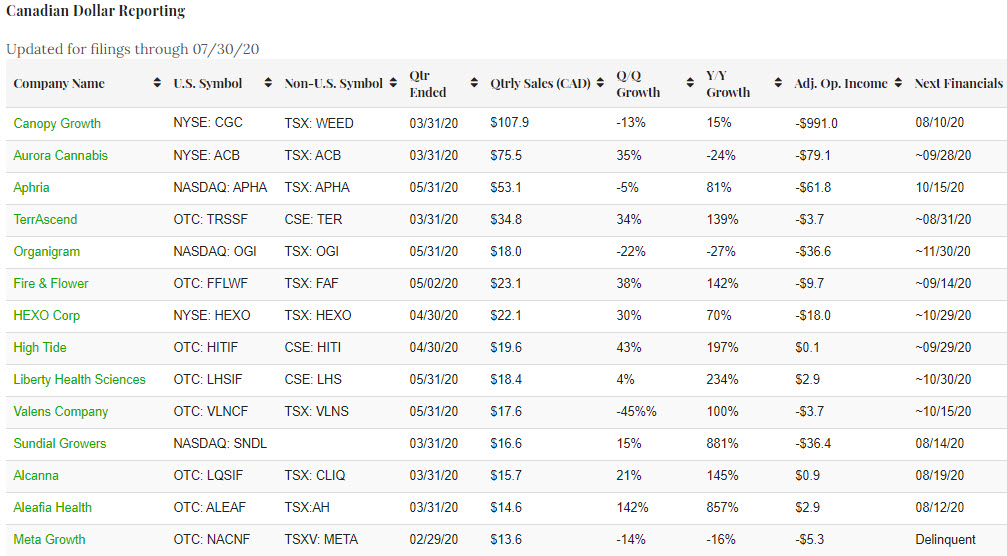 During the first half of August, Canopy Growth, the revenue leader in Canada, will report its fiscal Q1 financials on August 10th. According to Sentieo, analysts project revenue to decline 13% from Q4 to C$93.4 million, which would represent growth of about 3% from a year ago. They also expect the adjusted operating loss to improve from Q4, which included write-downs, to about C$163 million. Canopy’s revenue is quite diversified, with Q4 sales into the the provincial adult-use market of almost C$30 million, retail store sales of C$13 million, medical sales of C$15 million, international medical revenue of almost $C21 million and the balance in ancillary sales that amounted to approximately C$30 million in Q4.