As a result of our raising the minimum cannabis-related revenue for consideration, 31 companies currently qualify for inclusion, with 19 filing in U.S dollars and 12 in the Canadian currency. Since our last report in mid-April, we have added TILT Holdings (CSE: TILT) (OTC: SVVTF) and Vireo Health (CSE: VREO) (OTC: VREOF), both of which report in U.S. dollars. With the upcoming filing season, we expect some companies that dropped off could rejoin, and we continue to see new companies go public, like Greenlane (NASDAQ: GNLN), which we expect to include once quarterly information is available.

Several of the largest companies reported in the back half of April, and we have noted the additions as well. One trend we have observed is that most of the companies are now providing pro forma revenue as well, which is an attempt to more accurately portray the operations by taking into account the results of closed and pending acquisitions as the multi-state operator (MSO) space rapidly consolidates. Our rankings include only actual reported revenue. 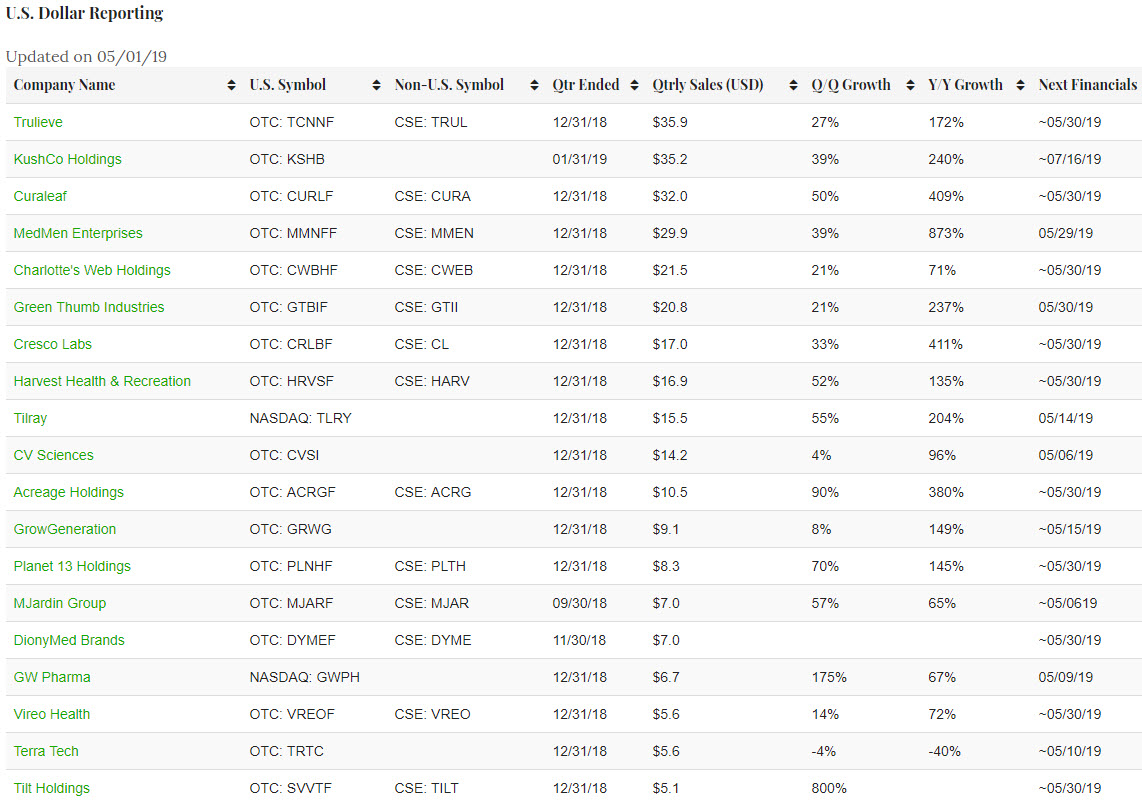 Of the companies that report in Canadian dollars and that generated the equivalent of more than US$10 million, Organigram(TSXV: OGI) (OTC: OGRMF), Aphria (TSX: APHA) (NYSE: APHA) and National Access Cannabis (TSXV: META) (OTC: NACNF) reported financials in the back part of April. The Organigram report for its fiscal Q2 allowed it to advance ahead of Aphria, which reported its fiscal Q3. Note that the overall revenue generated by Aphria, which is boosted by non-cannabis revenue, was much higher. Its cannabis-related revenue actually declined from its Q2 levels. The vast majority of the revenue from National Access is related to its retail cannabis stores.

During May, we expect reports from six of these companies. According to Sentieo, Aurora Cannabis (TSX: ACB) (NYSE: ACB) is expected to report Q3 sales of C$79.7 million, though we note that the company has a small amount of non-cannabis revenue. Canopy Growth (TSX: WEED) (NYSE: CGC), which has a March fiscal year-end, has indicated it expects to report its Q4 in mid-June. CannTrust (TSX: TRST) (NYSE: CTST) has already pre-announced its Q1, projecting sales of approximately C$17 million. Alcanna (TSX: CLIQ) (OTC: LQSIF) has scheduled its call for May 9th.