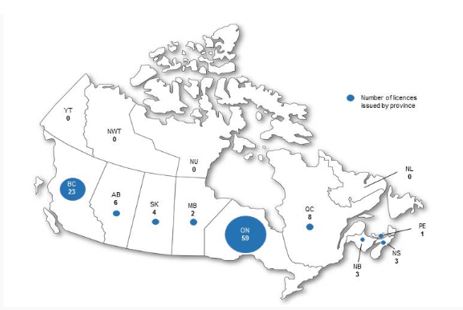 As of June 8th, there were 33 publicly-traded LPs, all of which are included in the Canadian Cannabis LP Index, which is down 10% so far in 2018 but has increased by over 803% since its inception on 12/31/15. Several LPs are in the process of going public, including two expected to begin trading this week, 48North and James E. Wagner Cultivation Corporation (JWC).

48North, the parent of Delshen Therapeutics in Northern Ontario, has a licensed indoor facility of 40K sq. ft.that it projects can produce 2.5 million grams annually, though it isn’t yet approved for selling. It has licensed genetics from Maripharm B.V. in the Netherlands and is evaluating an expansion on its 800 acres in Kirkland Lake to build a 200K sq. ft. facility in two phases that would add 40 million grams to its annual production capacity. We interviewed CEO Alison Gordon in April, where she discussed the company and its focus on the development of a health and wellness brand for women. The company is expected to begin trading on the TSX Venture with the symbol “NRTH” this week. Investors seeking more information can consult the filing statement.

JWC, which is licensed to cultivate and to sell, is based in Ontario and produces aeroponically grown cannabis, using its GrowthStorm cultivation platform. Its current facility is 15K sq. ft. and produces 1.5 million grams annually in 7 grow rooms, and the company is targeting 28.5 million grams in its second facility under development, a 345K sq. ft. retrofit that it expects to complete in the second quarter of 2019. The company has a strategic relationship with Canopy Growth through its CraftGrow and Tweed Main Street programs, its genetics and its extraction infrastructure and Canopy Rivers, which provides it with capital and owns 13.7% of the company on a fully-diluted basis. The company is expected to begin trading on the TSX Venture with the symbol “JWCA” on June 11th. Investors seeking more information can consult the filing statement.