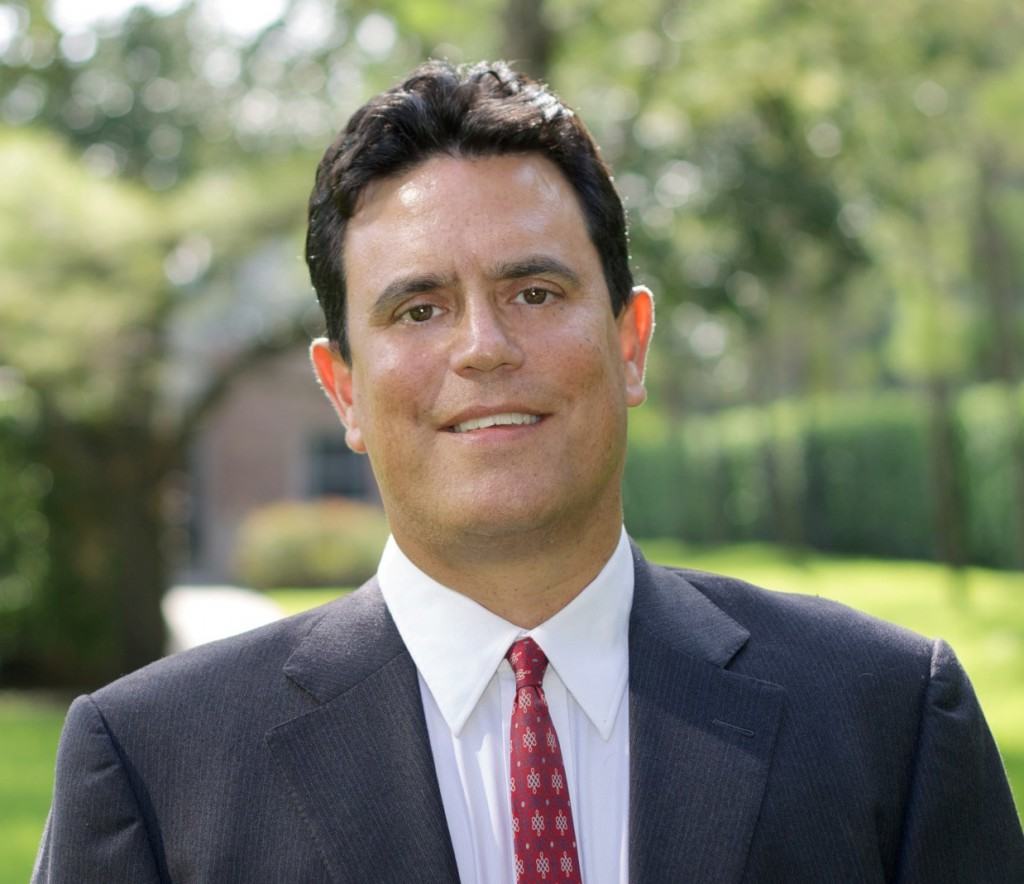 Despite a rapidly growing underlying industry, investors in the publicly-traded cannabis stocks have been dodging landmines for several years now, with few companies producing solid returns so far and many flaming out completely. The companies, for the most part, don’t come close to matching the industry, with the vast majority of the 360 or so that I track appearing to be nothing more than opportunists trying to cash in on the popularity of the industry with traders and investors rather than actually building real businesses. While public company investors wait out the arrival of companies that better reflect the promise of the industry, there is one area that not only offers promise but that is actually delivering solid growth in both sales and share prices: Canada. Here are three reasons why investors should pay attention:

Canada is the most progressive G-7 country with respect to cannabis. The country’s medical cannabis program, MMPR, launched 26 months ago with several flaws, many of which remain, but the federally legal program allows the companies, known as licensed producers (LPs) to operate without facing many of the issues with which state-legal U.S. companies that remain federally illegal must contend, including banking issues as well as the inability to scale due to restrictions on interstate commerce. The program has experienced significant growth that is accelerating, though, at about 50K patients currently, is just a fraction of its potential, which could exceed 400K in the next few years.

While the industry’s fundamentals are solid based just upon the medical cannabis opportunity, the country is likely to legalize cannabis for adult use in 2017. New PM Justin Trudeau campaigned with a promise to legalize it, and he continues to adamantly endorse legalization in an effort to protect children and to wipe out the black market. He has appointed cabinet ministers that are on board and has created a task force that is aiming to introduce legislation in less than a year.  With 35mm residents, Canada is a huge market that trails California only slightly in residents, and the conversion of a robust black and grey market to a legal market affords the LPs a huge opportunity in the coming years. Additionally, the Canadian companies are positioned to expand into other countries adopting medical cannabis programs or embracing legalization. Health Canada has currently licensed 26 companies, some with multiple licenses, listed here. Eight of these companies trade publicly, while several are owned partially (and one completely) by another publicly-traded company.

In stark contrast to both public and even private companies in the U.S., which struggle to raise capital, the Canadian LPs have been able to do so since the elections last October with considerable ease, with some of the companies tapping the market more than once. Several of the LPs have been able to borrow from Farm Credit Canada, Canada’s largest agricultural term lender, at very attractive interest rates. OrganiGram was able to negotiate a $1mm credit related to job creation from the province of New Brunswick to help finance an expansion. Here is the list of all of the capital markets transactions by LPs since the elections on 10/19:

Note that each of these stocks is trading at or above the price of the offerings. The LPs are raising war chests to further separate themselves from their peers and to prepare for legalization. I have written about the short-term inventory glut, but the country has way too little capacity for a fully legal system. The LPs are betting, most likely correctly, that the government is probably going to allow existing producers to add capacity in the near future.

Institutional investors from both Canada and the U.S. have invested to some degree in the sector, but the recent news from Canopy Growth that it will be moving from the TSX Venture to the Toronto Stock Exchange paves the way for even more institutional participation. Further, several brokerage firms in Canada are providing research on the companies in the sector. The bottom-line is that the clearer regulatory framework, the dynamics of the rapidly growing medical cannabis market and the prospects for legalization are allowing a handful of companies to access capital at reasonable terms, a distinct advantage over U.S. cannabis companies, particularly the public ones.

Prices have pulled back in front of catalysts ahead

At the end of 2015, I created the 420 Investor Canadian Cannabis Index in order to track the performance of the sector. Through June 10th, the index return year-to-date has been -3.0%. This return is in local currency and is slightly positive when converted to U.S. dollars given the strength of the Canadian dollar, which is up over 8% YTD. While the average stock is slightly lower in 2016, a quick perusal of the nine publicly-traded LP stocks shows that the performance has varied tremendously from company to company. 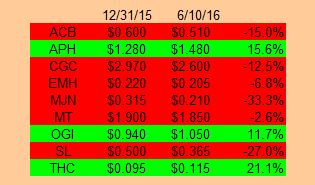 As is usually the case in any sort of investment theme, not all companies will capitalize on the opportunity, while some will prove superior to their peers. At the same time as I created the index, I also began sharing a model portfolio in order to help my subscribers allocate within the sector.  Through June 10th, the 420 Investor Canadian Cannabis Model Portfolio, which is adjusted only once a month, is up 7.7%, 10.7% better than the corresponding index.

Here are the charts of each of these stocks with a brief description of the company: 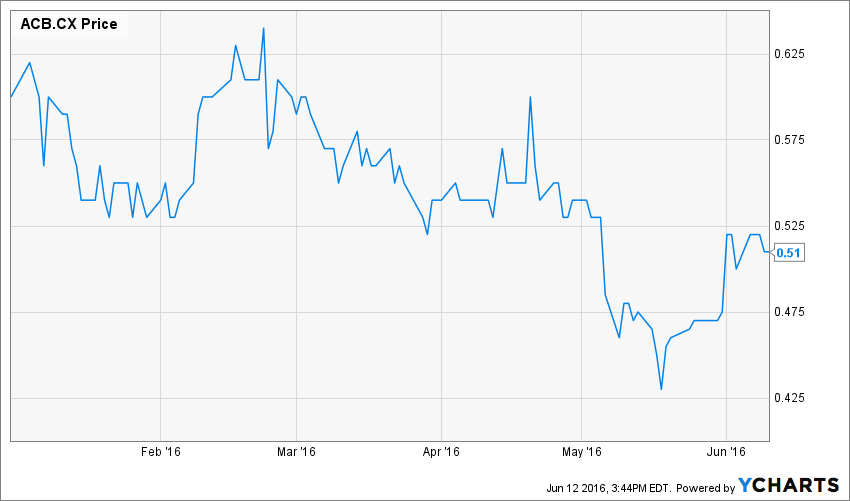 Aurora Cannabis (CSE:ACB) (OTC:ACBFF) is the only LP based in Alberta, and it has rapidly added over 3500 patients since gaining its sales license earlier last November. ACBFF is an actual U.S. listing. 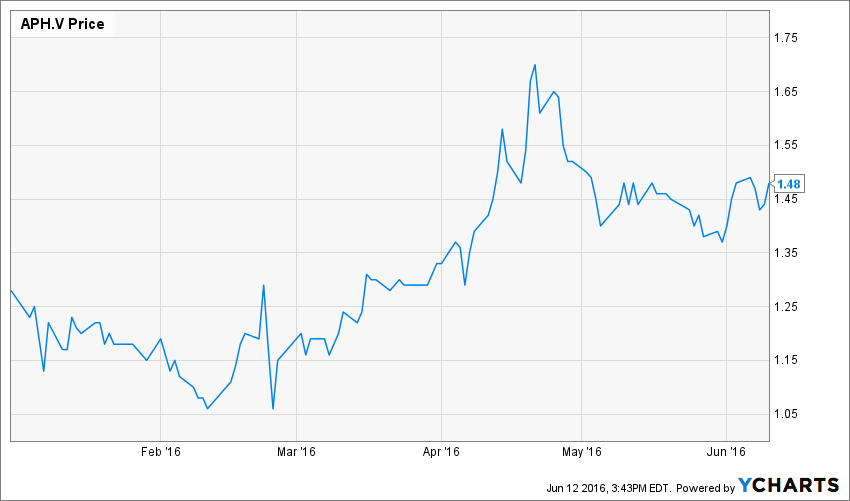 Aphria (TSXV:APH) (OTC:APHQF), which grows in a greenhouse, has quickly generated among the highest revenues in the industry, serving patients directly as well as acting as a wholesaler to other LPs. 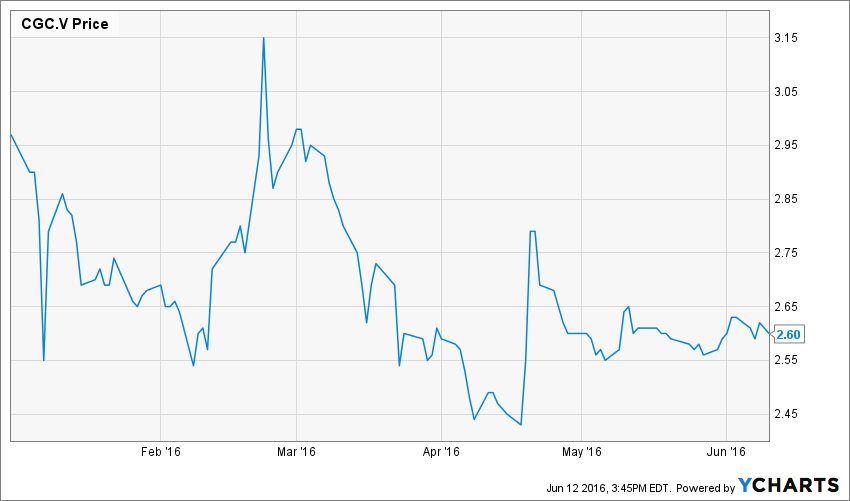 Canopy Growth (TSXV:CGC) (OTC:TWMJF) is the clearly established initial leader, operating Bedrocan and Tweed brands across indoor and greenhouse facilities and maintaining a market share of 20-25%. 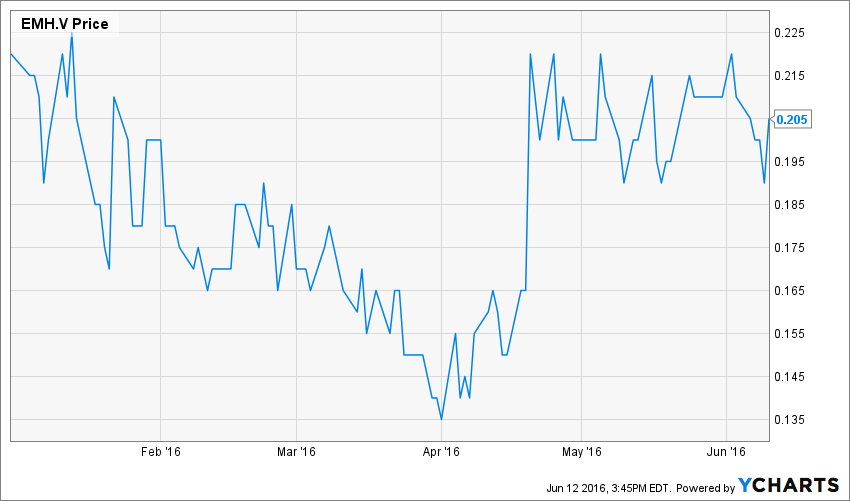 Emerald Health (TSXV:EMH) (OTC:THBQF) has struggled, with a new management team taking over in 2015. 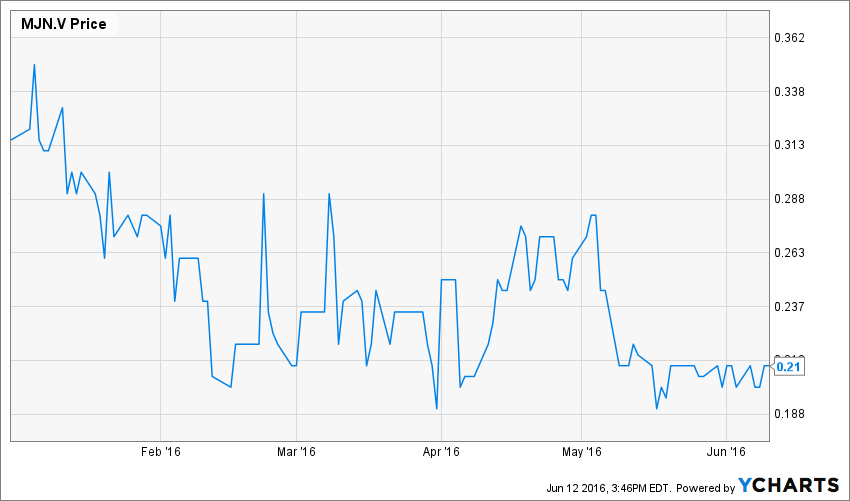 PharmaCan Capital (TSXV:MJN) (OTC:PRMCF) is a merchant bank that owns one LP, In the Zone, and has stakes in several others, including Peace Naturals, Whistler, Hydropothecary, and ABcann as well as a few other MMPR applicants. 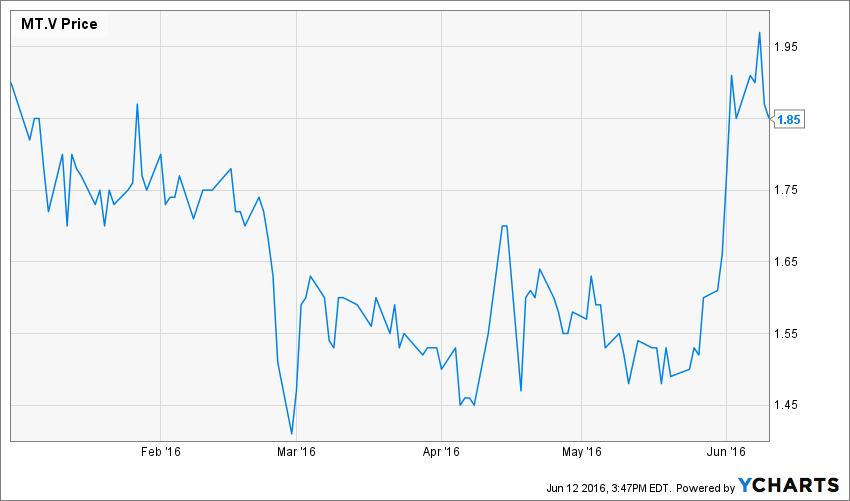 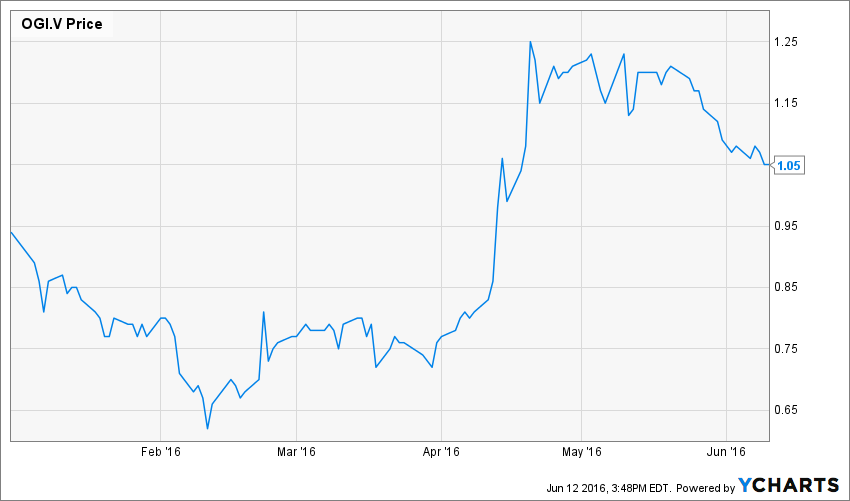 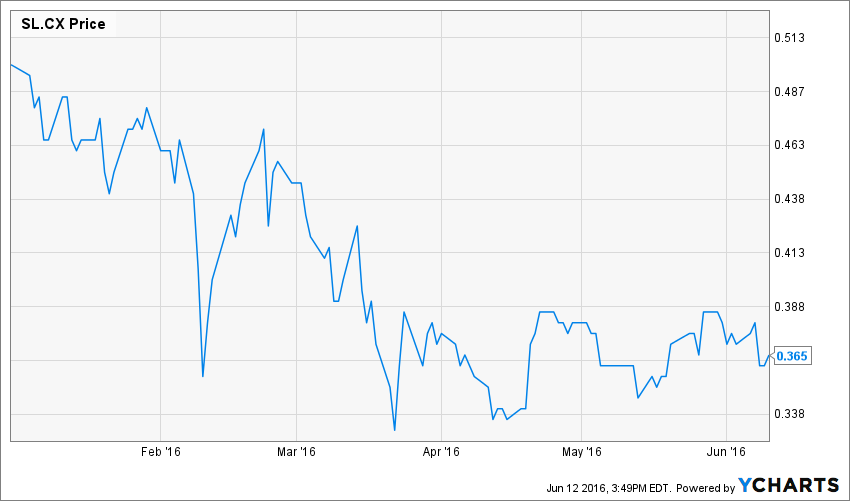 Supreme Pharma (CSE:SL) (OTC:SPRWF) isn’t yet licensed to sell, but it began cultivating in its 7-acre hybrid greenhouse in Ontario earlier this year and plans to sell cannabis and clones to other LPs beginning later this year. SPRWF is an actual U.S. listing. 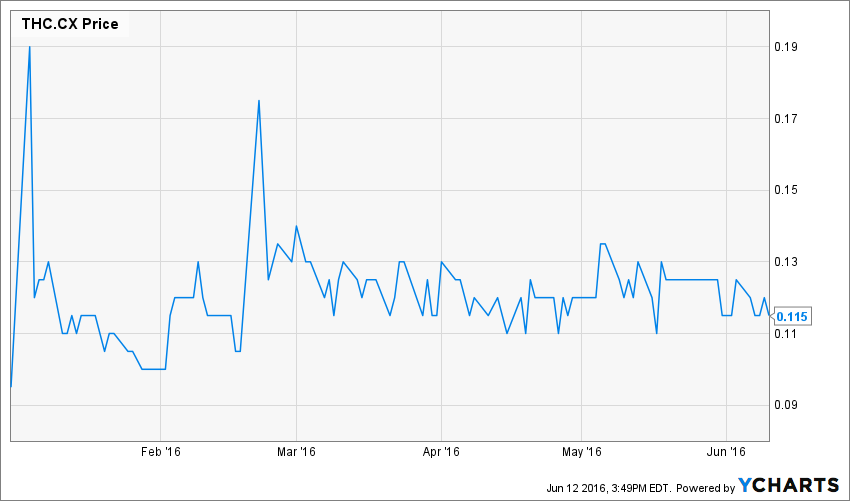 THC Biomed (CSE:THC) (OTC:THCBF) received its license to cultivate in February. After a quick spike in price, the stock returned to its pre-announcement levels.

Most of the stocks peaked in April, as Minister of Health Jane Philpott sparked the market with her comments at the UN meeting in NYC that Canada will “introduce legislation in spring 2017 that ensures we keep marijuana out of the hands of children and profits out of the hands of criminals.” This proved to be a sell-the-news event, as the market began to focus on some of the uncertainty surrounding the timeline and what the actual system may look like.

Over the balance of 2016, there will be several key catalysts. First, Canopy Growth will be reporting its Q4 (FY ending in March) results in June, while Mettrum will be doing the same possibly in June but certainly by the end of July. These are two of the largest LPs in terms of sales. Mettrum, based on public comments, is likely to demonstrate significant sales of extracts, which it began marketing early in the year. These companies will also report their Q1 results by the end of August, which will be a critical month. One of the overhangs, potentially, for the sector has been the revamping that will be announced in August in response to the Allard Case decision in February. It is a given that home-grow will be permitted going forward, but there is some uncertainty regarding other potential changes. Whatever transpires, the lack of uncertainty is likely to improve sentiment, and the likelihood is that the changes aren’t to the detriment of the LPs. Finally, there is likely to be a number of announcements from the legalization task force as we head into 2017, when the legislation to legalize will be introduced.

The opportunity for investors in Canada seems to be much greater than in the U.S., especially for those investing in the publicly-traded stocks.  I didn’t address valuation, which is something I discuss extensively with subscribers at 420 Investor, but the argument I made late last year holds true still in my view. I suggested that the entire universe of MMPR LPs was valued less than biotech GW Pharma (NASDAQ:GWPH), which remains the case. While there is uncertainty on many fronts, such as the timing of legalization, the growth of the MMPR market (and the types of products permitted for sale), how the government will deal with the black market and the grey market, how distribution will take place in the future and how many suppliers will ultimate be permitted, many of the stocks seem reasonably valued if the expected growth plays out.

In my view, investors should definitely pay attention to the Canadian cannabis sector. At 420 Investor, I spend a lot of time focusing on the opportunities in Canada, diving into the fundamentals, risks and catalysts. The monthly 420 Investor Newsletter includes access to the index and the model portfolio, while subscribers to 420 Investor get more extensive coverage of the Canadian market as well as the U.S. market.