The Public Cannabis Company Revenue & Income Tracker, managed by New Cannabis Ventures, ranks the top revenue producing cannabis stocks that generate industry sales of more than US$12.5 million per quarter (C$15.9 million). This data-driven, fact-based tracker will continually update based on new financial filings so that readers can stay up to date. Companies must file with the SEC or SEDAR and be current to be considered for inclusion. Please note that we have raised the minimum quarterly revenue several times as the industry has scaled up, including from US$10.0 million in November 2020, US$7.5 million in June 2020, US$5.0 million in October 2019 and US$2.5 million in May 2019.

38 companies currently qualify for inclusion, with 27 filing in U.S. dollars and 11 in the Canadian currency, which is up by one from our update a few weeks ago. Lowell Farms (CSE: LOWL) (OTC: LOWLF failed to meet the minimum after its revenue declined during Q4. We continue to expect several additional companies to qualify in the future, including some newly public companies.

Curaleaf (CSE: CURA) (OTC: CURLF), Green Thumb Industries (CSE: GTII) (OTC: GTBIF), Columbia Care (CSE: CCHW) (NEO: CCHW) (OTC: CCHWF) and AYR Wellness (CSE: AYR.A) (OTC: AYRWF) were among the larger companies to report in the first part of March. Curaleaf Q4 revenue fell slightly short of expectations, but the company was ahead on adjusted EBITDA. It provided full-year 2021 guidance for revenue to be $1.2-1.3 billion with an adjusted EBIDTA margin near 30%. GTI’s Q4 results, which represented entirely organic growth, were well ahead of expectations for both revenue and adjusted EBITDA. Columbia Care, like Curaleaf, derived substantial benefit from recent acquisitions. It provided 2021 pro forma revenue guidance of $500-530 million, with adjusted EBITDA projected to be $95-105 million. This outlook includes its Ohio operations, which aren’t consolidated, and assumes a 7/1 closing of the Green Leaf Medical acquisition. Ayr Wellness also reported an entirely organic quarter, but that will change dramatically ahead, as the company in in the middle of an expansion from two states to seven. It provided 2022 revenue guidance of $725 million, with adjusted EBITDA projected to be $325 million. 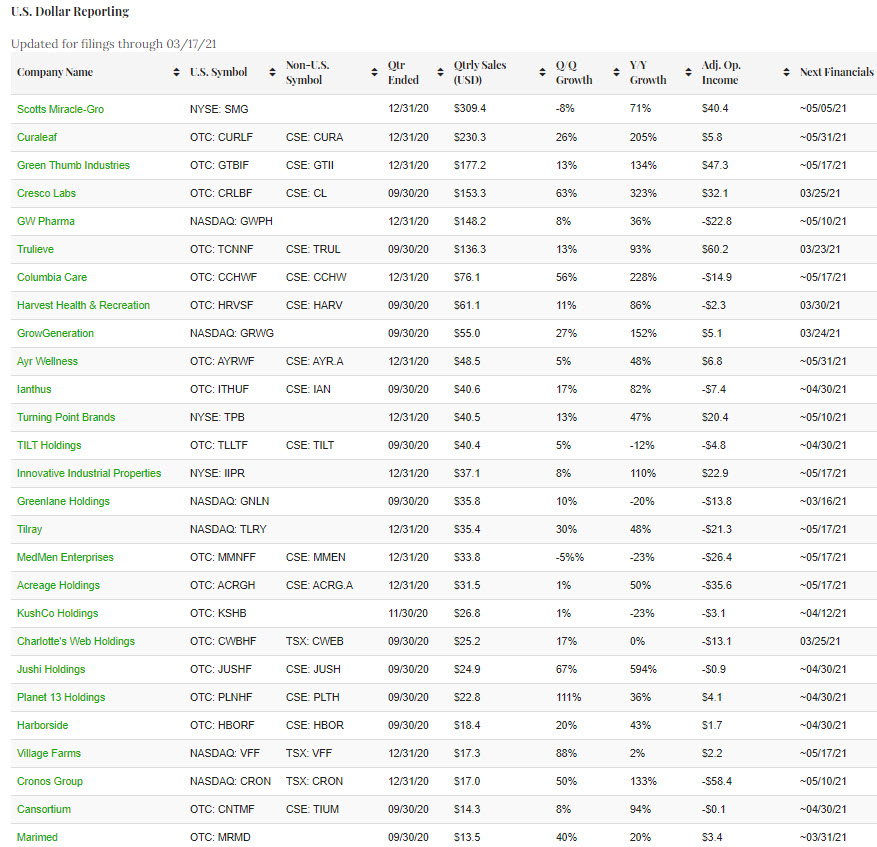 During the balance of March, we will continue to hear from some of the largest cannabis operators as well as many others, and these companies are expected to have experienced very strong growth during Q4. Several companies are now filing with the SEC, and their reports are due in March, while the balance of year-end reports will be due by the end of April for those companies still using IFRS accounting instead of U.S. GAAP. The remaining companies that will be reporting in March and that generated more than $25 million in revenue in Q3 include Cresco Labs (CSE: CL) (OTC: CRLBF), Trulieve (CSE: TRUL) (OTC: TCNNF), Harvest Health and Recreation (CSE: HARV) (OTC: HRVSF),  GrowGeneration (NASDAQ: GRWG),  Greenlane (NASDAQ: GNLN) and Charlotte’s Web (TSX: CWEB) (OTC: CWBHF).

In the first part of March, HEXO Corp (TSX: HEXO) (NYSE: HEXO) reported its fiscal Q2 and retailer High Tide (TSXV: HITI) (OTC: HITIF) reported its fiscal Q4. HEXO reported  revenue slightly ahead of expectations. High Tide had indicated prior to the fiscal Q4 report, which didn’t include a contribution from META Growth, which was acquired after the reporting period, ahead of analyst expectations, which was the case.

For those interested in more information about companies reporting, we publish comprehensive earnings previews for subscribers at 420 Investor, including for Focus List members Charlotte’s Web, Cresco Labs, Greenlane, GrowGeneration, Harvest, TerrAscend and Trulieve.