45 companies currently qualify for inclusion, with 29 filing in U.S dollars and 16 in the Canadian currency, which is the same as when we reported at the end of November.

For companies that report in U.S. dollars, only C21 Investments (CSE: CXXI) (OTC: CXXIF) and cbdMD (NYSE American: YCBD) provided updated financials during December.  C21 experienced 7% revenue growth from Q2 to Q3 as it increased its adjusted operating profit to $1.2 million. cbdMD missed expectations of $10.55 million, with sales of $9.5 million in its fiscal Q4 ending in September representing 18% sequential growth. The company reported that this represented pro forma annual growth of 462% for its CBD business. 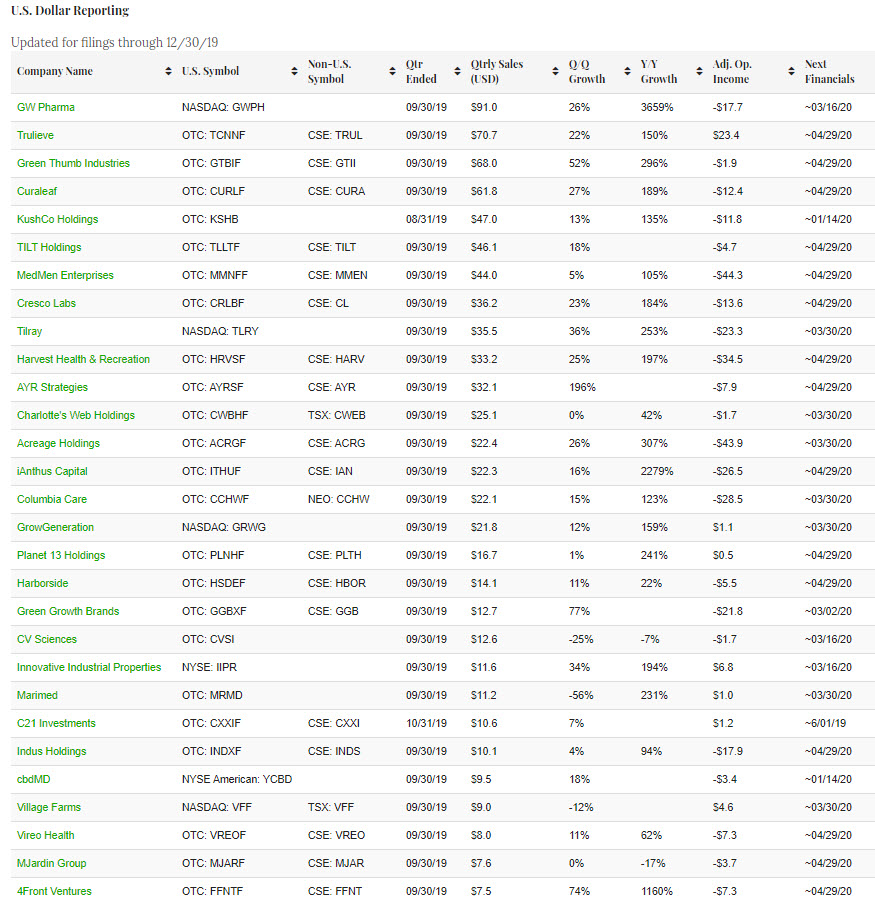 During January, we expect a report from only KushCo Holdings (OTC: KSHB), which has scheduled a conference call for January 8th after the market closes to discuss the results from its FY2020 Q1. According to Sentieo, analysts project revenue at $41.5 million, which would represent a sequential decline of almost 12% but growth from a year ago of 64%. Following Q4 and taking into account its expectations for decreased vaping-related product sales early in its fiscal year, the company provided FY20 guidance ranging from $230 million to $250 million, including $25 million from its newly launched hemp trading business. 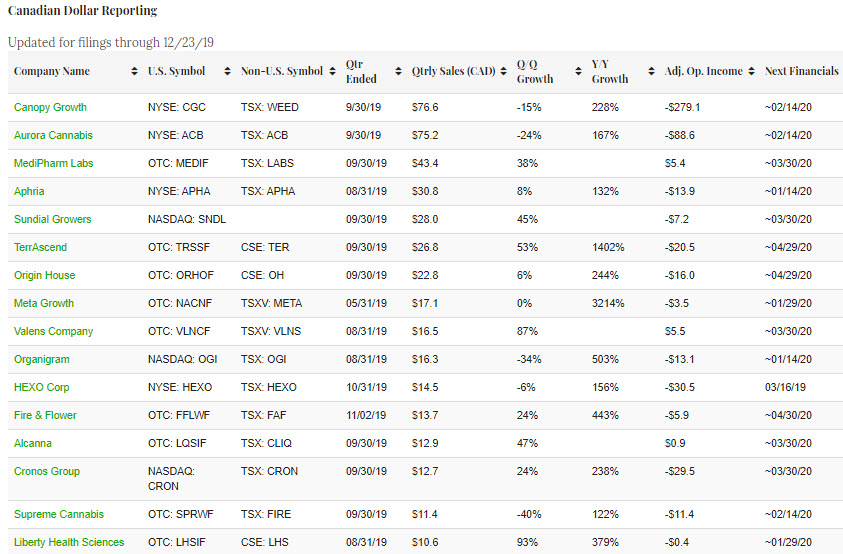 During January, we expect financial updates from LPs Aphria (TSX: APHA) (NYSE: APHA) and Organigram (TSX: OGI) (NASDAQ: OGI) as well as Liberty Health Sciences (CSE: LHS) (OTC: LHSIF). Aphria, which, according to Sentieo, is expected to see revenue expand only slightly from C$126 million in its Q1 to C$130 million in its Q2 ending 11/30, has the vast majority of its revenue generated from outside the cannabis industry, making comparability a challenge. During Q1, pharmaceutical distribution accounted for over 75% of total revenue. Aphria has suggested that it will generate net revenue for the full fiscal year of approximately C$650 million to C$700 million, with distribution revenue representing slightly more than half of the total net revenue. The company will be reporting on January 14th before the market opens. Organigram is expected to deliver Q1 revenue of C$21.3 million, which would represent growth of 31% from Q4 and 71% from a year ago. Finally, Liberty Health Sciences has no estimates available on Sentieo, but it has indicated that its monthly sales at the end of the prior quarter in August exceeded C$4.6 million, suggesting that the company’s revenue should expand significantly from the C$10.6 million reported in Q2.