We have discussed several themes that we expect to play out in 2020, including improved distribution in Canada and in certain American markets, like California, as well as advancement towards legalization in new states, and these are already showing signs of developing as we expected. At the same time, the negative theme of limited capital availability will persist as well. Today we want to highlight another discouraging theme that has emerged: Litigation.

Over the past six months, we have seen many publicly-traded cannabis companies sued by investors, which isn’t too surprising given the direction of stock prices, but we are starting to see additional types of litigation become more prevalent. This week’s lawsuit filed by Harvest Health against Falcon International certainly isn’t the first of its nature, but, with more than $50 million at stake, it’s certainly one of the most important cases in the cannabis industry to date.

One area that has been particularly litigious has been hemp. A good example of the type of litigation we are seeing is failure to perform. Just this week, a hemp farmer in Oregon sued a company for not harvesting its crop as promised and causing an alleged loss of $11 million. More prevalent has been litigation around seeds that don’t produce the promised yields or that are not “feminized” as promised. Another hemp-related litigation category has been the class-action lawsuits filed against CBD producers for selling products that labeled improperly as dietary supplements.

This week, a new type of lawsuit emerged when Trulieve filed a libel lawsuit against a short-seller. While other companies have been attacked in a similar manner, none of them have fired back so aggressively. While we applaud Trulieve’s efforts to defend itself, we wonder if litigation could backfire. A cogent rebuttal followed by continued robust operational performance seems like the way to go.

The spike in litigation is a symptom of problems in the industry rather than a cause. We look forward to the more positive themes playing out, with investors rather than lawyers making money.

A VIP reception on February 6th will kick off the networking at ICBC San Francisco, as speakers, sponsors, and attendees gather at the Hilton Union Square Hotel. This will be a stellar opportunity for attendees to make connections with cannabis entrepreneurs and policymakers from all over the globe. 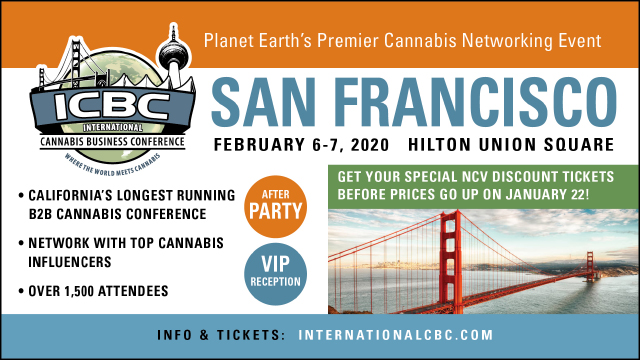 On February 7th the conference curriculum will kick-off. Ticket prices go up on January 22nd, so get your discounted tickets now before early bird pricing expires!