During September, the index included 17 companies, including 14 multi-state operators (MSOs) and 3 focused solely on CBD extracted from industrial hemp. Late in the month, Acreage Holdings was removed due to a corporate action which divided its shares into two new classes of stock. Two companies posted double-digit percentage gains, while most of the others fell more than 10%. Two names fell more than 20%: 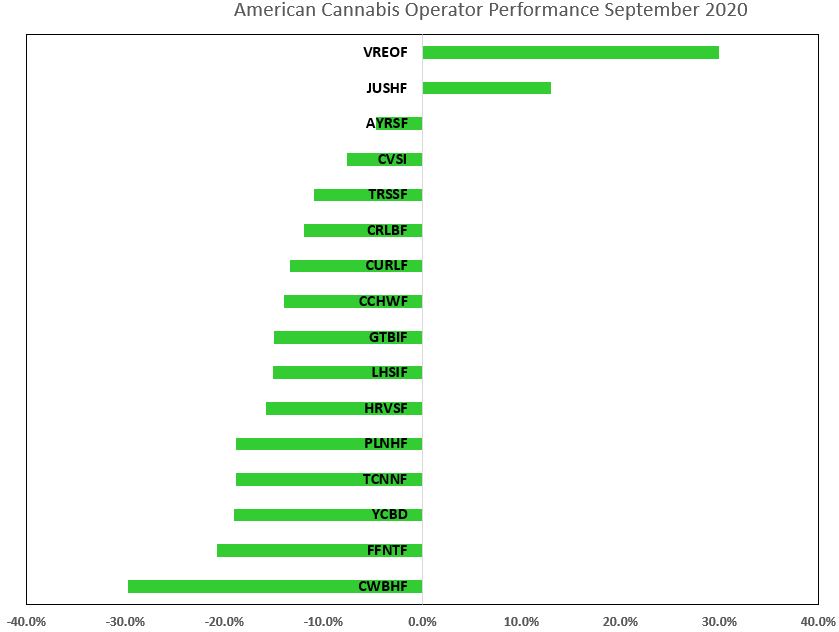 The four best performing stocks included Vireo Health (CSE: VREO) (OTC: VREOF), Jushi Holdings (CSE: JUSH) (OTC: JUSHF), AYR Strategies (CSE: AYR.A) (OTC: AYRSF) and CV Sciences (OTC: CVSI). Vireo, which has declined 3% in 2020, detailed the time-line of the doubling of its Minnesota dispensaries, which are being rebranded as Green Goods, with all four new locations expected to open by year-end. Additionally, CEO Kyle Kingsley disclosed the purchase of 82,563 shares. Jushi, which is up 77% in 2020, extended its rally from mid-July. AYR Strategies, one of the strongest stocks in August after it announced an expansion into Pennsylvania, held on to most of its gains during September and is up 34% this year. CV Sciences rebounded from very weak performance in August and remains down 46% year-to-date.

The four worst performing stocks included Charlotte’s Web (TSX: CWEB)(OTC: CWBHF), 4Front Ventures (CSE: FFNT) (OTC: FFNTF), cbdMD (NYSE American: YCBD) and Trulieve (CSE: TRUL) (OTC: TCNNF). Charlotte’s Web reported its Q2 during the month and lowered its outlook. The stock has been one of the weakest stocks for each of the past four months and is down 69% in 2020. 4Front exited Maryland through the sale of three dispensaries. The stock has gained 27% year-to-date. cbdMD, one of the weakest names in August as well, signed a distribution agreement with Life Time. It has far outpaced its peers in the CBD space, falling just 7% thus far in 2020. Trulieve, one of the strongest stocks in August and still up 56% year-to-date, announced an expansion into Pennsylvania through acquisition and also sold 4.7 million in an underwritten offering.

For October, the number of names in the index will remain at 16.

In the next monthly review, we will summarize the performance for October and discuss any additions or deletions. Be sure to bookmark the page to stay current on American cannabis operators stock price movements within the day or from day-to-day.