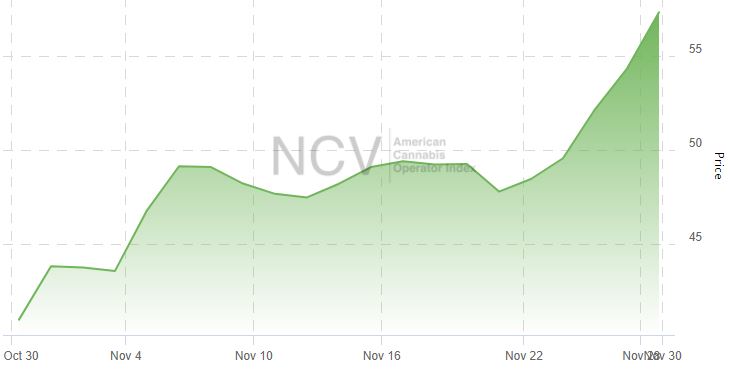 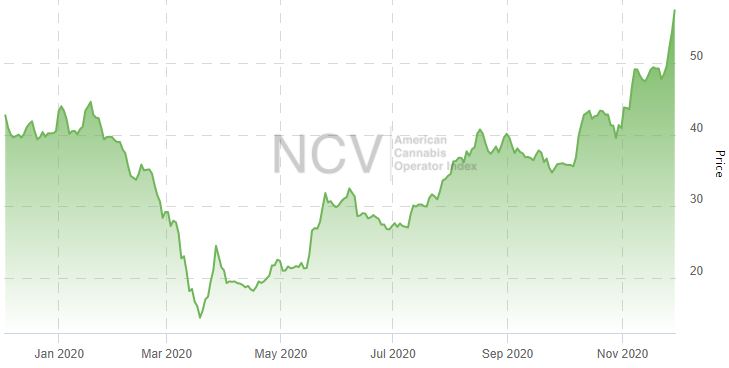 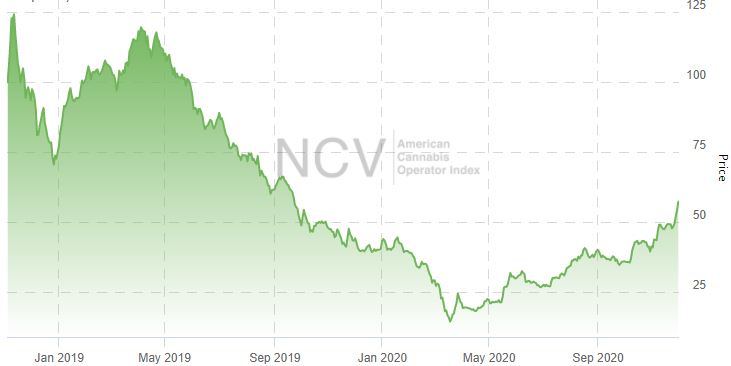 During November, the index included 17 companies, including 14 multi-state operators (MSOs) and 3 focused solely on CBD extracted from industrial hemp. Three companies posted gains in excess of 50%, while none rose by less than 10%: The four best performing stocks included Charlotte’s Web (TSX: CWEB) (OTC: CWBHF), TerrAscend (CSE: TER) (OTC: TRSSF), Planet 13 (CSE: PLTH) (OTC: PLNHF) and Ayr Strategies (CSE: AYR.A) (OTC: AYRSF). Charlotte’s Web, which is down 32% year-to-date, had sold off sharply over the summer following its acquisition of Abacus Health Products for stock, an equity offering and disappointing Q2 financials. In November, it reported a better Q3, with its CBD business growing again. TerrAscend, which has rallied 431% in 2020 and was the best performer in October, was strong ahead of the NJ adult-use ballot initiative last month and likely benefited from its passage this month. The company boosted its 2020 outlook and provided guidance for revenue and adjusted EBTITDA to expand sharply in 2021 when it reported its Q3 financials during the month, suggesting that revenue will be at least C$196 million in 2020 and C$360 million next year, with adjusted EBITDA in excess of C$54 million in 2020 and C$140 million in 2021. Planet 13 posted very strong financial performance in Q3 despite the slow recovery of tourism in Las Vegas, with revenue expanding 111% sequentially and 36% from a year ago. The company expects to open its first dispensary outside of Nevada in 2021, in California, and its stock has gained 156% year-to-date. Ayr Strategies, like Planet 13, rebounded sharply in Nevada as well as in Massachusetts, reporting sequential revenue growth of 61%, with adjusted EBITDA more than doubling sequentially to $19.3 million, 42% of revenue, in Q3. The company announced its entry into Arizona through a pending acquisition and began to close some of its other acquisitions that will expand its operations in the northeast to Ohio and Pennsylvania. Its stock has rallied 125% in 2020.

The four worst performing stocks, all of which rallied, included Liberty Health Sciences (CSE: LHS) (OTC: LHSIF), Curaleaf (CSE: CURA) (OTC: CURLF), Columbia Care (CSE: CCHW) (NEO: CCHW) (OTC: CCHWF) and Trulieve (CSE: TRUL) (OTC: TCNNF). Liberty Health Sciences has been one of the weakest names in the index among licensed cannabis operators in 2020, declining 20% this year. Weekly data shows that the company is not only losing market share in Florida but also that its unit sales are declining on a quarterly basis. The other three weakest performers are among the largest MSOs, which generally lagged their smaller peers. Additionally, these three reported results that were reasonably in line with prior expectations when they reported Q3 financials during the month rather than beating estimates. Curaleaf, which is up 74% in 2020, and Columbia Care, which has gained 74% as well, have both recently closed stock-based acquisitions, and some of that stock is free-trading, which may have weighed on the returns in November. Trulieve, which remains the most profitable MSO, grew revenue 13% during Q3 compared to Q2 and 51% compared to a year ago, well below its peers. The company closed two acquisitions in Pennsylvania during the month which will help drive growth in 2021. Its stock is up 152% in 2020.

For December, the number of names in the index will increase to 20 with the addition of Harborside (CSE: HBOR) (OTC: HBORF) MariMed (OTC: MRMD) and Red White & Bloom (CSE: RWB) (OTC: RWBYF)