Canabo Medical (TSXV: CMM) (OTC: CAMDF) announced that it has closed its $8.4 financing with Aphria (TSXV: APH) (OTC: APHQF), selling the licensed producer 6mm shares at $1.40 in a private placement. The deal, which was originally announced on 12/7, gives Aphria a 15.6% stake on a fully-diluted basis in the company, which operates 10 Cannabinoid Medical Clinics (CMClinics) in Canada, working with patients only on a physician-referral basis in order to evaluate for the suitability, prescribing and monitoring  of cannabinoid treatments for a variety of illnesses.

Canabo is one of the largest and most respected referral clinics in the country. It’s commitment to educating both patients and physicians when it comes to prescribing cannabinoid treatment to effectively manage patients suffering from chronic pain and disabling illnesses, has resulted in Canabo becoming a market leader in cannabinoid medicine and assuring it is playing a meaningful role in improving the quality of life of their patients, consistent with the values we hold at Aphria. We very much look forward to working closely with them as part of this strategic investment.

Aphria paid a big premium to acquire its minority stake. In September, prior to trading publicly, the company sold almost 7mm shares at $0.50.  On the day before the private placement deal was announced, Canabo Medical closed at $1.03, so the $1.40 private placement purchase price represented a 36% premium and was above $1.28, the highest trading price since the stock debuted on November 9th following its reverse-merger. Canabo Medical closed at $0.86 on December 22, representing an unrealized loss of 38.6%. 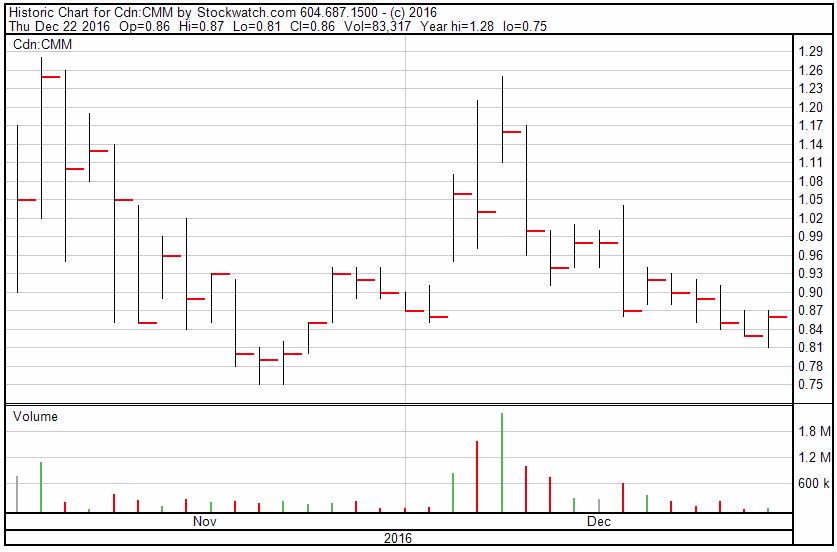 Canabo Medical, which expects to have over 15,000 patients at the end of 2016, has given guidance for projected sales for the next two fiscal years ending in October of $7mm in FY2017 and $11mm in FY2018.  In the first nine months of FY16 ending 7/31/16, the company generated total sales of $1.32mm, with 63% coming from medical consultations, 32% from research revenue and the balance from product sales (non-cannabis). After Aphria’s investment, which gives the company approximately 38.3mm fully-diluted shares, the market capitalization is $33mm.

Aphria has also made a series of investments in CannaRoyalty (CSE: CRZ) (OTC: CNNRF), a recent reverse merger that is focused on intellectual property and licensing which has issued a royalty-bearing license to Aphria for the use of some of its offerings in Canada. In June, it invested $1.5mm, purchasing 1.5mm units that included 1.5mm common shares and 750K warrants at $1.50, which it later exercised, investing an additional $1.15mm to buy 750K shares. It also invested $1.5mm in October into convertible debentures that convert at $2 per share and purchased 250K shares for $2 in September. Assuming exercise of all of its securities, Aphria owns over 8%  (3.25m shares) of the fully-diluted shares of CannaRoyalty.

Finally, Aphria invested $1mm into publicly-traded Tetra Bio-Pharma (CSE: TBP) (OTC: GPROF) in a transaction announced  on December 6th. The company bought 5mm units at $0.20 per share, with each unit consisting of a common share and a warrant to buy shares at $0.26 within three years. In November, the two companies announced a supply agreement, with Aphria being named the exclusive supplier of the dried medical cannabis to serve as the active pharmaceutical ingredient (API) to be used in Tetra Bio-Pharma’s clinical trials for its PhytoPain Pharma’s development of PPP001, a prescription controlled drug for inhalation using a fully assembled titanium pipe.

Update: We amended this article to restate the ownership position in CannaRoyalty and to remove reference to Radient Technologies and add the reference to Tetra Bio-Pharma