This morning, New Cannabis Ventures received anonymously an audio recording of a conversation between former CEO Hadley Ford of iAnthus (CSE: IAN) (OTC: ITHUF) and an investor. We were able to confirm with the investor, who was aware that it had been leaked, that the recording is legitimate, though he claimed to have no involvement in sharing the information and had no intention for it to become public. The conversation, which took place in early October, conveys Ford’s perspective of the events leading to a plan of arrangement that will leave current shareholders with just 2.75% of the company. An appeal of the recapitalization transaction will be heard tomorrow at the Supreme Court of British Columbia.

Oasis loaned money to iAnthus in 2019. Ford alleged that in June, afterwards, principal Alex Shoghi accused the company of violating debt covenants, something that Ford believes was contrived in order to get better terms, including renegotiating $6 options lower to market prices, which were much lower.

According to Ford, in late 2019, it became clear that Gotham was not going to advance the full remaining $40 million it had committed, but the company was optimistic that it would receive $20 million in January. Ford alleged that Shoghi called in early January, bringing up the covenant issue again, which the company continued to dispute. He claimed that he shared a letter with Jason Adler, who responded, according to Ford, that they weren’t going to “negotiate with terrorists.” Ford claims that Shoghi threatened the company by saying that he would issue a press release that would lead to the stock price declining. He even suggested that Soghi may have been shorting or conspiring with short sellers to push the stock lower. At a certain point, a lower stock price would have effectively prevented further financing by iAnthus, according to Ford.

At this point, Gotham’s tone changed dramatically. The company was racing to complete the Gotham financing, and Gotham, according to Ford, was trying to reduce the pending loan to $15 million. Ford, who perceived that Gotham was having trouble getting the funds, began to look for alternative financing. According to Ford, he wanted to do a sale-leaseback transaction to raise $40 million, an idea initially well received by Adler. Ford purports that Shoghi talked Adler out of it, alleging that they began to conspire to seize control of the company.

Speaking of his communication with Adler on March 24th, Ford said that he was told by him that “We are going to take your company private… We are going to wipe out the public shareholders holders and the junior guys, and then we are going to recharge the management team.”

Indeed, Adler’s plan is playing out, with current equity holders about to have their ownership diluted substantially if the pending recapitalization is finalized. It’s not clear why the Board of Directors, which has seen several members depart, didn’t just file for bankruptcy, especially in light of the recovery for stock prices over the past ten months. iAnthus reported Q3 revenue of $40.6 million, up 82% from a year earlier, with a sharply reduced operating loss. The stock, ahead of the pending recapitalization, trades at a fraction of where it began 2020, while its peers have experienced dramatic gains. 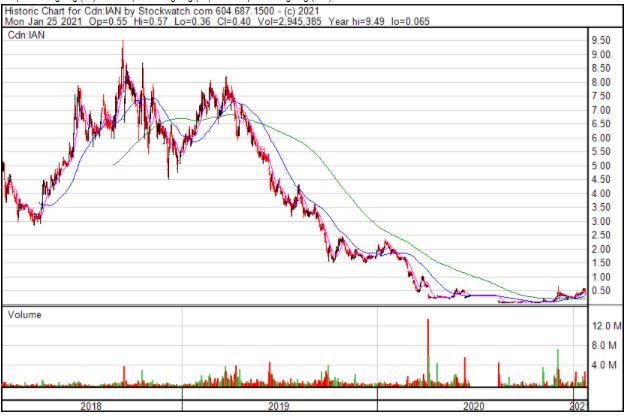 Ford alleged that Canaccord, which was hired by iAnthus to conduct a strategic review, failed to find an alternative buyer, suggesting that a leading MSO was interested in making a bid of $200 million that somehow didn’t get presented to the board. A separate recording suggested that Beth Stavola, formerly a director and the Chief Strategy Officer of iAnthus, was trying to broker that deal.

We have summarized only Ford’s views, but shareholders should be concerned if there was collusion between lenders, as he alleges. Additionally, investors deserve to understand why the Board of Directors hasn’t pursued alternatives that may have put shareholders in a better position.