After a massive 17.7% decline in February, the Canadian Cannabis LP Index recovered just some of the losses in March, rallying 0.8% after having been up more than 13% earlier in the month: 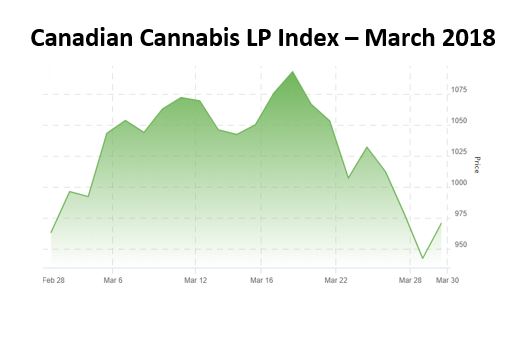 The LPs rallied in the first half of the month, peaking on March 19th at 1093.18, up 13.5%, but the detailing of proposed packaging rules released by Health Canada that day weighed on the sector, as they were viewed as overly strict. Another factor was the scare created by CBC on the morning of March 22, when the newspaper suggested that C-45, the bill to legalize, might be voted down by the Canadian Senate. Finally, weakness in the broader equity markets in late March was likely a contributing factor as well.

Tier 1, which includes the LPs that are generating sales of at least C$4 million per quarter, fell 2.1% after having declined 10.7% in February and is down 2.3% year-to-date. This group included Aphria (TSX: APH) (OTC: APHQF), Aurora Cannabis (TSX: ACB) (OTC: ACBFF), CanniMed Therapeutics (TSX: CMED) (OTC: CMMDF), CannTrust (CSE: TRST) (OTC: CNTTF), Canopy Growth (TSX: WEED) (OTC: TWMJF) and MedReleaf (TSX: LEAF) (OTC: MEDFF). Within the group, Canopy Growth was the clear winner, rising 23.1%. CanniMed was the only other LP to post a gain, while Aphria, down 13.2%, was the worst performer for the second consecutive month and is down 38.6% year-to-date.

Tier 2, which includes the remaining LPs that are generating sales, produced the lowest returns, declining 2.5% after having declined 21.2% in February and is down 5.0% year-to-date. Newstrike Resources (TSXV: HIP) (OTC: NWKRF), up 40.7%, was the strongest performer. Cronos Group (TSXV: CRON) (NASDAQ: CRON), which was the group’s big winner in February, gaining 31% after its uplisting to the NASDAQ, lost 26.6% in March after it priced a C$100 million equity offering. Three other members of Tier 2 lost more than 10%, while two gained more than 10%.

Tier 3, which includes the LPs that are licensed to cultivate but not yet approved to sell, rose 6.6% after having declined 18.9% in February and is up 5.8% year-to-date. TerrAscend (CSE: TER) (OTC: TRSSF), which was the only member to post a gain in February, led the way in March, rising 59.2% after receiving approval from Health Canada to begin selling dried cannabis.

The returns for the overall sector varied greatly, with three stocks rising more than 20% while two fell in excess of 20%: 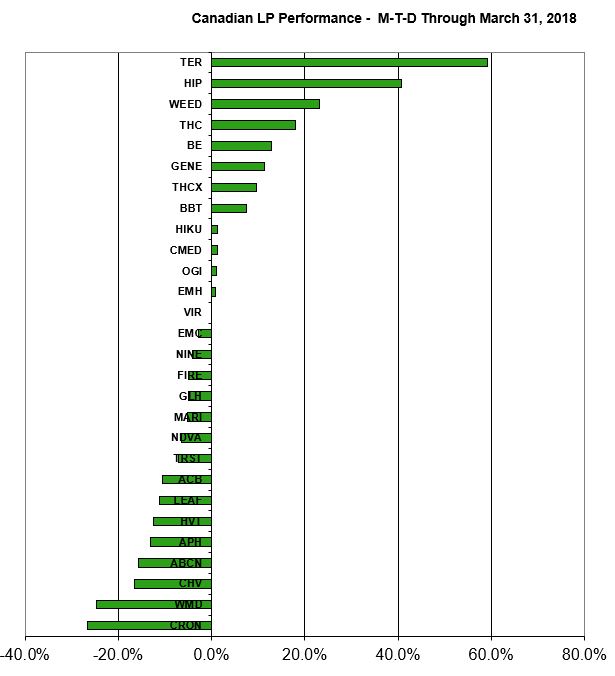 For April, the overall index will have one deletion, CanniMed Therapeutics, which has been 96% acquired by Aurora Cannabis. As a result, Tier 1 will now include just 5 companies. Three new names will be added, all into Tier 3: Aleafia Health (TSXV: ALEF) (OTC: CAMDF), Namaste Technologies (CSE: N) (OTC: NXTTF) and RavenQuest BioMed (CSE: RQB) (OTC: RVVQF). Additionally, TerrAscend is now included in Tier 2.