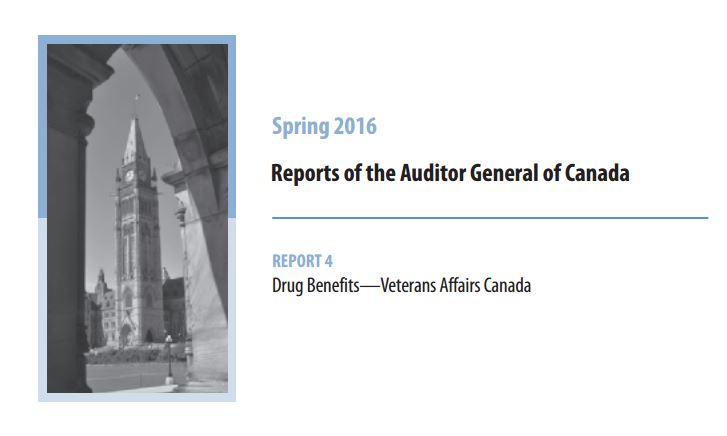 The Auditor General of Canada presented the results of five audits to Parliament today, one of which covered Veterans Affairs Canada:

Our Spring reports also provide the results of our most recent audit of Veterans Affairs Canada. This audit focused on how the Department is managing drug benefits for veterans.

With respect to cannabis, the report details a large increase in expenditures since MMPR was implemented in 2014, with total expenditures on an annualized basis 40 times the level prior to its implementation:

The chart indicates an average of over $1K per month spend for 1320 Veterans.  The maximum monthly reimbursement (at the 10g per day limit and $14 per gram) is approximately $4200 per month.  In fact, the Auditor General reports that more than 25% of these patients are accessing the full 10g per day (or more) limit:

According to the report:

In June 2013, the Health Canada Marihuana for Medical Purposes Regulations were enacted, while the old regulations were repealed in March 2014. The new regulations simplified the requirements for obtaining access by permitting any physician or nurse practitioner to authorize the utilization of marijuana for medical purposes, and the restrictions of use for specific medical conditions were removed. The Department estimated that the cost rose significantly, from $5 to between $6 and $14 per gram, because commercial producers became responsible for providing the drug and setting prices. We found that before these new regulations were passed, Department officials had identified that they would likely cause an increase in the number of veterans requesting marijuana for medical purposes, increasing the Department’s expenditures. Despite acknowledging this in advance, it did not establish a dollar limit for covering marijuana for medical purposes.

The Auditor General made a recommendation:

Veterans Affairs Canada should explore ways in which the costs associated with marijuana for medical purposes can be contained.

According to the Auditor General, the Veterans Affairs Canada will make changes within a year:

Veterans Affairs Canada will develop a policy on marijuana for medical purposes, putting the health, well-being, and safety of our veterans at the forefront. The Department will leverage medical expertise to identify the most efficient and effective approach. This may require regulatory consideration. This policy will be developed and implemented by May 2017.

To the extent that licensed producers (LPs) are generating sales at high prices from Veterans who are accessing more than 5 grams per day (the limit for prescriptions in general is 5 grams per day, and most LPs report average order size of 1 gram per day), there could be a threat to sales.  Most likely, some LPs have better penetrated the Veterans market than others, and their risk would then be higher.

The publicly-traded LPs don’t officially report the amount of sales to Veterans in their filings, but OrganiGram (TSXV: OGI) (OTC: OGRMF) CEO Denis Arsenault recently stated in an interview that his company’s sales to Veterans represent 20-25% of overall revenue. One can look at the balance sheets to determine the approximate exposure to the Veterans population by examining Receivables, as the LPs are paid in arrears under the reimbursement.

While Veterans Affairs Canada may curtail some expenditures, Veterans are likely to continue to receive generous reimbursement (as they should!).  With the overall market growing rapidly and legalization on the horizon, any sort of impact from reduced reimbursement is likely to provide only a short-term headwind to the LPs.