Horizons Medical Marijuana Life Sciences ETF (TSX: HMMJ) (OTC: HMLSF), the world’s first and still only cannabis ETF, has adjusted its portfolio this month as its benchmark, the North American Marijuana Index, was updated in a quarterly rebalancing. The fund manages a portfolio that was valued at C$139mm as of September 19th.

Soloactive, which maintains the index, has minimum market capitalization and daily trading value requirements and describes the index:

The North American Marijuana Index tracks the performance of a basket of North American publicly listed companies with significant business activities in the marijuana industry. A company is deemed to be eligible for inclusion in the index by the Index Provider if the company is a producer and/or supplier of marijuana and/or cannabis, biotechnology companies that are engaged in research and development of cannabinoids, companies that offer hydroponics supplies and equipment clearly aiming to increase efficiency in marijuana cultivation and companies mainly engaged in leasing property to cannabis growers.The index is calculated as a gross total return index in CAD and adjusted quarterly.

Here is the complete list of holdings as of September 18th: 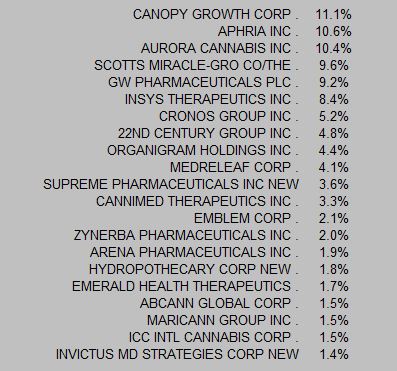 The fund has recently added MedReleaf (TSX: LEAF) (OTC: MEDFF) and has also increased its exposure to Insys Therapeutics (INSY)  following the index adjustments. HMMJ’s top six holdings represent 59.3% of the portfolio, with the remaining exposure spread among 15 names. Large Canadian LPs comprise 39.5% of the ETF, with Canadian LPs representing a total of 62.7%. HMMJ has no exposure to the U.S. legal cannabis market except very indirectly through its positions in Scotts Miracle-Gro (NYSE: SMG) and 22nd Century Group (NYSEMKT: XXII). The balance of the exposure is to primarily biotech stocks, most of which are developing synthetic cannabinoids.