This is a copy of the March 31st edition of our weekly Newsletter, which we have been publishing since October 2015.

What a great way to begin 2019! During Q1, the Global Cannabis Stock Index, which is professionally managed by New Cannabis Ventures, gained in each of the three months, with a total return for the quarter in excess of 57%. Of course, this happened after a rough Q4. For those who stuck with the sector, the big gains in Q1 returned the index to highs from early November. The market is still down from the early 2018 highs around the California legalization for adult-use as well as the subsequent highs in October as Canada was legalizing adult-use. 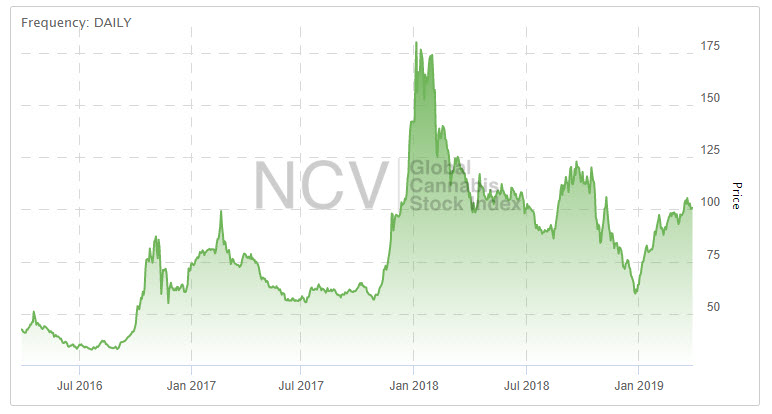 Longer-term, the bull market remains intact from our perspective, with summer lows from 2016 and 2017 well below the current market. The quality of public companies as measured by access to capital and revenue generation continues to improve. The days where the market was represented by silly penny stocks are far behind us, and we are seeing more sophisticated investors and larger pools of capital dedicated to the sector. We continue to see substantially more serious coverage by mainstream financial media as well.

As we look out over the balance of the year, we are encouraged that the advance can continue, though most likely not at a clip of 57% per quarter! In the United States, we see, perhaps most importantly, a broadening base of investors, perhaps as a consequence of several Canadian LPs migrating their U.S. listings to major exchanges and the more pronounced coverage of the sector by outlets like CNBC, Reuters, Investors Business Daily and Barron’s. It appears that many American investors have gotten more comfortable trading American cannabis companies either directly on the CSE or the OTC, where trading volumes have exploded for several of the MSOs. We think the regulatory outlook at the federal and state levels is favorable, and we expect continued consolidation of the space and the reporting of increasingly substantial revenue and more favorable earnings are likely to keep investors interested in the space over the balance of the year. Another driver could be the NASDAQ opening up to ancillary companies like Greenlane and Hydrofarm. We think this will expand the U.S. investor base even further.

In Canada, we expect the near-term challenges to diminish as many of the companies scale up production, which will likely benefit some of the LPs. Other drivers for LPs will likely be advancements made in their international efforts, and we continue to anticipate that some LPs will be more aggressive about entering the U.S., perhaps even risking their TSX or TSXV listings. Canadian retailers will be reporting substantial revenue, which could attract investor interest to this sub-sector, and we expect that later this year the path for expansion in Alberta and Ontario will be more clear. Finally, we expect that the introduction of edibles and extracts later this year could help the LPs and retailers in Canada. One caveat that we must share is that the elections later this year could yield a change in leadership. While Conservatives regaining control of the federal government wouldn’t lead to the end of legalization, we fear that it could create a less favorable environment.

We will be providing our regular monthly review of the Global Cannabis Stock Index as well as the Canadian Cannabis LP Index and the American Cannabis Operator Index later today, but we wanted to share with our readers a quarterly perspective. The index, which began the quarter with 43 members, ended with 41 due to mergers. Of the 41 names in the index, the median return was 45.8%. Despite the strong market, six names produced negative returns. On the other hand, three names more than doubled in price. Below is the complete list, sorted by returns. Since 2013, the Global Cannabis Stock Index has continued to represent the overall publicly-traded market for the medical and legal marijuana sector with quarterly rebalancing of the most actively traded companies.

One of the trends we observed was the strength in revenue-generating Canadian LPs, with names like HEXO Corp and Organigram among the best returning stocks and Aurora Cannabis, Supreme Cannabis and Canopy Growth all better than average. These companies are all in the top two tiers of the market as defined by revenue generation. Another trend was the strength in CBD, with Elixinol Global and Charlotte’s Web beating the index return. Finally, it should be clear that similar companies in terms of focus can produce sharply different returns. For example, two of the worst performers were Canadian LPs despite that sub-sector being strong. At the same time, performance across the MSOs varied greatly as well.

So, the dismal finish to 2018 is behind us, and investors are embracing the cannabis sector once again. We look forward to the the balance of the year.

For investors interested in the cannabis industry and for operators looking to tell their stories to potential investors, there is no better event than the Benzinga Cannabis Capital Conference. After highly successful events in Miami and Toronto in recent months, Benzinga returns to Toronto at the Fairmont Hotel on April 17-18, and we are excited to partner with them again.

Our readers can save 20% off by using the code “NCV” at check out.

For high quality companies interested in presenting, please email PatrickLane@Benzinga.com to learn about the many opportunities available.