Investors in the cannabis sector have the ability in the vast majority of cases to invest in companies that trade in both the United States and in Canada. American investors who typically prefer to have trades denominated in U.S. dollars can access almost every cannabis stock no matter where it is listed primarily. While the majority of stocks are listed in primarily in Canada on either the Canadian Securities Exchange, the Toronto Stock Exchange, the TSX Venture or the NEO Exchange, almost all of these have listings on either the OTC Markets or, increasingly, higher exchanges like the NASDAQ, NYSE or NYSE American. Because of this, many American investors may not feel compelled to have accounts that permit them to trade directly in Canada.

Similarly, Canadian investors can access the vast majority of the market, including companies that operate either in Canada, the U.S. or even globally, in Canada, and they may not see the need to have an account that permits trading in U.S. stocks in order to capture the few stocks without Canadian listings. I believe that investors and especially active traders in the cannabis sector should consider having accounts that permit trading in both American and Canadian securities.

One of the big advantages for Canadian investors to having a U.S. account is the ability to trade before and after the market is open. This is important especially following important news releases, including earnings reports. Increasingly, Canadian LPs are listing on the major U.S. exchanges and trade regularly before and after the market open, often in substantial size. At present, Canadian LPs listed on major exchanges in the U.S. include Aphria (TSX: APHA) (NYSE: APHA), Aurora Cannabis (TSX: ACB) (NYSE: ACB), CannTrust (TSX: TRST) (NYSE: CTST), Canopy Growth (TSX: WEED) (NYSE: CGC), Cronos Group (TSX: CRON) (NASDAQ: CRON), HEXO Corp (TSX:HEXO) (NYSE AMERICAN: HEXO) and Village Farms (TSX: VFF) (NASDAQ: VFF). Canadian investors in these companies and the others that will join them can put themselves into a better position to adjust portfolios outside of normal trading hours by having an account that permits U.S. trading.

While at least Interactive Brokers offers pre-market trading  for U.S. stocks that trade over-the-counter,  no other firms appear to do so (and none offer after-hours trading). Still, for some Canadian names beyond those listed on major exchanges in the U.S., it is also possible to trade pre-market.

While many companies listed in Canada generate higher trading volume on Canadian exchanges rather than the U.S. ones, this isn’t always the case. Whether it is the largest of the LPs, like Aurora Cannabis or Canopy Growth, which trade on the NYSE, or many of the CSE-listed American cannabis operators, the volume in the U.S. can often be bigger there than for the primary listing in Canada. Cronos Group trades over 5X the volume on the NASDAQ as it does on the TSX, while Aurora Cannabis and Canopy Growth trade more than 2X on the NYSE than on the TSX: 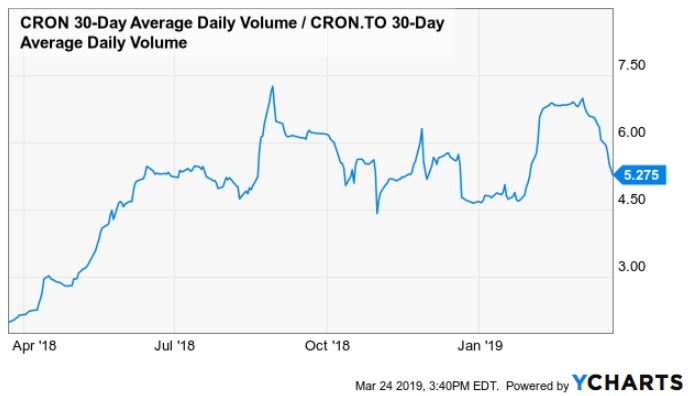 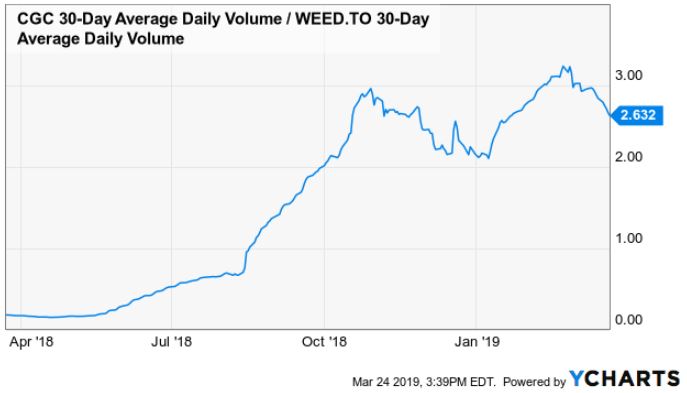 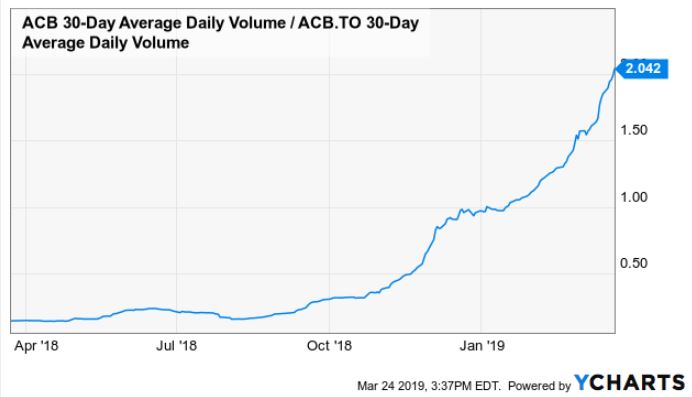 At the same time, many of the American cannabis companies see substantially higher volume in Canada. For traders and investors concerned about getting the best possible price on their buys and sells, it makes sense to trade in the market with the highest trading volumes. While Curaleaf Holdings (CSE: CURA) (OTC: CURLF) trades actively in the U.S., the American trading volume is dwarfed by that in Canada, which trades more than 1.6X higher on average: 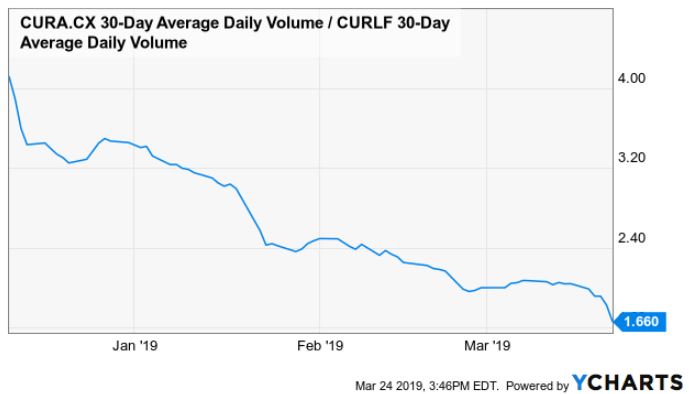 Canadian investors should appreciate the trends in the market, as the broadening participation of U.S. investors, hastened by the NYSE and NASDAQ listings, is leading to shifts in trading volumes to the U.S. away from Canada for even OTC-listed stocks. A good example beyond Curaleaf Holdings, which still trades more frequently in Canada, is Charlotte’s Web (CSE: CWEB) (OTC: CWBHF), which trades a similar volume now in both markets: 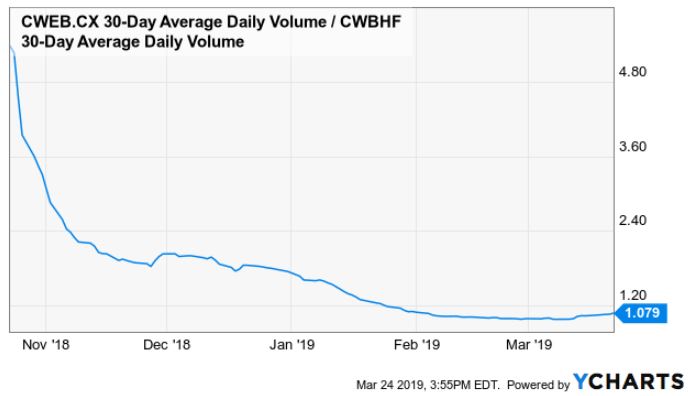 Finally, investors should be aware that at least some CSE-listed or TSXV-listed companies don’t have official listings on the OTC, and these trades can take place at sub-optimal prices. By having the ability to trade in both the U.S. and Canada, investors can pick the appropriate market for each stock.

This last point is a bit surprising, but there are examples of the Canadian exchanges halting trading in securities pending news releases but trading in the U.S. isn’t halted. Canadian investors, in these cases, can benefit from having U.S. accounts that would then permit them to buy or sell the stocks when they can’t trade in Canada. One very recent example that goes well beyond news dissemination is Cannex Capital (CSE: CNNX) (OTC: CNXXF), which was halted on 2/28 ahead of the 3/1 announcement of its definitive merger agreement with 4Front. It remains halted, yet it continues to trade on the OTC. The company provided an update in mid-March and noted:

The Transaction is expected to constitute a “fundamental change” for Cannex, as defined in CSE policies. Pursuant to CSE policies, the Company’s stock has been halted and will remain halted until all required documentation with respect to the Transaction has been received by the CSE and the CSE and applicable securities regulatory authorities are otherwise satisfied that the halt should be lifted.

Much of the Cannabis market trades in Canada primarily, with secondary trading in the U.S. Many Canadians and Americans trade only in their own currency, but, by doing so, they may be missing out on opportunities. Canadians who have the ability to trade in USD can gain access to pre-market and after-hours trading, can sometimes get better liquidity in the U.S and can find ways at times to trade securities that are halted in Canada. Americans who have the ability to trade in CAD are often able to gain substantially better liquidity, improving execution prices on their buys and sells.